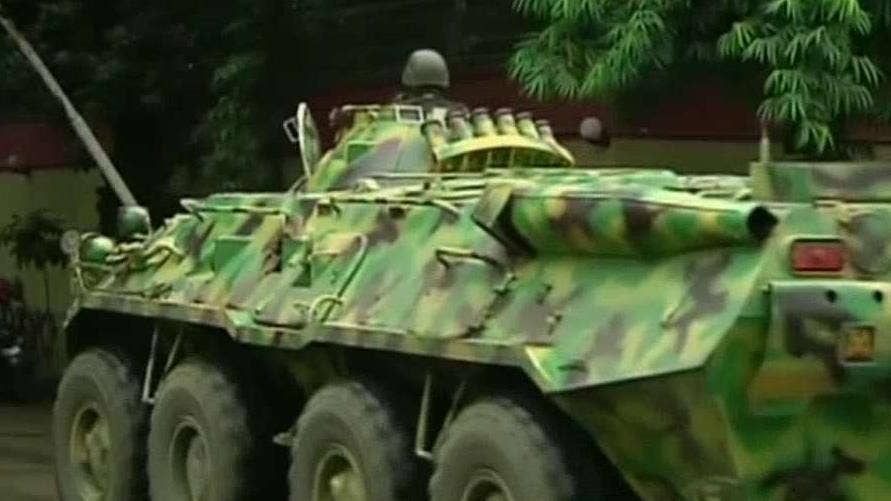 Bangladeshs Prime Minister vowed Saturday to fight terrorism at all costs after 20 people were killed after Islamic gunmen took dozens of hostages during a 10-hour siege at a restaurant.

The victims included two students from Emory University in Georgia and nine Italians.

Prime Minister Sheikh Hasina condemned the attack while pledging to stand up and fight the terror threats that has mushroomed in the country, Reuters reported.

We are committed and determined to uphold or freedom, Hasina said, adding that Bangladesh will fight the terror threat at all costs.

Our thoughts and prayers go out on behalf of Faraaz and Abinta, their friends and family for strength and peace at this unspeakably sad time

Early Saturday, a Bangladeshi commando raid supported by armored vehicles resulted in the deaths of at least six attackers and the capture of a seventh. Thirteen hostages were rescued. Two police officers were killed in an earlier gun battle with the militants.

The Islamic terror group ISIS claimed responsibility for the attack on the cafe, according to the SITE Intelligence Group, which monitors jihadist activity online. The ISIS-affiliated Amaq news agency posted photos purportedly showing the bodies of hostages, though their authenticity could not be immediately confirmed.

At a news conference, Army Brigadier General Naim Asraf Chowdhury said most of the victims “were killed mercilessly” with sharp weapons on Friday night.

Earlier, a police official told AP that that five bodies were seen lying in pools of blood at the restaurant. It was not immediately clear whether they were the remains of militants or hostages.

A Bangladeshi army spokesman said all the victims were foreigners.

Italian Foreign Minister Paolo Gentiloni said the bodies of nine Italians have been identified among the dead.

A Japanese government spokesman said that seven Japanese were among those killed in the siege.

Emory students Abinta Kabir and Faraaz Hossain were among those taken hostage and murdered by the terrorists who stormed the café, Emory President James Wagner said in a message Saturday on the universitys website.

Wagner said Kabir was from Miami and was in Dhaka visiting family and friends. He said Hossain just graduated and was enrolled in Emorys business school for the fall.

“The Emory community mourns this tragic and senseless loss of two members of our university family,” Wagner said. “Our thoughts and prayers go out on behalf of Faraaz and Abinta and their families and friends for strength and peace at this unspeakably sad time.”

A Bangladeshi police official said two Sri Lankans were rescued Saturday, while local media reported that an Argentine and two Bangladeshis escaped prior to the raid.

Rezaul Karim, the father of a Bangladeshi businessman who was rescued along with his family, said the attackers did not harm any hostage who could recite verses from the Islamic holy book, Koran.

Karim said his son, Hasnat, had gone to the restaurant along with his wife and two children to celebrate the birthday of his elder daughter when the attack happened. “He told me, `Please save us, please!’ And he hung up,” he said.

Karim said his son told him that the attackers “did not hit people who could recite verses from the Koran. The others were tortured,” he said.

“The gunmen asked everyone inside to recite from the Koran. Those who recited were spared. The gunmen even gave them meals last night,” Karim said.

He said detectives were questioning his son and his family as part of the investigation.

Police said the two officers died at a hospital after being wounded in the initial gunfight with the attackers, who also hurled bombs. Ten of 26 people who were wounded when the militants opened fire were in critical condition, and six were on life support, according to hospital staff. The injuries ranged from broken bones to gunshot wounds. Only one civilian was among the wounded.

The attack marks an escalation in the growing drumbeat of militant violence to hit the traditionally moderate Muslim-majority nation in the past three years, but with increasing frequency in recent months. Most attacks have been by machete-wielding men singling out individual activists, foreigners and religious minorities.

Bangladesh did not immediately respond to the claim of responsibility by ISIS, but in the past have denied that the extremist group has a presence in the country. The U.S. State Department said it had seen the ISIS claim, but could not confirm its authenticity.

In Washington, a White House official said President Barack Obama was briefed on the attack by his chief counterterrorism adviser Lisa Monaco. The president asked to be kept informed as the situation develops, said the official, who was not authorized to speak publicly about the president’s meetings.

State Department spokesman John Kirby says the U.S. is in contact with the Bangladesh government and has offered its assistance to bring those responsible to justice.

He said all official American personnel are accounted for with no injuries reported, and the department is working with local authorities to determine if any U.S. citizens and locally-employed staff were affected.

The spree of recent attacks in Bangladesh have raised fears that religious extremists are gaining a foothold in the country, despite its traditions of secularism and tolerance.

About two dozen atheist writers, publishers, members of religious minorities, social activists and foreign aid workers have been slain since 2013. On Friday, a Hindu temple worker was hacked to death by at least three assailants in southwest Bangladesh. ISIS and and Al Qaeda affiliates have claimed responsibility for many of the attacks.

Hasina’s government has cracked down on domestic radical Islamists. It has accused local terrorists and opposition political parties — especially the main opposition Bangladesh Nationalist Party and its Islamist ally Jamaat-e-Islami — of orchestrating the violence in order to destabilize the nation, which both parties deny.

Simon
Next Story → Geuss Who is the most followed person in the Twitter-sphere?
Advertisement