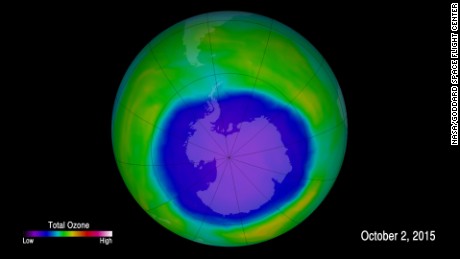 (CNN)The Antarctic ozone layer, which shields the Earth from harmful ultraviolet rays, shows encouraging signs that it’s beginning to heal, according to research published in the journal Science.

Scientists credit the healing to an international policy set nearly three decades ago that cut the production of ozone-destroying chemicals. That agreement — the 1987 Montreal Protocol on Substances that Deplete the Ozone Layer — called for the phase-out of substances including chlorofluorocarbons and halons, once present in refrigerators, aerosol cans and dry cleaning chemicals.
“The ozone layer is expected to recover in response, albeit very slowly,” wrote the researchers in the study which was released Thursday.
“We can now be confident that the things we’ve done have put the planet on a path to heal,” said Professor Susan Solomon of the Massachusetts Institute of Technology, who led the international team of researchers, in a statement. “We decided collectively, as a world, ‘Let’s get rid of these molecules’. We got rid of them, and now we’re seeing the planet respond.”
The ozone layer, a fragile shield of gas, protects animal and plant life on Earth from powerful UV rays. When the ozone layer is weakened, more UV rays can get through and affect humans, making them prone toskin cancer, cataracts and other diseases. There also may be consequences for plant life, including lower crop yields and disruptions in the ocean’s food chain.
The ozone hole was discovered in 1985, which led to the Montreal Protocol two years later.
Researchers from MIT, the National Center for Atmospheric Research and the University of Leeds in the United Kingdom, measured the impact on the ozone layer using weather balloons based in Syowa station (in Antartica) and South Pole stations, as well as ground-based instruments and satellites.
They estimated that the ozone-depleting gases peaked in the late 1990s and has since been slowly declining.
Scientists found that the hole in the ozone layer had shrunk by 1.5 million square miles, based on their measurements every September since 2000 to 2015. This area is equivalent to 4 million square kilometers, which is bigger than India.
Since the Montreal Protocol went into effect, the amount of harmful chemicals has also decreased. The chemicals in the atmosphere have long staying power, so researchers don’t expect the hole to seal up until about 2050.
They observed a record ozone hole in October 2015, but later determined that it was the effects from a Chilean volcano eruption six months prior. Volcanic eruptions can inject particles into the atmosphere that also deplete the ozone.
Related ItemshealthOzone layer shows signs of healing - CNN.com