Anthony Bourdain: I put aside my psychotic rage, after many years being awful to cooks

The chef and author on encountering vichyssoise aged nine, practical jokes with his sous chef, and learning to take food less seriously 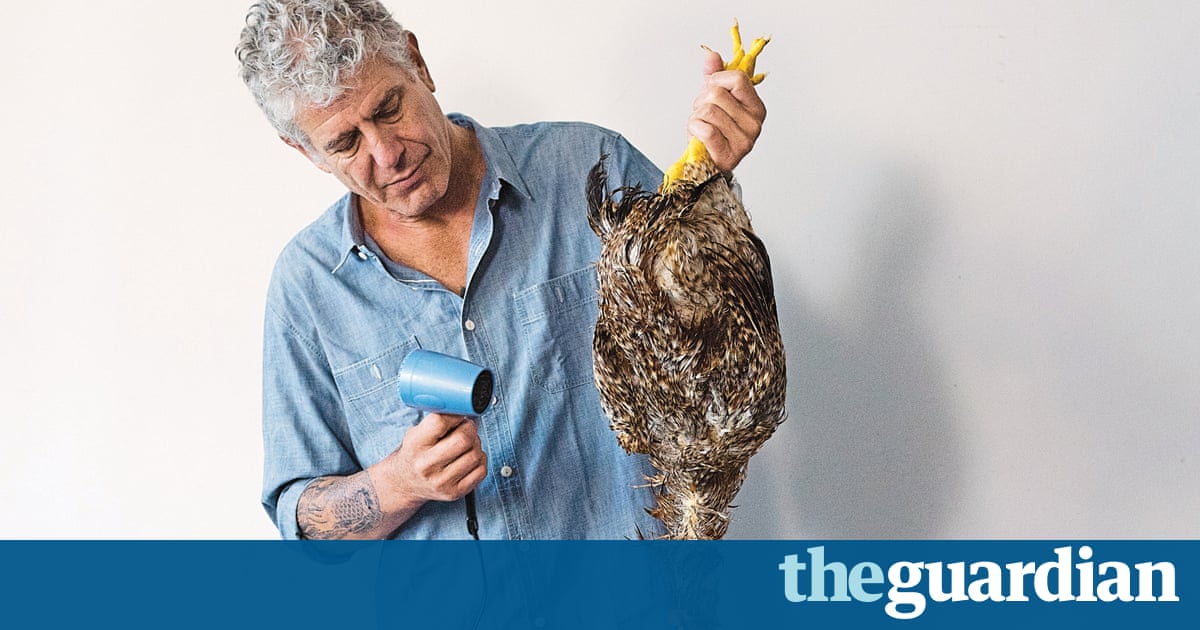 I worked in a restaurant where the house speciality was mutton chops, soeverything reeked of fat, penetrating every pore, follicle and piece of clothing, as if Id been rolling around in sheep guts. It was the first thing I smelled in the morning and the last at night. But I didnt have any friends outside the business. Its one of the reasons chefs hang with each other who else will love our smells?

As a youngster, in New Jersey, I was fed normal pedestrian American home cooking meatloaf and hamburgers although I do recall a copy of Julia Childs Mastering the Art of French Cooking high up on the refrigerator and how on special nights, when guests visited and mysterious adult stuff went on downstairs, the powerful smell of scallops with mushrooms in white wine sauce (Coquilles St Jacques) drifted upstairs.

At the age of nine, I went on the Queen Mary being served vichyssoise, a word I loved for my first trip to France, where boys were allowed watered-down wine and cigarettes on Sundays. But our parents left me and my little brother in the car outside La Pyramide (in Vienne), while they dined inside. I reacted by requesting oysters and dishes they found repulsive and becoming increasingly adventurous in my tastes. It wasnt about the food but about getting a reaction.

I only became happy in fact, intensely satisfied as a dishwasher at a restaurant in Provincetown in Cape Cod, my first job. I was a shy, goofy, awkward teenager. But in this blue collar, factory-like environment, there was no blurred line, no grey area, no philosophical question to fret over. Dishes had to go in the washer and come out taintless and doing this swiftly and competently meant I was acknowledged as a human being by colleagues I wanted to be like. The day they promoted me to dunking fries I was overjoyed.

It was watching chef Bobby screwing a bride over a barrel in the garbage area, while her wedding party dined inside, that made me want to be a chef. But it was awkward and didnt make sense. It was the first time Id seen anyone having sex and I didnt understand the brides motivation. Although I understand it very well now.

The line cook I especially respected was Beth Aretsky, aka The Grill Bitch; a very sturdy, hard, capable, profane woman at a time when there werent many women in the kitchen. When a Moroccan chef felt her ass she grabbed and spun him, then dry-humped him brutally over a cutting board. Like many early women in the business she was twice as tough as the men. Despite how she bossed us, wed go to her often crying for advice and support when having trouble with girlfriends. She wasnt having any of that either.

The crew at Marios restaurant spoke in this fantastic polyglot language incorporating Portuguese fishing dialect, Elizabethan poetry and Marine Corp profanities. And it was with Marios Dmitri such an influence on my career that I formed Moonlight Menus and created elaborate banquets for pizza magnates and drug dealers. When Dmitri designed tableaus on the sides of hams he did so with a dry, fantastic, acidic and self-punishing wit. He made fun of his propensity towards failure and disappointment, often, but he was a very creative, skilled and bright guy, who was different than anybody else Id met and very inspiring. Some of it was impressive for its time. I mean, no one else was doing pt en croute and huge galantines in aspic, elaborate chaud-froid presentations and Marie-Antoine Carme and Auguste Escoffier-era set pieces in 1975. Nobody. (Although if Daniel Boulud, whos since done these things, saw the quality I dont think he would be dazzled or impressed by our technique, to put it kindly.)

The mafia were everywhere back then. But now you have to look for them. The Racketeering & Corrupt Organisation Act which meant any member of an organisation could be prosecuted for the same crime as the leader of that organisation restricted the crime families involvement in the fish and meat markets. And were reaching the shallow end of the gene pool in a lot of these families the sons are all cokeheads and dont have the same values as their dads. The restaurant world aint what it used to be.

Im proud that in the last few years as a professional chef, however upset I was with staff, wed still be able to have a beer together at the end of the night, without ill-will. Id put aside my psychotic rage, after many years being awful to line cooks, abusive to waiters, bullying to dishwashers. Its terrible and counter-productive to make people feel idiots for working hard for you. Nowadays I still have a rather withering ability to be sarcastic and displeased but Im not screaming at anyone.

I was an unhappy soul, with a huge heroin and then crack problem. I hurt, disappointed and offended many, many, many people and I regret a lot. Its a shame I have to live with.

I like to hear music while I cook, but nothing too headbangy any more. Curtis Mayfield, Marvin Gaye, pre-disco funk, Isaac Hayes and Brothers Johnson and Im happy.

If I examine my body now, nude in the mirror, theres not too much damage to be seen. The burns, flesh marks and knife scars prevalent 14 years ago, before I moved into TV, have mostly faded. The damage sustained from handling lobsters and shrimp the inflammations and skin rashes have improved with time. My hands are pretty soft. My right hand is mangled with arthritis, from holding a whisk improperly for so many years, causing calluses to push bones out of joint. But Im in much better shape than Ive probably ever been. I travel 250 days a year. Im lean, my alcohol bloat has gone and I do Brazilian jiu-jitsu every day.

As I get older my tastes become simpler. The foods that make me reliably happy, that have a real emotional appeal, are a simple bowl of regional pasta, spicy noodles sold in Vietnam, or anybodys grandmothers meatloaf.

Its a lethal error to always critically evaluate meals. Ive certainly learnt to take food less seriously and try whenever possible to experience it emotionally rather than as a professional or critic. I like nothing more than seeing my daughter Ariane eating and liking food.

When youve seen what Ive seen on a regular basis it changes your world view. Ive spent such a lot of time in the developing world, I was caught in a war in Beirut, been in Liberia, the Congo, Iraq and Libya and realised how fast things can get bad, how arbitrary good fortune and cruelty and death. I suppose Ive learnt humility. Or something.

The great Warren Zevon was asked, close to death, whether he had any important words of wisdom to pass on and he said, Enjoy every sandwich. I definitely enjoy my sandwiches, given how low I fell and how likely it was that there was going to be a different and tragic outcome. Im a pretty lucky man. I enjoy my food and presenting Parts Unknown. I have the best job in the world.

This article was taken from Observer Food Monthly on 15th January 2017. Click here to get the Observer for half price.