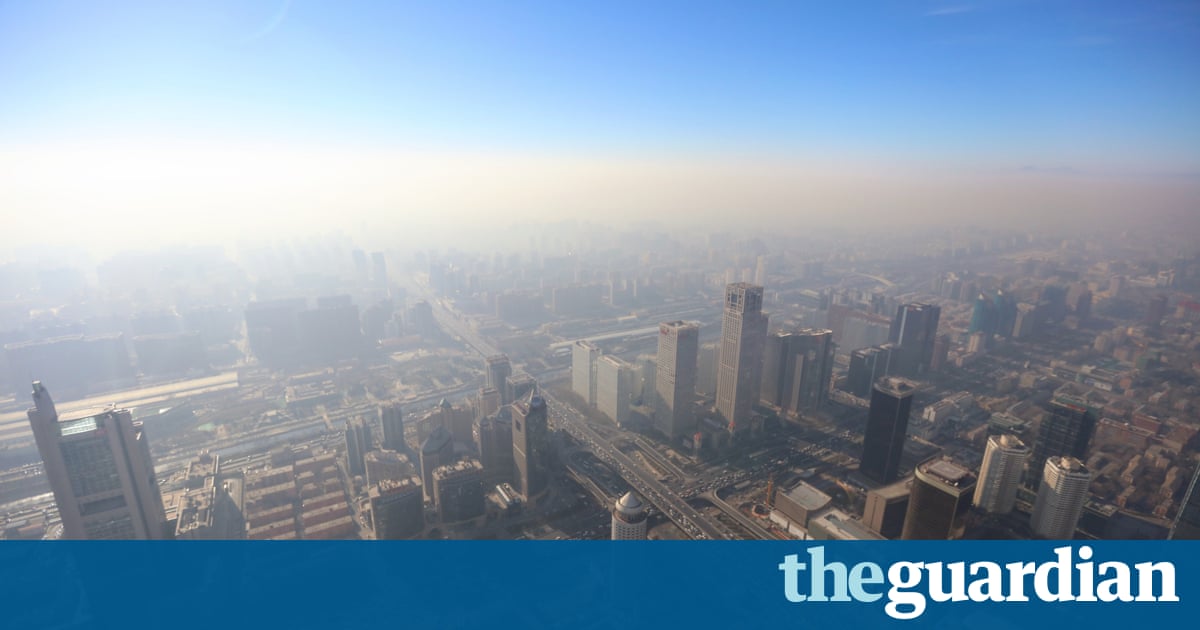 Beijing authorities have declared a five-day pollution red alert, shutting schools, ordering thousands of vehicles off the roads and telling residents to stay indoors, after the Chinese capital was enveloped by a shroud of toxic smog that is expected to linger until Wednesday.

The warning the first since Beijings inaugural red alert in December last year was officially implemented at 4.20pm on Friday as a nicotine-tinged haze rolled into the city.

Smog invades Beijing, tweeted Xinhua, Chinas official news agency, alongside a timelapse video capturing the arrival of what city officials have controversially decided to classify as a meteorological disaster.

A second Xinhua tweet showed the skies blackening over the course of Friday as toxic air swept into the northern city of 21 million citizens.

Chinas ministry of environmental protection reported that 21 other cities across north and central China had also declared pollution red alerts, including Tianjin, Shijiazhuang, Taiyuan and Zhengzhou.

A red alert is the highest level of a four-tier warning system introduced as part of Chinas high-profile war on pollution.

Xinhua said nurseries and primary schools across Beijing had been told to close until Wednesday when the smog is expected to lift.

Road works were suspended; older and dirty high-emissions vehicles were forbidden from taking to the roads; and heavily polluting industries such as steel plants were ordered to halt or slow their operations.

City officials were also reported to have penalised 388 people for igniting outdoor barbecues and fires.

But Dong Liansai, a Beijing-based climate and energy campaigner for environmental group Greenpeace, said coal-fired power stations, not barbecues, were to blame for the unusually severe bout of pollution.

Coal is the No 1 source, said Dong, warning that the smog contained tiny airborne particulates known as PM2.5 which were linked to numerous adverse health effects including lung cancer, asthma and heart disease.

Dong said the declaration of the red alert was a positive step that would help temporarily reduce emissions and pollution levels.

But this is only a short-term measure. If you want to solve the problem of air pollution then you really need to have a long-term policy, the campaigner added. And given that coal is the No 1 source we really recommend a nationwide cap on coal consumption that would help accelerate the transition away from coal.

Dong said the smog was a reminder, after a period of improvement over the last few years, that there is still a lot to do in the future.

Speaking to the New York Times this week, Beijing-based environmentalist Ma Jun said China had made huge progress in tracking the sources of air pollution over the past decade and had also become much more transparent in releasing information about the blight.

However, the risk to human health remained severe, with studies suggesting air pollution was causing between 300,000 and 1 million premature deaths a year.

There isnt much research on the relation between air pollution and lung cancer in China, and even less with accessible research results, Ma said. Its sensitive. The government does not want to cause panic among the public.

Dong, the Greenpeace campaigner, urged residents of areas affected by the latest red alert to limit their exposure to the smog by staying indoors with air purifiers turned on if possible. Try to minimise your outdoor activities and, if you really need to go out, wear a proper mask to protect yourself, he said.

Simon
← Previous Story Sydney helicopter crash: four people including three-year-old emerge unscathed
Next Story → What we know about Russia’s interference in the US election