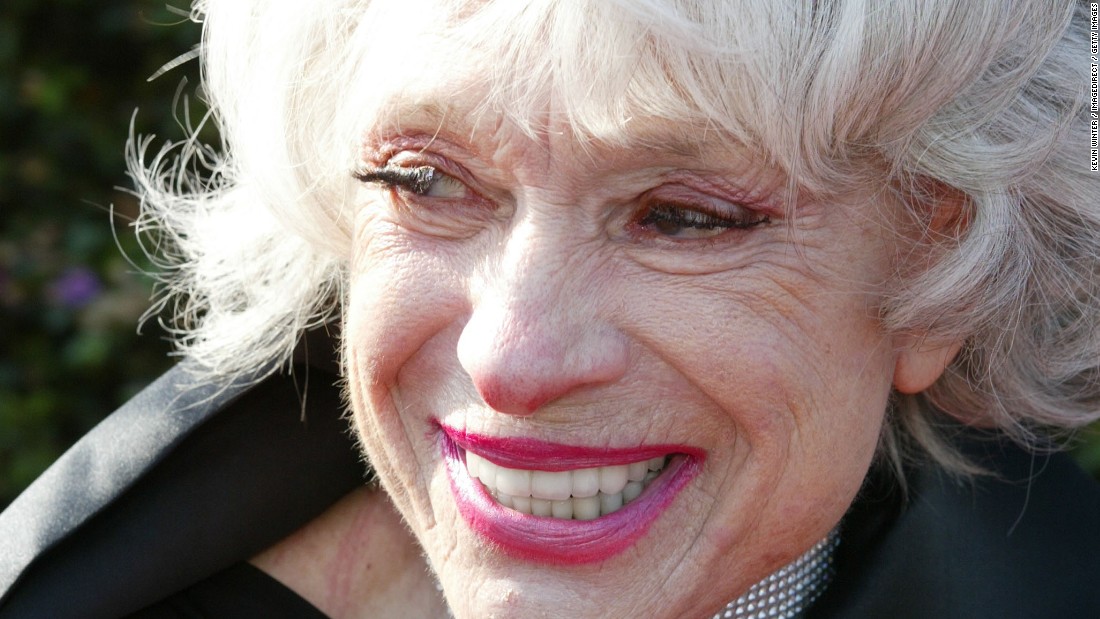 (CNN)Here’s a look at the life of award winning actress and singer Carol Channing. Her most famous stage roles are Lorelei Lee in “Gentlemen Prefer Blondes” and Dolly Gallagher Levi in “Hello, Dolly!”

Personal:
Birth date: January 31, 1921
Birth place: Seattle, Washington
Birth name: Carol Elaine Channing
Father: George Channing, a newspaper editor
Mother: Adelaide (Glaser) Channing
Marriages: Harry Kullijian (2003-2011, his death); Charles Franklin Lowe (1956-1999, his death); Alexander Carson (1949-1956, divorced); Theodore Naidish (1942-1944, divorced)
Children: with Alexander Carson, adopted by Charles Lowe: Channing Lowe, 1953
Education: Attended Bennington College, 1938-1941
Other Facts:
Is known for her wide eyes, platinum blonde wigs and speaking with a lisp.
Nominated for four Tony Awards; won one time and was also presented with two special Tony Awards.
Performed the role of Dolly Levi more than 5,000 times, missing only one performance due to food poisoning.
In her 1998 divorce complaint, she claimed that she and husband Charles Lowe had only had sex once or twice in 41 years of marriage. The divorce was not yet final when Lowe died in 1999.
Considers her inclusion on Nixon’s “Hate List” to be one of her highest honors.
Recovered from uterine cancer diagnosed in the late 1960s.
Timeline:
1941-1946 – Understudy for Eve Arden in “Let’s Face It.”
1948 – Broadway debut in the Marge and Gower Champion production of “Lend an Ear.”
1949 – Opens as the lead, Lorelei Lee, in “Gentlemen Prefer Blondes” on Broadway.
January 16, 1964 – “Hello, Dolly!” opens on Broadway.
May 24, 1964 – “Hello, Dolly!” wins ten Tony Awards including Best Actress in a Musical for Channing.
1968 – Receives a Special Tony Award.
1971 – Named Hasty Pudding Theatricals’ Woman of the Year by Harvard University.
1995 – Receives a Tony Award for Lifetime Achievement.
2002 – Receives the Actors Fund Julie Harris Award for Lifetime Achievement at the sixth annual Tony Awards.
2002 – Her book “Just Lucky I Guess: A Memoir of Sorts” is released.
2004 – Is awarded an honorary doctorate in entertainment arts by California State University.
2005 – Co-founds the Dr. Carol Channing & Harry Kullijian Foundation for the Arts (now the American Foundation for Arts Education), with Harry Kullijian.
October 2005 – Opens a new cabaret act in New York City, “The First Eighty Years Are the Hardest.”
September 13, 2007 – Channing’s luggage containing her rhinestone-studded costume from “Gentlemen Prefer Blondes” is stolen from the Hollywood Renaissance Hotel in Los Angeles. The dress is worth at least $150,000 and had been promised to the Smithsonian Institution; it is found the next day.
2009 – Releases an album entitled “For Heaven’s Sake.”
2012 – The film ”Carol Channing: Larger Than Life” is released.
January 20 2014 – As part of a year-long 50th anniversary celebration of “Hello Dolly,” Channing makes an appearance at Broadway’s historic Town Hall in New York.

Simon
← Previous Story Despite ‘Famous’ friendship, Trump team hasn’t asked Kanye to perform
Next Story → 10 Lifesaving Items You Should Never, Ever Remove From Your Car