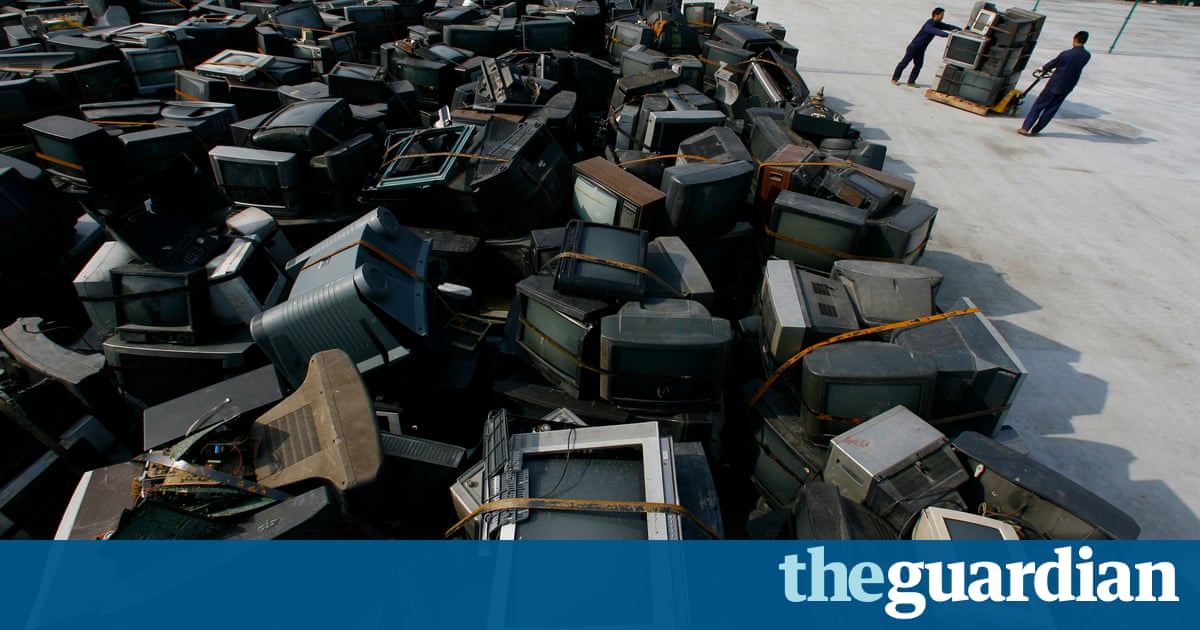 A record 16m tonnes of electronic trash, containing both toxic and valuable materials, were generated in a single year up 63% in five years, new analysis looking at 12 countries in east and south-east Asia shows.

In China the mountain of discarded TVs, phones, computers, monitors, e-toys and small appliances grew by 6.7m tonnes in 2015 alone. Thats an 107% increase in just five years. To get a sense of scale, if every woman, man and child in China had an old LCD monitor and dumped it the pile would not equal the 2015 tonnage. [1]

The regions fast-increasing middle class is the main driver of e-waste increases, not population growth, the report by the United Nations University found. However, Asias 3.7kg per person of waste is still tiny compared to Europes 15.6 kg per person, it said.

Growing incomes, the creation of more and more gadgets and ever-shorter lifespans of things like mobile phones are the reasons for this tremendous increase in Asia, said co-author Ruediger Kuehr of UN University.

Electronics and electrical devices have a big eco footprint, meaning their manufacture consumes a lot of energy and water, along with valuable and sometimes scarce resources, making recycling and recovery very important. The increasing volumes of e-waste combined with a lack of environmentally sound management is a cause for concern, says Kuehr.

We risk future production of these devices and very high costs without recycling the materials, he said.

Although plenty of e-waste is recycled in Asia its mainly done by backyard businesses who resort to hammers and burning to access re-usable metals, resulting in local pollution and health impacts. Mobile phones, TVs, monitors, printers and other electronics contain hazardous materials such as mercury and lead. Ink toner from printers is also considered toxic.

Much of Asias e-waste comes from Europe and North America despite restrictions on exports and imports by most countries, said Jim Puckett, coordinator of the NGO Basel Action Network (BAN).

The scale of e-waste exported to Asia has previously been difficult to estimate. BAN put GPS trackers inside old printers and monitors sent to recycling centres in the US last year to enable them to get a clearer picture. About 40% left the US with most ending up Asia. Nearly all of these exports were illegal under US law. Some of the trackers died so its likely 50% were exported, Puckett told the Guardian.

China, once a big importer of e-waste, has cracked down but Hong Kong has picked up the slack, with an estimated 100 containers of e-waste entering the port each day Puckett says. There are at least a 100 small e-waste junk yards in a semi-rural part of Hong Kong called the New Territories. Thats where we found most of the printers and monitors with our trackers.

A similar investigation to track where Europes e-waste is really going is now being planned by BAN.

Proper recycling of electronics is costly and expensive and is rarely done, even in the US. Manufacturers need to remove all toxins from their products and make them easier to repair and recycle, says Puckett. Another solution in Pucketts view is to adopt a lease-based business model where people lease rather than buy most electronics, and use upgrades or trade-ins to get the latest features.

Simon
← Previous Story Anthony Bourdain: I put aside my psychotic rage, after many years being awful to cooks
Next Story → Election looms for Northern Ireland amid Stormont deadlock