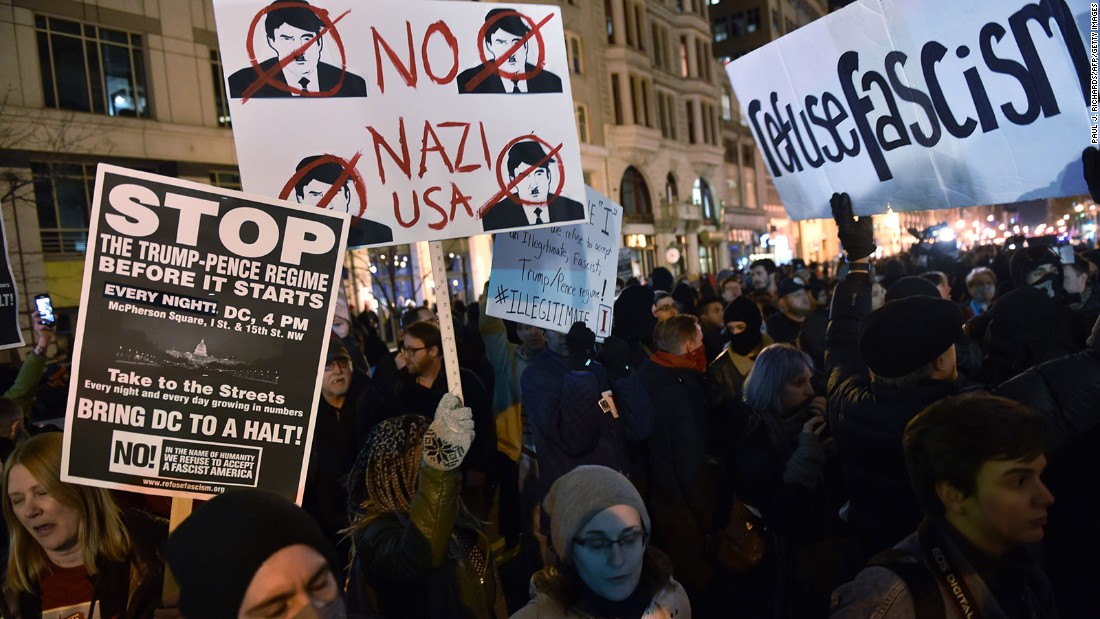 Protesters gathered on 14th Street outside the National Press Club to demonstrate against “DeploraBall,” an event organized by some of Trump’s most fervent supporters. The name riffs off the campaign description of some Trump backers by his defeated opponent, Hillary Clinton, as a “basket of deplorables.”
As attendees — some of whom were clad in suits and red hats, others dressed in gowns — entered the event, demonstrators chanted “Shame” and “Nazis go home” behind a phalanx of police. Some held signs that read “No Alt Reich” and “No Nazi USA.”
Other protesters chanted against the “alt-right,” “fascists” and “Nazi scum,” though it could not be immediately determined who was attending the event.
The chants were screamed when attendees entered or left the event, but died down when there was no one coming or going. Some demonstrators threw eggs at the National Press Club building and at revelers, though not at police. 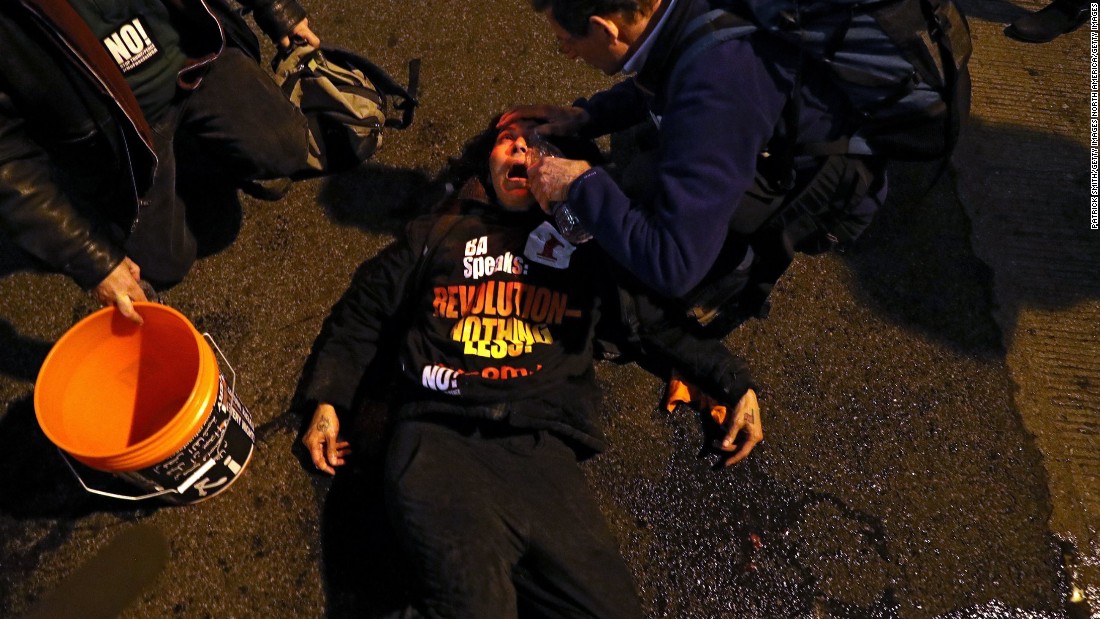 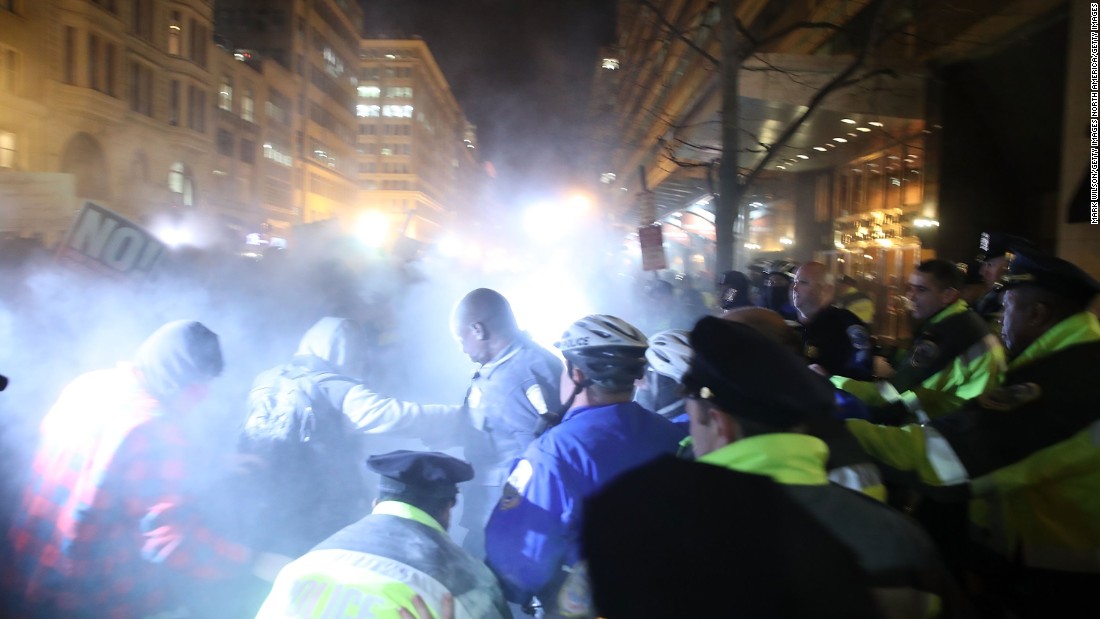 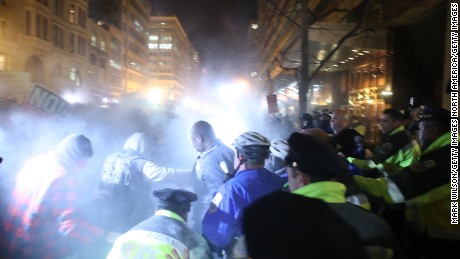 Less than a mile away, more festive activists gathered for the “Peace Ball” at the National Museum of African-American History and Culture.
Attendees in black tie apparel sipped drinks and enjoyed entertainment, including artist Solange, in a celebratory atmosphere.
The event was ostensibly nonpartisan, but many of those in attendance are also planning to go to Saturday’s women’s march, including actors Ashley Judd, Fran Drescher and Danny Glover.
Onstage, poet Sonia Sanchez encouraged attendees to “resist” the incoming administration in a speech on stage. The audience cheered.

Protests are expected across the nation’s capital on Friday, when Trump takes the oath of office, and Saturday’s Women’s March on Washington could attract a quarter million participants, potentially making it one of the larger political rallies the city has seen.
“We’re really trying to set a tone of resistance for the coming years,” Lacy MacAuley, a DisruptJ20 organizer, told CNN. “Donald Trump represents a shift in our politics in a dangerous, harmful, exclusionary direction. We oppose those policies of hate.”
Activists operating as part of the DisruptJ20 coalition will stage protests Friday at security checkpoints around the National Mall, where access is limited to inaugural ticket holders.An early delay could cause major delays and create a ripple effect of congestion across a crowded city that, according to Department of Homeland Security chief Jeh Johnson, could see as many as 900,000 spectators attend inaugural ceremonies.
Demonstrators also plan to create impromptu blockades along the heavily fortified inaugural parade route. Unlike the Women’s March on Saturday, which secured permits and will provide protesters with porta-potties and spaces to accommodate the disabled, DisruptJ20 is aiming to shut down key thoroughfares and gum up the inaugural glitz.

Protesters plan to step up in the Trump era

In addition to pop-up protests, like a Wednesday night pro-LGBT dance party in Vice president-elect Mike Pence’s new Washington neighborhood, DisruptJ20 has for the past week sponsored and conducted training in nonviolent protest. Their main website includes detailed guidance on protesters’ legal rights and a long slate of planned actions throughout Inauguration Day.
Sameera Khan, an activist from New Jersey, will march with the Occupy Inauguration group, which plans to merge with DisruptJ20 around noon, when Trump is slated to take the oath of office. A Bernie Sanders supporter during the Democratic primary, Kahn will speak at a forum on Friday afternoon that includes leading organizers from Black Lives Matter and the Standing Rock protests in North Dakota.
With Democrats out of power on Capitol Hill and looking unlikely to block any of Trump’s cabinet appointees, Khan and progressive allies are counting on the protest movement to pick up the slack.
“Civil disobedience and nonviolent action are probably the most important part of resistance to the Trump presidency, because if you look at Trump, he loves to be loved,” she told CNN. “He loves adoration and he loves to be applauded. So if he proposes a policy that we are not in favor of — that American people are not overwhelmingly in favor of — then we are going to be out in the streets.”
Johnson told reporters last week that 28,000 security personnel from dozens of agencies, including local and out of town police officers, will be fanned out across the city on Inauguration Day and into the weekend. DC Interim Police Chief Peter Newsham told CNN the city is prepared for a range of demonstrations.
“If they’re going to be nonviolent, they’re going to be peaceful, then we’re going to facilitate them with whatever they want to accomplish,” Newsham said.

The Women’s March gets ready for prime-time

The protests will be both politically and tactically diverse. Yasmina Mrabet, an organizer for the ANSWER Coalition, was critical of demonstrators who planned to assemble without permits, calling their actions a “diversion, not strategic.”
“It’s our perspective that we can make the strongest statement if all people of conscience gather at the same time and the same place and voice their dissent along the parade route,” Mrabet said. “That’s very important to us from a political perspective because we will be in the eye of the national and international media.”
The Women’s March on Washington, which begins near Capitol Hill at 10 a.m. ET on Saturday, will follow stricter guidelines, both on the streets and in their carefully crafted political message. In response to outside criticism and internal squabbling over its purpose, a group of 15 organizers drafted a “guiding vision and definition of principles” that details the march’s goals.
Organizers now say internal divisions, many of them stemming from a divisive Democratic primary fight, are being put aside in the name of solidarity.
“We have already proven that Hillary and Bernie Sanders supporters can work together against fascism, xenophobia, and racism,” Linda Sarsour, a Palestinian-American Muslim activist from Brooklyn, told CNN in an interview late Wednesday.
The Saturday protest, which began with a modest Facebook call in the aftermath of the election, has grown in to what could be one of the larger political demonstrations in DC. Sarsour believe forecasts for a warm and dry Saturday could boost turnout beyond the expected 250,000, with at least two dozen elected officials having confirmed their plans to take part.
*There are more than 600 “sister marches” now planned around the country and fundraising for the event has largely come in chunks of $20 and $30 online donations.
“It really reminds me of the Sanders campaign,” Sarsour said. “A very grassroots, very grass-powered movement.”