Dead or alive: Is the Philippines’ war on drugs out of control? 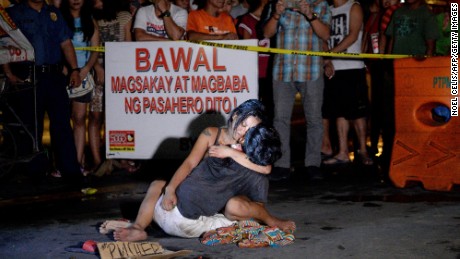 (CNN)New Filipino president Rodrigo Duterte campaigned hard on a no-nonsense approach to crime — and now the full impact of what exactly this means for those on the streets is emerging. 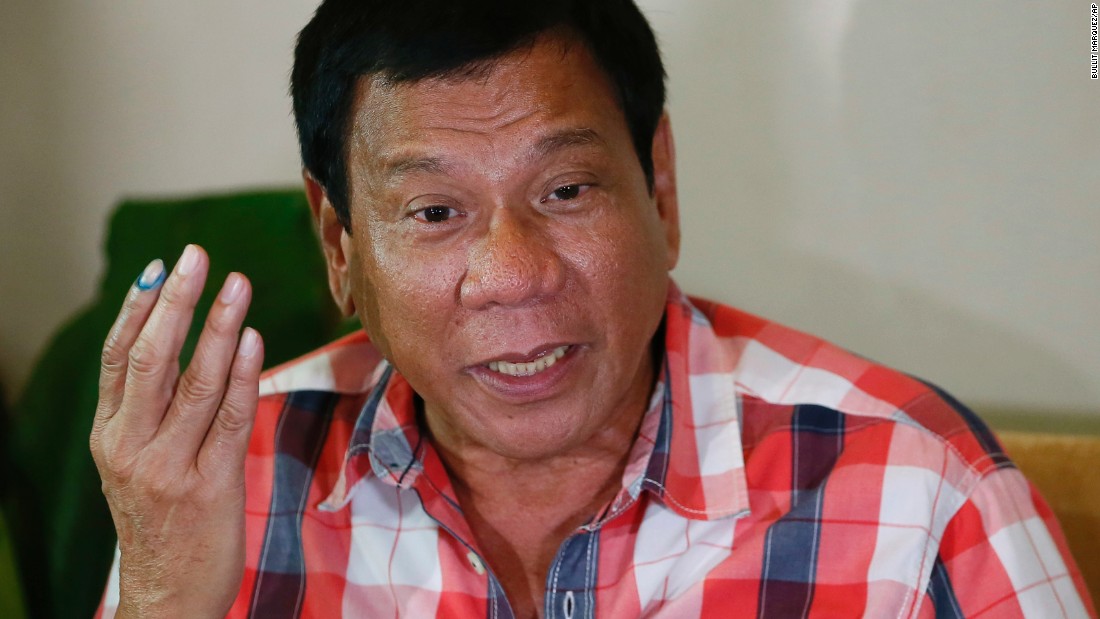 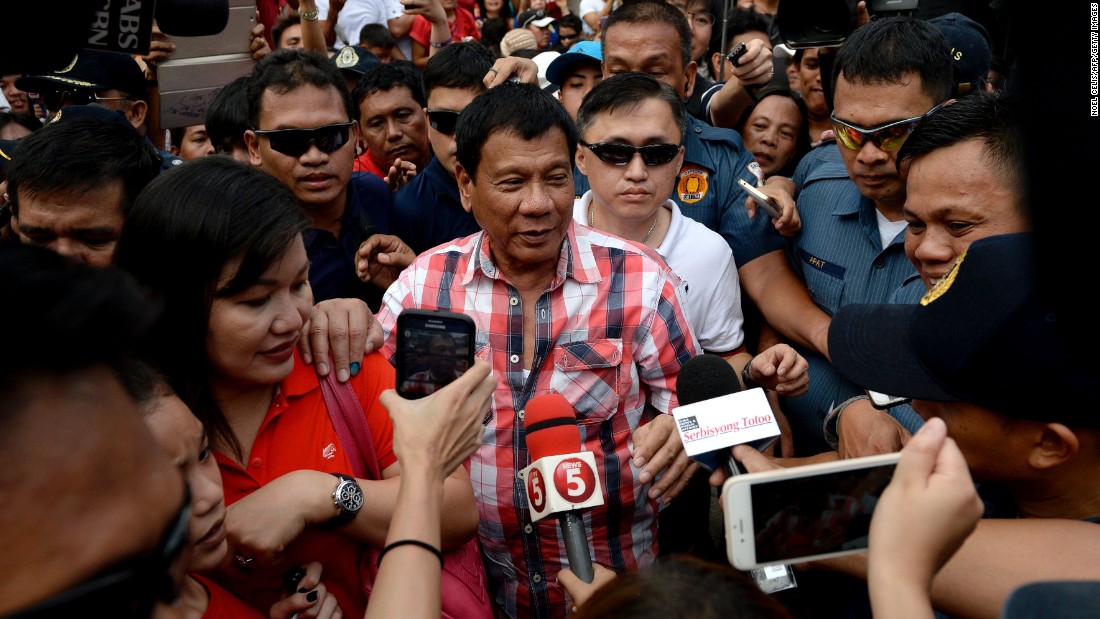 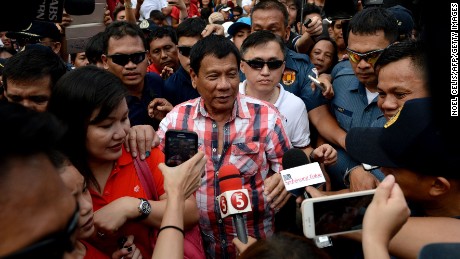 One image, in particular, has gone viral. It shows slain suspected drug pusher Michael Siaron, cradled where he lies on the street by his partner Jennilyn Olayres. A nearby, handwritten sign reads “pusher.” He was murdered by unidentified gunmen riding in tandem along the Pasay Rotunda in Manila on July 23rd, according to Raffy Lerma, the photographer who took the shot.
Olayres insists that he was just a pedicab driver and had no ties to the drug trade.
Advertisement 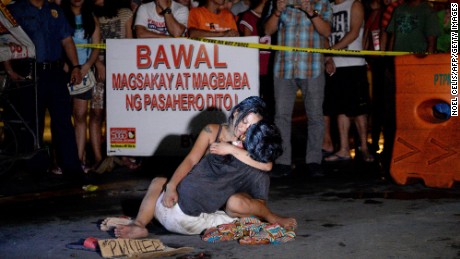 Advertisement
Duterte showed little sympathy for the grieving woman, or indeed the murdered man, in the photo. Responding to it after it had made its way to the front page of several Filipino newspapers last week, he instead used it as a warning.
“If you don’t want to die and get hurt, don’t pin your hopes on priests and human rights (groups). They can’t stop death,” Duterte, the straight-talking former mayor of Davao, a restive southern Philippines town, said last week, referring to the image.
“Then you end up sprawled on the ground and you are portrayed in a broadsheet like Mother Mary cradling the dead cadaver of Jesus Christ. Well, that’s very dramatic.”
He’s doubling down on the policy, despite criticisms that his apparent support for extrajudicial killings is leading the country down a dangerous, lawless path.
“Double your efforts. Triple them, if need be. We will not stop until the last drug lord, the last financier, and the last pusher have surrendered or put behind bars — or below the ground, if they so wish,” he said in his July 25 State of the Nation speech.
On Wednesday, he added in a speech that the reason he won by a “landslide” was the “sense of security” that he offers.
He said that the impact of drugs in the community made him “really angry. I’ve always been angry, even as mayor.”
Adding that “it’s a war, not a crisis,” he asked, “why should these people live?”
Despite the bullish tone, a government spokesman insists that the Duterte administration is against any form of extrajudicial killings.
“We do not condone these acts,” Presidential Communications Office (PCO) Secretary Martin Andanar said.
“(The) government is here to save our people from the drug menace and punish the offenders, including the big-time ones. The PNP (Philippines National Police) continues to investigate situations involving vigilante killings and operational aspects where deaths are reported.”
Philippines’ Duterte: I’ll bring back the death penalty

The ongoing use of this kind of language has drawn pointed criticism from human rights groups.
Cookie Diokno, Secretary General of the Free Legal Assistance Group, a nonprofit, told CNN that so far Duterte’s presidency has been “terrible, absolutely mind boggling.”
“We’ve never seen this kind of volume in recent years,” she said, adding that the last time the bodies were piling up to this degree was during the country’s dark period of martial law that began in September 1972.
“There are a number of signs that people are beginning to be afraid. We have clearance (documents) by National Bureau of Investigation, kids are walking around the street wearing (these signs) so they don’t get killed.
“Kids, maybe in their 20s, are walking around, saying, ‘hey, I could be mistaken for a pusher, please don’t kill me.’ People are getting more and more alarmed and this could convert itself into anger.”
Human Rights Watch (HRW) has called for the International Narcotics Control Board (INCB) and United Nations Office on Drugs and Crime (UNODC) to condemn the “alarming surge in killings of suspected drug users or dealers” in the country.
“International drug control agencies need to make clear to Philippines’ President Roderigo Duterte that the surge in killings of suspected drug dealers and users is not acceptable ‘crime control,’ but instead a government failure to protect people’s most fundamental human rights,” said Phelim Kine, deputy Asia director at Human Rights Watch in the report.
Duterte says killing of corrupt Philippines journalists justified

‘War on drugs’ out of control?

While it seems to be having an effect, with the government saying that tens of thousands of dealers and users have turned themselves in, the police’s heavy-handed approach continues, and could be having a spin-off effect.
Presidential spokesman Ernesto Abella said Wednesday that along with police killings of drug dealers, there was a possibility that vigilantes “fed up with the current justice system” or rival drug gangs might be taking advantage of his government’s war on drugs to take their own action.
He dismissed the idea that killers were being hired by the government to take out drug dealers.
“Why would we hire hitmen when we can hit them legally?” he asked.
Durterte insists that his war extends beyond street-level pushers, and that he is targeting both drug lords and also the corrupt officials within the country’s institutional framework that allows them to thrive.
On Tuesday, Albuera Mayor Rolando Espinosa Sr. surrendered after being accused of links to the illegal drug trade. “(PNP Chief) General Dela Rosa would kill me if I didn’t turn myself in”, he told media at a press conference, CNN Philippines reports.
Espinosa’s lawyer, Romeu Sterotoulas told CNN Philippines that his client has nothing to do with illegal drug operations in his town.
His son, who has a standing warrant of arrest in connection with the illegal drug trade, is still on the run, and Abella said that officers are authorized to shoot to kill, “If it endangers life and if they resist the arresting officer.”
Other officials, who have not been publicly named, have also been linked to drug trafficking, Abella said.
Duterte confirmed as Philippines President after vowing to sleep in

The tough talk is reaching down through the chain of command, and other officials have echoed Duterte’s language.
PNP Chief Ronald dela Rosa said that his force was targeting drug lords, and added that criticisms that the police only catches — or kills — street-level dealers “only increase(s) my urge to kill big time drug lords.”
When asked how Interior Secretary Ismael Sueno reacted when told about the death of alleged drug lord Meco Tan, he recalled the official said, “‘very good,'” characterizing the news as a “birthday gift” for the minister, CNN affiliate CNN Philippines reports.
Duterte: Public ‘can kill’ criminals
However, Dela Rosa has also said that official stance of the government is to oppose vigilantism.
“The PNP does not condone vigilantism. I, personally, will be vigilant against vigilantism,” he said during a July 11 press briefing.
But as the bodies keep piling up, and anger against the violence that is once again plaguing the Philippines’ cities continues to swell, few opponents to the wild west justice being meted out will find comfort in those words.
Related ItemsasiaDrug deaths in the Philippines: Is President Duterte's war on drugs out of control? - CNN.comkillingsphilippinespresident duterterodrigo duterte