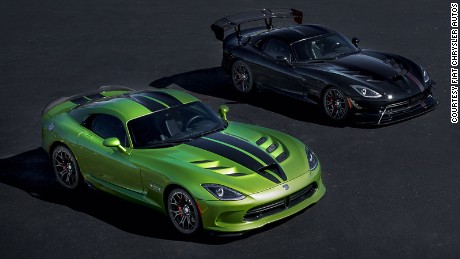 (CNN)There are relatively few icons in the world of modern cars — but when the Dodge Viper finally spits out its last bit of venom in 2017, it’ll be a sad day indeed for a hardcore group of enthusiasts who have long viewed it as a link to a different era.

Introduced in 1992, the Viper has not been a global sales phenomenon; Dodge has produced around 30,000 examples in total over 25 years but then, Ford makes that many F-150 trucks in a month.
READ: 10 incredible custom cars from the world’s most extreme gear heads
However, the devotion of Viper followers remains strong; a limited edition of 28 motorsport-influenced Vipers, one of a string of special versions designed to mark the Dodge’s 25th birthday, sold out recently in just 40 minutes.
According to a statement by Dodge, fans can expect one more special edition — the Dodge Viper Snakeskin ACR — and are building as many as 31 units to respond to customer requests. Orders for those are expected to open in mid-July.

Why the Viper turned heads

It’s easy to forget that the original Viper was not so much a reaction to customer demand but rather a gift from Dodge to itself. The company had flirted with bankruptcy in the late seventies, but had returned to profitability by building a line-up of pretty dull vehicles that nonetheless had mainstream appeal.
RELATED: The absurd beauty of Australian hot rods
The Viper was the antidote to this. Jaws dropped when a near-production-ready concept of the car was shown at the 1989 Detroit motor show, equipped with side exhausts, a cabin perched near the rear wheels and a bonnet that seemed to stretch into the next county.
RELATED: Land Rover Defender ends production
Early prototypes were powered by V8 engines but by the time the production version arrived in 1992, it had been fitted with a Lamborghini-tuned aluminium V10 producing a relatively heady 400bhp (brake horsepower).
This was but the starting point, though; the first generation of the Viper ended its life with a 450bhp version of the engine, and its successor – the Viper SRT-10, made its debut as a coupe and a convertible in 2003, with an even larger V10 engine producing 500bhp.
All the while, the Viper was a car that made no apologies for its brutish performance. Early cars had no anti-lock brakes to help you stop safely, and no traction control to help you tame the motor’s prodigious power mid-corner or in wet conditions. Drivers loved and feared it in equal measure.

Then in 2010, Dodge said it was killing the car off — only for Fiat Chrysler boss Sergio Marchionne to wheel out a prototype in front of dealers at that year’s annual conference.
Dodge showed the car to enthusiasts at an invitation event soon after, hoping to gauge reaction and use the people most likely to buy another generation of the car to help develop its specifications.
READ: Great Scott! The car that made time travel stylish is back
In 2012, two years after its apparent demise, the Viper returned – as a coupe only, and with an even more extreme V10 engine, stretched out to 8.4 litres in capacity and producing a thumping 640bhp. The top speed was now 208mph, making the Viper one of the most credible American rivals to Italian supercars.
Except it wasn’t really. Dodge enthusiasts quote ludicrous cornering ability, acceleration figures and track lap times — and there’s no reason to dispute them — but the Viper has never quite been able to shake off that slight whiff of muscle car.
READ: Land Rover: A car fit for the Queen
Deep down, that common slice of Americana may be the reason lots of owners have chosen it over a Porsche 911 or Audi R8. It has represented an era when Detroit still had the ability to raise a middle finger at environmentalists and accountants, to just build something not because it really made sense, but just because it was so damn cool.
And that is why, even as the final models roll down the line over the next 12 months or so, we should not discount the possibility that the Viper badge may not be dying at all, but just going into another period of hibernation. Stranger things have happened.
Related Itemsautosdodgedodge viperDodge Viper: American classic sells out in 40 minutes - CNN.comend productionfinal runlimited editionmuscle carsold outviper

Simon
← Previous Story Dad hilariously re-creates daughter’s sexy selfies
Next Story → You wont believe how this man gets around!