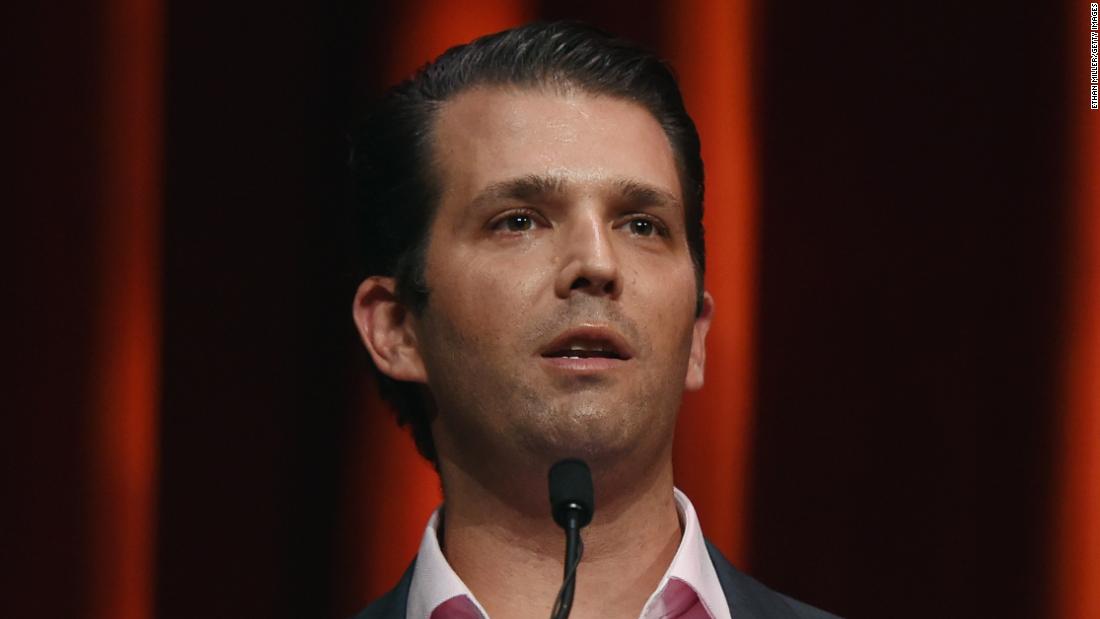 Dallas (CNN)Donald Trump Jr. made his first political public appearance since his father’s inauguration, taking an election victory lap and growing nostalgic for the campaign trail.

“I thought I was out of politics after election day,” Trump said Saturday, speaking at the Dallas County Republican Party’s Reagan Day Dinner, where he recalled his father’s unpredictable path to the presidency.
“I thought I’d be going back to my regular job. I thought I’d be really excited about it. But once you get a little bit of a taste of that action, it’s hard to leave. You know, listen, deals are still exciting, but when you’re sort of the guy out there 24/7, every day fighting in this thing it’s like a great fight, the intensity. I don’t miss the politics, I promise. I want nothing to do with the politics, but I miss the intensity of that,” he said, reminiscing about the no-sleep, fast-paced days of the campaign when he paraded around as one of the only surrogates.
He praised his father’s first 50 days in office: “What’s exciting for me, as an American, as a father of five young kids, is I’m watching more take place in two months than I saw in two terms before,” Trump said as nearly 1,000 Dallas County Republicans dined on lettuce wedges in a downtown hotel ballroom.
Trump used his remarks to thank Texas Republicans, who he said, “gave us the funds to go over and win all those other states.”
“We actually raised more money in Texas than we did in New York and California combined,” he noted.
Trump also lamented what he called a societal lack of diversity in thought, sharing some wisdom from his father with the Texas Republicans.
“We’ve done a really good job welcoming everyone, all sorts of diversity, but the only place where there’s a lack of diversity is a lack of diversity in thought — and that’s something we have to change, you have to be able to argue both sides of the coin … That’s something I learned a lot from my father. He’d sort of make you argue the opposite side, even if you didn’t necessarily believe it, just so you could put yourself in those shoes,” he said.
“This notion that that doesn’t exist anymore is very scary, cause what do those people in the real world when they for the first time face real adversity? What do they do if they’re not able to do that? If they’re not able to take some criticism, if they grew up in that participation medal, you know, era that so many of our kids do.”
Also speaking at the fundraising dinner: Donald Trump’s once-rival, Texas Sen. Ted Cruz, who joined the President and first lady for a private dinner in the White House residence Wednesday, along with wife, Heidi, and daughters Caroline and Catherine.
Trump’s eldest son thanked Cruz, saying he’d heard about the dinner through television reports.
“Now, I don’t even know that I have to deliver a punchline to that, but it’s sort of ironic. Who would’ve thought a year ago that Ted Cruz would be having dinner with my father and I basically have zero contact with him at this point?” he joked.
For his part, Cruz pressed his newfound feelings of “optimism” and ” encouragement” about the Trump administration, touting his willingness to “lead the fight” in Congress to enact the President’s agenda.
The former presidential candidate vowed to work as a bridge-builder in Congress on health care, calling the House bill to repeal the Affordable Care Act a “starting point,” but adding that he “emphatically [agrees]” with President Trump that the bill should be open for negotiation.
Everything changed on election night, Cruz said. “The time for talk is done. Now is the time for action.”
An invitation to the Saturday evening event advertised Trump Jr. as the main headliner Cruz has long been a key player in the Texas Republican dinner circuit. Tickets for the event ranged from $150 to host committee levels up to $25,000.
Trump, an avid outdoorsman who told attendees he enjoyed trips to Texas to hunt and fish, also has business ties to Dallas; Trump Hotels is in the process of building one of its new lower-cost concept hotels, Scion, downtown, according to the Dallas Business Journal.
Donald Trump Jr., 39, and brother, Eric, 33, assumed control of the Trump Organization as their father took office in January. Trump lawyer Sheri Dillon said at a January 11 news conference that Trump would not discuss the business with his sons. Their sister, Ivanka Trump, took a formal leave of absence from the real estate development company, moving to Washington, DC, with husband, Jared Kushner, who serves as senior adviser to the President.
Documentation published by ProPublica last month revealed the existence of a revocable trust — which was created “to hold assets for the exclusive benefit” of Trump — that is run by Donald Trump Jr. and Trump Organization executive Allen Weisselberg.
Eric Trump, while not listed on that trust document, appears on other business registration paperwork and retains a key executive role with the Trump Organization.
Following the inauguration, the oldest Trump brothers returned to the White House as the President nominated Neil Gorsuch to the Supreme Court. Eric was also in town last week, posting a photo with sister, Ivanka.
“Great seeing @IvankaTrump and the kids today! Miss her back in New York!” he wrote.