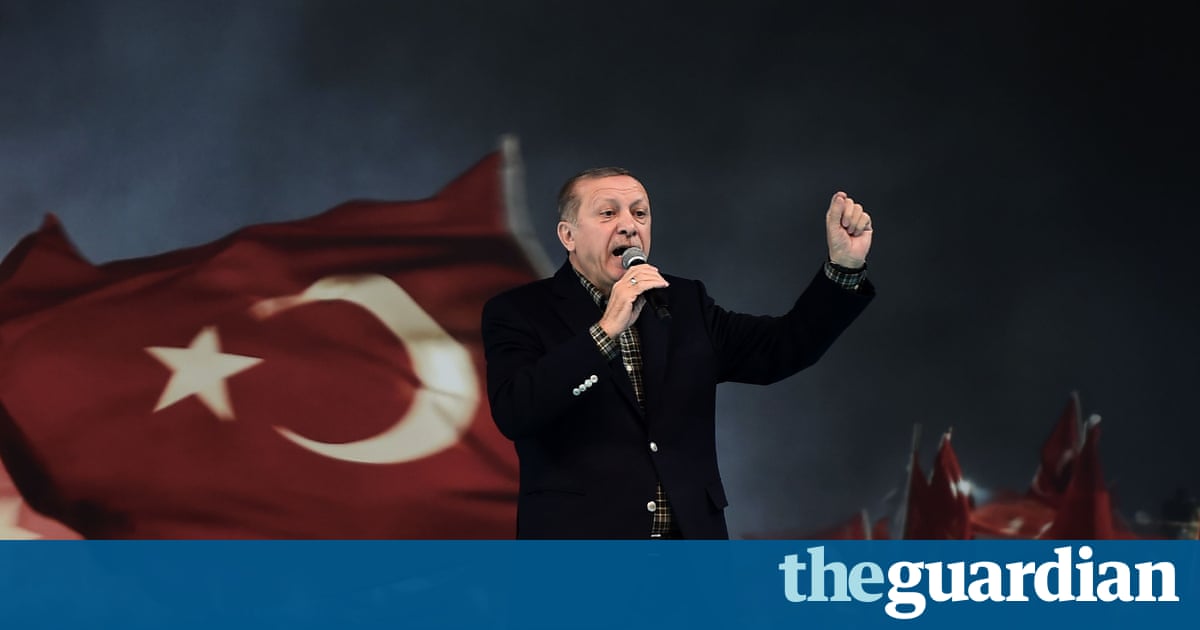 The Turkish president, Recep Tayyip Erdoan, has lashed out at Germany for blocking several rallies on its soil in the run-up to a referendum in Turkey, likening its stance to Nazi practices.

Your practices are not different from the Nazi practices of the past, he said of Germany at a womens rally in Istanbul before the referendum on changes to the constitution that would bolster his powers as president.

I thought its been a long time since Germany left [Nazi practices]. We are mistaken, he added.

Authorities in Cologne, in North-Rhine Westphalia, and Gaggenau, in Baden-Wrttemberg, cited security concerns for the cancellations. An appearance at a Cologne hotel by Turkeys minister for the economy, Nihat Zeybekci, was scheduled to go ahead with increased police security.

Last week Angela Merkel rejected calls for a general ban on Erdoan or his ministers campaigning in Germany, with her spokesperson arguing that it was important to respect freedom of speech.

The German government deplores the fact that freedom of speech and freedom of the press are currently limited in Turkey to an unacceptable degree, Steffen Seibert said. If we deplore this in another country, then we should be even more alert to make sure that freedom of speech is respected, within the framework of the law, in our own country. We should demonstrate what we demand from others.

The cancellations have infuriated the Turkish government, which accused Berlin of working against the yes campaign in next months referendum and summoned the German ambassador to the foreign ministry in protest.

You will lecture us about democracy and then you will not let this countrys ministers speak there, said Erdoan, adding that Germany was not respecting opinion and thought.

The Nazi comparison represents a major escalation of diplomatic relations between the two countries. Last summer a number of Turkish newspapers allied to the ruling AK party likened Merkel to Hitler after a German court banned Erdoan from addressing a crowd in Cologne via a live videolink.

Germany, which has never escaped its Nazi past, has let slip its mask, the Takvim newspaper wrote at the time. It has shown once again that it is no friend and ally. Another newspaper, Akam, ran a photomontage on its front page showing the German chancellor with a toothbrush moustache, along with the words Heil Hitler.

Similar photomontages have appeared in Greek and Polish newspapers in the past, but for a head of state to use the same rhetoric is almost without precedent. In 2013 Hungarys prime minister, Viktor Orbn, compared Merkels policy towards his country to 1944 Nazi occupation, stating in a radio interview that the Germans have already sent cavalry to Hungary they came in the form of tanks It didnt work out.

The German government press office said it would not be making a statement on Erdoans comments. But some German politicians criticised the Nazi comparison. The Green MP Volker Beck, who was arrested at a gay pride event in Istanbul in June 2016, tweeted: Now he [Erdoan] has lost it.

It is incredible and not acceptable for a president of a Nato member to comment in such a way about another member especially in a country which has considerable problems with the rule of law, said Volker Kauder, the parliamentary party group leader of Angela Merkels Christian Democratic party.

On Saturday Merkel called Turkeys prime minister, Binali Yldrm, to try to defuse the row. The two countries foreign ministers are scheduled to meet in Germany on Wednesday.

In an op-ed in Bild am Sonntag newspaper, Germanys foreign minister, Sigmar Gabriel, described the war of words as a difficult stress test and warned that the basis for friendship between our two countries must not be allowed to be destroyed.

Relations between Turkey and Germany lurched into crisis after the arrest last week of Deniz Ycel, a correspondent for Die Welt, pending a trial on charges of propaganda and incitement to hatred. Erdoan claimed the journalist was a German spy and a representative of the outlawed Kurdish rebel group PKK.

Erdoan accused Berlin of harbouring him for a month at the German consulate in Istanbul before agreeing to hand him over to authorities. They need to be put on trial for aiding and abetting terrorism, Erdoan said during a speech on Friday.

Turkish-German relations have been repeatedly put to the test since Merkel acted as one of the key architects of a refugee deal between Turkey and the European Union. Originally designed to put an end to chaotic people-smuggling practices on the Mediterranean, critics say it has allowed Erdoan to blackmail Merkels government by threatening to cancel the agreement.

Merkel was accused of kowtowing to the Turkish leader last April after acceding to a request from Ankara to prosecute a comedian, Jan Bhmermann, who had read out an offensive poem about Erdoan on his TV show. Charges against Bhmermann were later dropped.

During the current diplomatic crisis, the German chancellor is again being accused of acting too passively, and the weekly Der Spiegel called for an alternative to the Turkey deal. It is high time to free ourselves from Erdoans chains, an op-ed in its latest edition argued.

Simon
← Previous Story Trump golf resort and Scottish planners clash over the environment
Next Story → The Russian Revolution: then and now