In mid-October I wandered into a Trump field office in Youngstown, Ohio and met Coni Kessler, a kind 75-year-old Youngstown native with penciled-on eyebrows and a Women for Trump button on her Trump 2016 t-shirt. She sat me down in a chair just beside her, and for more than an hour, explained why she detested Hillary Clinton and was ecstatic to vote for Trump this year.

Clinton, she told me, is an atheist who wears an earpiece during debates so billionaire George Soros can feed her talking points. The day Clinton collapsed into the back of her van when she was sick with pneumonia? According to Kessler, the Clintons hired a young actress to run up and give Clinton a hug for a staged photo after the collapse. Kessler also said shed seen videos of Bill Clinton raping an underage girl but that the video had mysteriously disappeared. She wondered why no one was talking about Bill Clintons illegitimate, half-black son. And she said that whenever she talks negatively about Clinton online, they—presumably the technology overlords—shut her phone down.

At some point, I stopped Kessler to ask her where shed gotten all these stories, stories I knew were false Clinton conspiracy theories. Her answer: It was on my Facebook page.

Kessler’s stories were extreme, yes, but I should have known then that Trump enjoyed the support of enough people like Kessler, being fed an entirely different narrative about the two candidates, to help carry this election. But I missed it entirely. Because of her conviction that these stories were true, I considered Kessler part of a fringe that could not possibly gain the backing of enough voters to win. I missed this because, well, I was living in my own bubble, too.

Ill stop here to say that, no, this isnt another story about how Facebook gave us President-elect Trump. By now, there are plenty of solid stories like that, and theyre not wrong. To be sure, Facebook played an instrumental role in this election by allowing the kind of fake news stories Kessler described to me to proliferate and by giving all of us the option of only seeing the content we like. But it would be wrong to lay the election results entirely at Facebooks feet. Trump won in large part because he mastered this particular moment in social medias evolution in a way that no presidential candidate—not even Barack Obama, whose embrace of social media was historic in its own way—has ever done before.

We may not know exactly how rich our soon-to-be president actually is. But in an economy where clicks are currency, Trump is King Midas.

Nicco Mele was as clueless as anyone that Trump was going to win the election. This is strange, since Mele actually predicted just that in his 2012 book, The End of Big. Mele describes how the internet enabled insurgent political candidates like Barack Obama in 2008 to succeed by corroding traditional top-down political power structures. That corrosion is in many ways a good thing, he wrote, because the political class is corrupt and divisive. Yet in hastening the demise of parties and empowering upstarts, radical connectivity also paves the way for a dangerous populism to take hold of our political system, he says. We get exciting candidates like Barack Obama who can shake up the system, but also extremist or fringe candidates who if elected could bring the whole house down.

Like Barack Obama, Trump used social media as a direct line between himself and the American people. But unlike Obama in 08, Trump had spent years cultivating this community with his tirades about everything from President Obamas birthplace to Robert Pattinson and Kristen Stewarts relationship. By the time he ran for president, Trumps online following was already robust.

In an economy where clicks are currency, Trump is King Midas.

That mastery proved powerful. From last summer onward, Trump consistently dominated the conversation on both Facebook and Twitter. But his frequent online outbursts didnt just captivate voters. They captivated the media. He had an ability to communicate in an unfiltered fashion like no candidate before, says Patrick Ruffini, a leader of the #NeverTrump movement and co-founder of the polling group Echelon Insights. She was background noise in a way.

Clinton herself, on the other hand, always seemed to be a step removed from her online persona. On social media, her large digital team crafted messages that referred to Clinton in the third person. These expertly manicured status updates included tastefully designed graphics. But they sometimes didn’t seem to include the candidate herself, at least not in a way that felt like you were in direct contact with a real person. As we wrote during the primaries, the tone of Clinton’s emails, which she didn’t intend to be viewed by the public, gave a better sense of who she is as a person than her social media posts ever did. They felt like the authentic Clinton.

For better or worse, Trumps online persona has always been raw. He seemed like a guy who was actually upset at 3 in the morning, Cenk Uygur, host of the left-leaning web series The Young Turks, says of Trumps infamous sex tape tweet. We were all on the edge of our seats for the next Trump tweet. The American people like to be entertained. Yes, it is a show. Yes, it is a popularity contest. Literally.

The mistake much of the media made, Uygur says, was believing that Trump was undoing his candidacy with every 140-character missive. They made the same mistake in believing that Senator Bernie Sanders was too unruffled and unpolished to ever become president. That was not the bug. That was the feature, he says. Its all about authenticity.

High on Outrage, Low on Substance

Its not just that Trump seemed authentic online. Its also that he seemed angry. While Clinton preached optimism, Trump preached despair. According to Jonah Berger, author of Contagious: Why Things Catch On, anger, anxiety, and other so-called high arousal emotions are among the most important ingredients to virality online.

In a 2011 paper, Berger tracked how people shared every New York Times article over a three-month period. He found that emotions like awe, anger, and anxiety went viral far more readily than sadness and contentment. 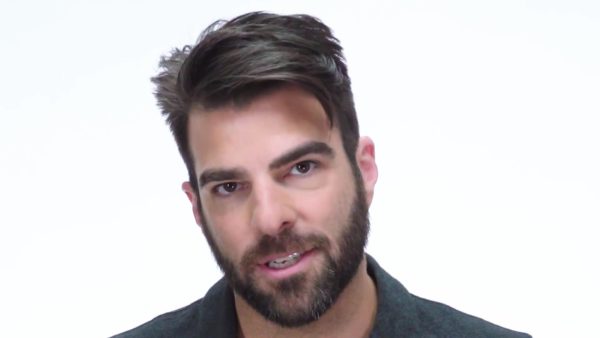 Zachary Quinto Explains How To Hack An Election

Whether this was his strategy or they lucked into it, I dont know, Berger says. But theyve been playing on these emotions.

We also know that people often share viral content without even reading what theyre sharing. In 2011, web traffic outfit Chartbeat published a study that showed a huge percentage of people who clicked on an article on Slate never even scrolled down the page. A vast majority only ever made it halfway.

Theyre reading the headlines, getting an emotional reaction, and theyre passing them along, Berger says.

Its a trend that feels tailor-made for a candidate like Trump, whose campaign was high on emotion but low on detail. Clintons campaign, meanwhile, used fact-checking as its first line of defense. It seemed logical at the time. Online, most facts are findable, so why not use them? But it could be that all that work only served to heap more detail on an electorate that was scarcely making it through the headlines. Thats not a behavior limited to Trump supporters. Thats everyone.

As I said before, Trumps rise was not all Facebooks doing. But the social networking giant has had a massive impact. Between March 23, 2015, when Ted Cruz became the first presidential primary candidate, and November 1, 2016, 128 million people in the US generated 8.8 billion Facebook likes, posts, comments and shares related to the election. According to Pew Research, 44 percent of Americans get their news from the site.

That fact has not gone unnoticed by spurious purveyors of so-called news, who now use Facebooks massive scale to build an audience on the backs of stories that dont have to be factual, just sharable. In a study of partisan news sites, Buzzfeed found that certain right-wing Facebook pages published false or misleading information 38 percent of the time, while left-wing pages did so nearly 20 percent of the time.

Whatever is true is not necessarily viral and whatever is viral is not necessarily true, says Vincent Hendricks, director of the Center for Information and Bubble Studies at the University of Copenhagen. But Facebooks algorithms prize virality. Theyre trained to show people the kind of news theyre going to like, allowing so much of this fake news to go unchallenged.

Anger, anxiety, and other so-called ‘high arousal emotions’ are among the most important ingredients to virality online.

Facebook is aware of its fake news problem and is trying to solve it with technology. In News Feed we use various signals based on community feedback to determine which posts are likely to contain inaccurate information, and reduce their distribution, Adam Mosseri, vice president of Facebook said in a statement. In Trending we look at a variety of signals to help make sure the topics being shown are reflective of real-world events, and take additional steps to prevent false or misleading content from appearing.

But the echo chamber effect is tougher to overcome. Human beings have always sorted themselves into like-minded groups, and social media allows that sorting to happen with the speed of a few clicks. As writer Bill Bishop describes in his book The Big Sort, Americans are increasingly choosing to live in places where most people think, believe, and vote as they do. Which shouldn’t be so shocking, considering most of us choose friends because of what we have in common. In fact, some evidence even suggests that Facebook may expose us to more opposing viewpoints than we might otherwise see in the real world.

Still, it doesnt take much digging through the election exit polls to see the country is already deeply divided between red and blue states, cities and rural areas, ages and races. Naturally that division manifests itself online, too. If Trumps stunning upset teaches us anything, its that we were blind to what the other side was saying. The good news? For better or worse, the other side is only ever a click away. Donald Trump figured out early on how to take advantage of that digital closeness. To succeed, his opponents will have to figure out how to do the same.