Presidents of Mexico, Ecuador, South Africa and Zimbabwe, but not those of America, Canada or Britain, join Cubans to say goodbye to revolutionary 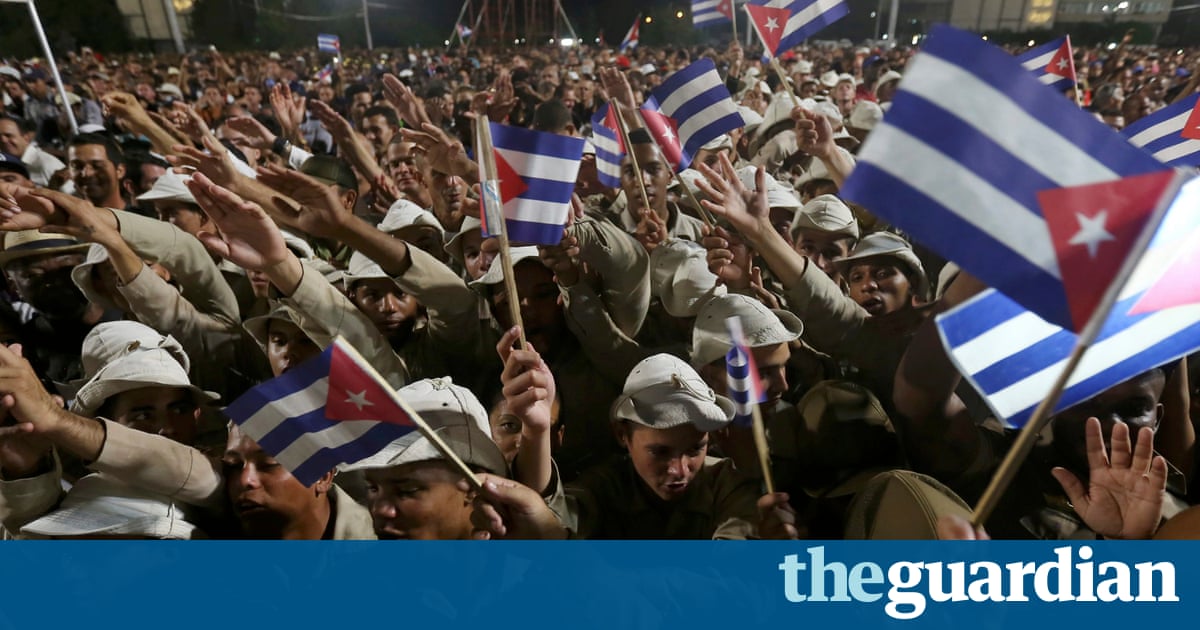 With sombre speeches and a thunder of cannon, Havana held a mass eulogy for Fidel Castro on Tuesday night in a ceremony that underscored the polarising influence of the dead Cuban revolutionary.

President Raul Castro, dressed in his military uniform, led the memorial for his brother, who seized power in 1959 and turned the Caribbean island into a bastion of anti-imperialism and a focus of Cold War tensions with the United States.

Ideological allies, including Venezuelas Nicholas Maduro, Bolivias Evo Morales, Zimbabwes Robert Mugabe and South Africas Jacob Zuma came in person to say farewell to Castro, who died on Friday aged 90, whilst nations on the other side of the political divide sent lower-ranking representatives.

Cuba is going through a moment of profound shock, Bolivian President Evo Morales said when he arrived. I came to be present during a moment of pain from the loss of my brother, my friend.

As well as tens of thousands of Cubans, the great and the good of the nations cultural and sporting world were also in attendance. Among them was Ana Fidelia Quirot, a two-time world 800m champion, who arrived in the colours of the national athletics team.

She recalled how Castro had visited her bedside every day while she was recovering from a life-threatening accident. In my toughest moments he was always there for me, she said. I have come to honour an exceptional humanist. He may not be here physically but he will stay in my heart.

A group of elderly veterans paused on their way to the square to share reminiscences and sentiments as chants of Viva Fidel! resounded.

Eighty-year-old Armando Vasquez fought for Castro in the Sierra Maestra in the early days of the revolution. He was like a father. When he gave an order you knew you could do it, because he had already showed that it could be done.

Another pulled out his wallet and showed the Castro photograph he keeps inside. Look at this. I dont keep a picture of my wife or daughter. Thats how much Fidel means to me, said Gilberto Gonzalez. We Cubans have been privileged to have a leader like this.

Sandra Calvo a Cuban-Mexican resident arrived with her sister Patricia, pushing her 11-month-old son who was holding a Cuba flag. Its the end of an era but something more than that, she said.

I am a graduate of political science and I cant think of any case where the loss of a former president has generated so much genuine sadness. People arent forced to come here. They want to respect him and his achievements. There arent many countries where people can become doctors and philosophers regardless of their economic position.

Raul Castro closed the rally with a speech thanking world leaders for their words of praise for his brother, who he called the leader of a revolution for the humble, and by the humble.

Earlier in the day, lines stretched for hours outside the Plaza of the Revolution, the heart of government power and the place where Castro delivered fiery speeches to mammoth crowds after he seized power.

In Havana and across the island people signed condolence books and an oath of loyalty to Castros sweeping May 2000 proclamation of the Cuban revolution as an unending battle for socialism, nationalism and an outsize role for the island on the world stage.

Tribute sites were set up in hundreds of places across the island as the government urged Cubans to reaffirm their belief in a socialist, single-party system that in recent years has struggled to maintain the fervour that was widespread at the triumph of the 1959 revolution.

Many mourners came on their own accord to Havana but thousands were sent in groups by the communist government, which still employs about 80% of the working people in Cuba despite the growth of the private sector under Raul.

Cuban state media reported that an urn containing Castros ashes was being kept in a room at the defence ministry where Raul Castro and top Communist party officials paid tribute the previous evening.

Inside the memorial thousands walked through three rooms with near-identical displays featuring the 1962 Alberto Korda photograph of the young Castro in the Sierra Maestra mountains, bouquets of white flowers and an array of Castros medals against a black backdrop, framed by honour guards of soldiers and children in school uniforms. The ashes of the 90-year-old former president did not appear to be on display.

Signs read: The Cuban Communist party is the only legitimate heir of the legacy and authority of the commander in chief of the Cuban Revolution, comrade Fidel Castro.

Goodbye commander. Your ideas remain here with us, 64-year-old retiree Etelbina Perez said between sobs, dabbing at her eyes with a brown handkerchief. I feel great pain over his death. I owe my entire life to him. He brought me out of the mountains. I was able to study thanks to him.

The White House announced on Tuesday that Obama would not send a presidential delegation. Instead, the United States will be represented by Jeffrey DeLaurentis, chief diplomat at the US embassy in Havana, and Ben Rhodes, an Obama aide who represented the United States in 18 months of secret talks that led to detente.

Mugabe, 92, himself a former Marxist guerrilla who has led Zimbabwe as prime minister or president since 1980 despite financial and health crises, praised Fidel Castros government for having trained thousands of Zimbabwean doctors and teachers.

Fidel was not just your leader. He was our leader and the leader of all revolutionaries. We followed him, listened to him and tried to emulate him, Mugabe told reporters as he arrived in Havana. Farewell, dear brother. Farewell, revolutionary, he said.

Associated Press and Agence France-Presse contributed to this report