The sixth season of the HBO series swept all before it at the 2016 Awards, becoming the most garlanded show in Emmys history in the process 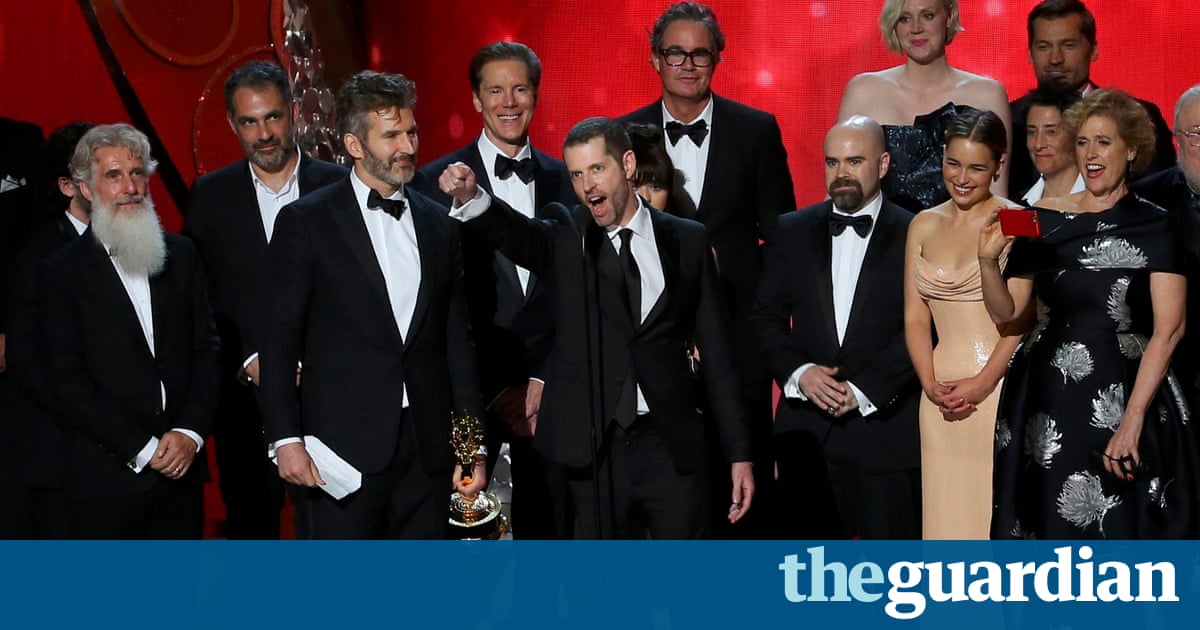 Winter might be coming for the residents of Westeros but for the creators of Game of Thrones and HBO it was clear skies again at the Emmys, where the series won the best drama series award for the second year in a row.

The HBO series was up for 24 awards and came away with 12 at Sunday nights Emmy awards in Los Angeles, breaking a record set by the sitcom Frasier with a total haul of 38 Emmys.

The Battle of the Bastards episode was singled out for praise and won awards for best drama writing (David Benihoff and DB Weiss) and directing (Miguel Sapotchnik).

Veep, which has been nominated 42 times at the Emmys, won the best comedy category.

It was also a great night for The People v OJ Simpson, Ryan Murphys dramatisation of the OJ Simpson trial. The show picked up 22 nominations and won the outstanding limited series gong, while actors Sterling K Brown, Sarah Paulson and Courtney B Vance all picked up individual honors for their performances as Christopher Darden, Marcia Clark and Johnnie Cochran, respectively.

Rami Malek took home a surprise win for lead actor in a drama, for his performance as Elliot Alderson, a paranoid, socially awkward hacker in Mr Robot, while Tatiana Maslany won in the best actress category for Orphan Black.

The issue of diversity was constantly raised on the night with Jimmy Kimmel starting the evening by joking about Hollywoods propensity for saying how much it cares about diversity without necessarily doing anything about it. One moment that wasnt so funny was when Aziz Ansari was cut off before being able to give his speech after winning outstanding writing in a comedy series for Master of None.

That was a little weird earlier, I just wanted to thank my parents who inspired the episode and acted in the show too, he said, when he appeared later to give the award for best writing for a variety special. The band was also criticised for playing off a producer of The People v OJ Simpson, who was making an emotional dedication to her wife.

Former Republican presidential candidate Jeb Bush appeared in a bizarre opening segment, playing a chauffeur for Julia Louis-Dreyfus. If you run a positive campaign the voters will ultimately make the right choice, he said in a self-effacing scene that poked fun at his disastrous campaign.

Kimmels own performance was at times controversial, especially a joke he made about Johnnie Cochran being somewhere looking up at us after Courtney B Vances win for his portrayal of him on The People v OJ Simpson.

The Emmy voters habit of picking the same winners continued with Jeffrey Tambor and Julia Louis-Dreyfus picking up lead actor and actress in a comedy. Louis-Dreyfus has won the award five years in a row for Veep, while Tambor picked up the award after winning last year for his performance in Transparent.

Tambor also led a tribute to Garry Shandling, who died in March and who he worked with on the Larry Sanders show. There was another tribute for Garry Marshall from Henry Winkler, who called him one of the most beloved men in the history of our business.

It was a good night for British talent with John Oliver winning for best variety talk, and Sherlock (best made for TV movie) and The Night Manager (best directing) also winning on the night.

Regina King won best supporting actress in a limited series or movie for the second year in a row for her performance in American Crime. Key & Peele won in the variety sketch category for their Comedy Central series, which ended after its fifth season. Ben Mendelsohn managed to cause an upset in the best supporting actor in a drama category by beating Game of Thrones stars Kit Harrington and Peter Dinklage.

Simon
← Previous Story ‘America’s Got Talent’ winner Grace VanderWaal gets a sweet surprise from Taylor Swift
Next Story → Giving Back: Eddie Murphy Is Donating His Nutty Professor Fat Suits To Burn Victims To Give Them A Second Chance At Life