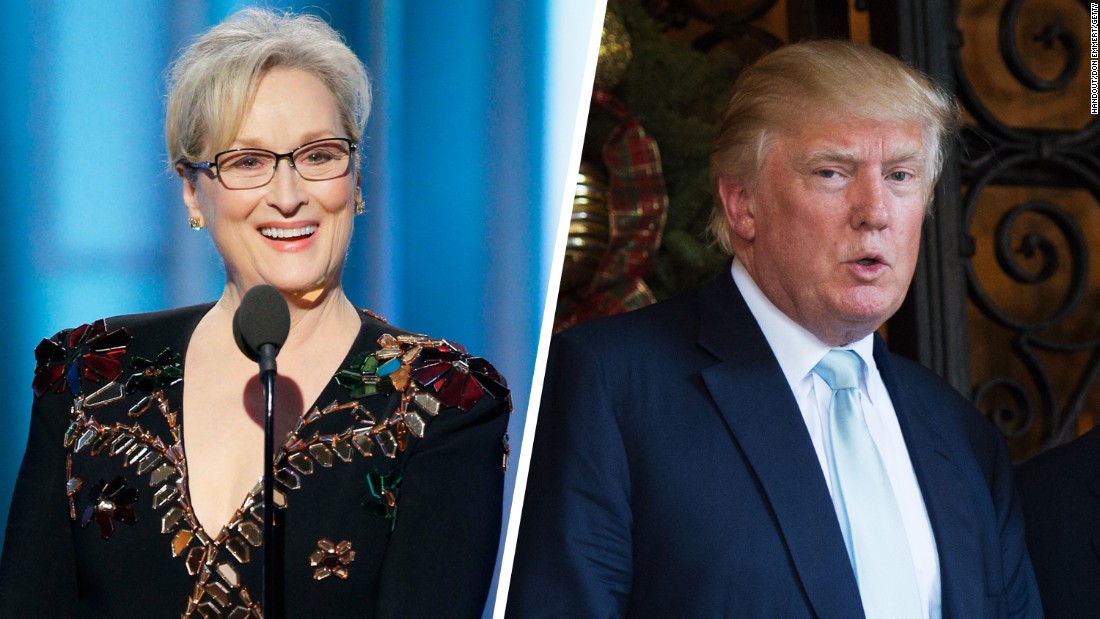 (CNN)As the first major awards show since Donald Trump’s election, the Golden Globes offered a record-setting embrace of the musical “La La Land,” but also a snapshot of the hostile atmosphere between the President-elect and the arts/entertainment community.

Meryl Streep delivered the biggest and most forceful broadside, using her platform receiving the Cecil B. DeMille career-achievement award to issue a powerful rebuke of the incoming administration and Trump himself. She spoke of Hollywood and the press as being among “the most vilified segments in American society right now,” before rattling off a list of fellow performers born outside the United States.
“If we kick ’em all out, you’ll have nothing to watch but football and mixed-martial arts, which are not the arts,” Streep said, to enthusiastic applause from the crowd, while taking Trump personally to task — without naming him — for mocking a disabled reporter during the campaign.
Presented by the Hollywood Foreign Press Association, the Globes have a reputation as a freewheeling affair, where booze flows and gaffes are embraced. What emerged overall, however, was tedious and dull, as NBC dispensed with any pretense of edginess by tapping its late-night host, Jimmy Fallon, to emcee the telecast, insuring there wouldn’t be any of those uncomfortable moments that, say, Ricky Gervais doled out in the past.
Given Hollywood’s liberal bent, such showcases have become closely watched targets by conservatives. And while Fallon’s few monologue jokes at Trump’s expense — including one comparing him to “Game of Thrones'” King Joffrey — were tepid at best, the otherwise drab show was punctuated by political moments that dribbled out over the night.
Hugh Laurie — a winner for AMC’s “The Night Manager” — wryly set the tone early on by dubbing this the “last-ever Golden Globes,” citing the poor outlook for something with the words “Hollywood,” “Foreign” and “Press” in its name under a Trump administration. Referencing his bad-guy role in the miniseries, he also accepted on behalf of “psychotic billionaires everywhere.”
In a more veiled gibe, the makers of the animated “Zootopia” noted that the movie’s message centered on embracing diversity, at a time when some would use fear to divide people. And “La La Land” producer Marc Platt offered a similar plea to find art “that unites us, now more than ever.”
Beyond the political speeches and “La La Land’s” record seven wins, the presentation hewed toward the sort of safe approach that provided little in the way of themes or clarity. Indeed, one of the more notable threads was that the audience seemed especially restless given the din that lingered after every commercial break.
Fallon opened with an elaborate and clever filmed “La La Land” parody, a preview of things to come. The primary suspense surrounded best drama, with the independent film “Moonlight” claiming that prize.
Still, the moments beyond the producers’ control will be what people remember, and Streep appeared to serve notice that entertainers who opposed Trump’s candidacy intend to capitalize upon such public forums to express their political views.
After the backlash elicited by a recent dearth of minority Oscar nominees, the Globes — which honor both movies and TV — also emulated the recent Emmys by featuring a number of prominent African-American winners. That list included not only “Moonlight,” but the FX comedy “Atlanta” and its star Donald Glover, Viola Davis (“Fences”) and Tracee Ellis Ross (“Black-ish”).
The winners were eclectic, diverse and in some cases, head-scratching. As usual, the relatively small body of international journalists who vote on the awards exhibited a not-so-subtle preference for European talent, including Laurie, Tom Hiddleston and Olivia Colman from “Night Manager,” Isabelle Huppert (“Elle”), “The Crown’s” Claire Foy and Aaron Taylor-Johnson for “Nocturnal Animals.”
The memorable bits were few and far between: Davis, a winner for “Fences,” connecting August Wilson’s play back to her own father; Steve Carell and Kristen Wiig amusingly bringing dour childhood memories into the animated movie presentation; and a too-brief tribute to the late Carrie Fisher and Debbie Reynolds.
After the opening, Fallon largely disappeared. It’s hard to imagine “The Tonight Show” host worked up enough of a sweat to merit changing clothes.
The producers and network nevertheless got the efficient, mostly predictable night they obviously set out to provide. That left a Golden Globes that hardly lived up (or down) to its reputation, other than those few instances when the winners spoke from the heart.
Related ItemsentertainmentGolden Globes 2017 review: Politics take center stage - CNN.com