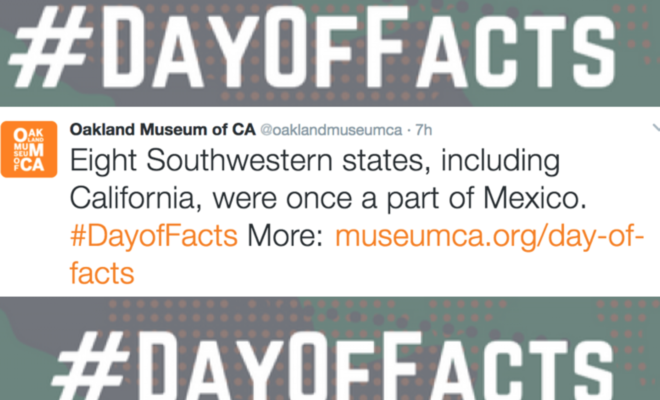 Here’s What We Learned From Friday’s #DayofFacts

Museums and libraries are typically nonpartisan institutions, but even they cant stay quiet in this political climate and amid thefake news buzz. On Friday, they took to Twitter to stand up for something thats become a puzzling political talking point: Facts.

Using the hashtag #DayofFacts, scientists, historians and even encyclopedias filled Twitter feeds with all the facts that no one not a POTUS nor political pundit could deny.

The movement was launched by two museum educators in Virginia and D.C.,and more than 280 institutions participated,according to The Washington Post.

Were using facts to illustrate truth about the present moment, Alli Hartley, one of the founders, told the Post.

Tweeted facts varied from the mind-blowing (Earth is 4.5 billion years old) to the poignant (over half of the worlds refugees are children). Most tweets seemed to address political topics: civil rights, climate change, borders and immigration,and the free press.

The San Francisco Public Library was one of the hundreds of institutions that tweeted Friday. It participated to remind our patrons and the world that libraries are a place that all people can come to and access trusted and curated information,library spokeswoman Katherine Jardine told The Huffington Post.

However, Jardine said that promoting facts shouldnt be considered a political movement because provable facts, unlike alternative facts, shouldnt be up for debate.

I think public libraries are here to encourage that notion, she said.

Of the four #DayofFacts tweets shared by the San Francisco Public Library, two were about climate change and one included the tag#BlackLivesMatter.

So, what do we get when a horde of researchers, scientists and history buffs tweet in the fight against alternative facts?

Turns out, a whole lot of truth bombs about our country, its history, its communities and the health of the planet we all call home.

Lastly, not a fact, but some wonderful insight about what knowing more can achieve: