The show of force in Ukraine was played as Russias greatest moment since the second world war. But its a risky strategy 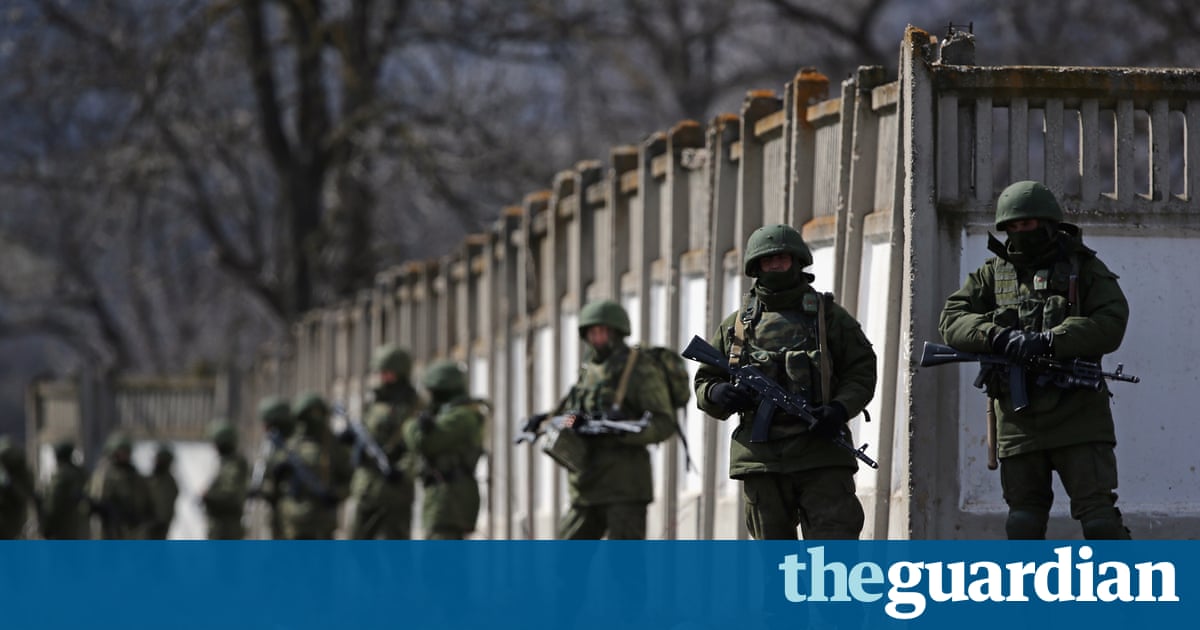 Much of the current tension between Russia and the west is a consequence of Vladimir Putins decision to send troops into Ukraine, three years ago this week. In truth, however, that deployment was a reaction to Putins own fears of growing western influence in eastern Europe.

In the winter of 2011-2012, Russia saw its largest protests since the 1990s. Provoked by the blatant fraud of the 2011 Russian legislative elections, and by Putins decision to run for president again after four years of using Dmitry Medvedev as a figurehead, the protesters formed an unlikely coalition: scruffy leftists, cosmopolitan liberals, strident nationalists and disgruntled workers. Tens of thousands of protesters gathered in central Moscow in sub-zero temperatures, white ribbons on their lapels.

Russia had long feared the possibility of a pro-democracy colour revolution on its own territory, having watched in horror as mass protests overthrew regimes in the former Soviet states of Georgia in 2003, Ukraine in 2004 and Kyrgyzstan in 2005. Putin and the state-controlled media depicted these movements as western conspiracies, CIA plots funded by George Soros. For Putin, they were threats to Russias regional authority and stability, which had already been ravaged by the fall of the Soviet Union, as well as threats to his personal power.

It was unsurprising, then, when Moscow moved swiftly to quash Russias nascent snow revolution, as it was being called by some English-language journalists. Repression came in the form of beatings and violent dispersals, arrests of opposition leaders and protesters on trumped-up charges, show trials of dissidents most famously of Pussy Riot and further curtailments of the already limited freedoms of the press, speech and assembly.

But Putins efforts to head off a potential colour revolution went beyond repression to a campaign that might have been called Make Russia great again, aimed at constructing a positive sense of Russian identity. Through a strategic combination of propaganda and geopolitical aggression, Putins government promoted a narrative meant to bolster patriotism, and Russian xenophobia and paranoia along with it.

By the end of 2013, the Russian opposition movement had fallen apart, but Putin had a new headache: the Maidan revolution in neighbouring Ukraine, a massive, mostly nonviolent protest movement that occupied central Kiev for months, and culminated in the flight of Ukraines Russia-friendly president, Viktor Yanukovych, in February 2014.

This began as a response to Yanukovychs refusal to sign an EU association agreement. Therefore, as far as Putin was concerned, it signified yet another western encroachment on his sphere of influence. The world seemed to be closing in on Russia.

But Putin was prepared. Setting in motion a plan that had clearly been developed in advance, polite little green men in military gear without insignia swarmed over the peninsula of Crimea. In just days, with almost no bloodshed, Ukrainian troops on the peninsula had been contained or won over, Crimean politicians had been induced to dissolve the parliament and replace the prime minister with a member of Crimeas Russian Unity party, and the region had been reunited with Russia. The Russian propaganda machine was already in overdrive, convincing the Russian populace, as well as the inhabitants of Crimea and eastern Ukraine, that post-Maidan Kiev was a fascist junta led by bloodthirsty Ukrainian nationalists who planned to exterminate Russian speakers, crucify Russian children, and so on.

State-controlled media pushed the idea that the return of Crimea to Russia was the greatest moment in Russian history since victory over the Nazis in 1945, the lodestone of postwar Russian identity, the tragedy and triumph that united the Soviet people. Putins flagrant violation of international law and the postwar order, through the annexation of Crimea, was an aggressive move to return to a world in which Russia was still an international superpower, filling its citizens with patriotic pride. Russians crowed, Krym nash! Crimea is ours!

Russias annexation of Crimea returned post-Soviet Russia to a narrative of imperial glory that stretched back to the days of Kievan Rus, the medieval state that was the forerunner of both Russia and Ukraine. In the 10th century, the great conqueror Prince Vladimir of Kiev converted his people to Christianity after being baptised, it is said, at the ancient Greek settlement of Chersonesus, in Crimea. The peninsula was thus the symbolic starting point of Russias membership of the Christian world. And it was Crimea that Catherine the Great annexed from the Ottoman empire without firing a single shot asserting Russias new place as one of the worlds greatest civilisations.

Of all the losses that accompanied the end of the Soviet Union, Crimea was perhaps the most haunting for Russia. As part of his quest to restore lost Russian glory, Putin picked up where Catherine the Great and Prince Vladimir had left off. After annexing the peninsula in March 2014, Putin announced that Crimea was the spiritual source of the Russian state. This gave Crimea invaluable civilisational and even sacral importance for Russia. Putin underlined his point last November, when he unveiled a 16-metre statue of Prince Vladimir outside the Kremlin.

Though it is somewhat difficult to gauge true public opinion in Russia, it does seem clear that Putins campaign to make Russia great again has been a ringing success, at least for domestic approval ratings. The fragile coalition of the 2011-2013 protest movement broke apart easily, with opposition leaders prosecuted on false charges. Boris Nemtsov, one of the leaders of the liberal opposition, was shot down right outside the Kremlin in 2015.

Today a Russian colour revolution is nearly unthinkable. State propaganda has been remarkably successful in whipping up hysteria. It helped when US and European sanctions hurt the Russian economy and raised food prices; these misfortunes which have hit the middle and lower classes much harder than they have hit oligarchs encourage the Russian people to see the west as an implacable enemy. A wedge has been firmly driven between Russias small, cosmopolitan liberal elite and its more nationalist or proletarian elements. For now, Putins neo-imperial historical fantasia has bought him time, providing many citizens with a sense of national pride that has been painfully lacking in the post-Soviet era.

But there are still wild cards at play. The stoking of Russian nationalist sentiment in eastern Ukraine has required a delicate balance. Not all of the separatists there have absorbed the message that Russian nationalism is a means to an end; some are true believers, posing another danger to Putin, who is ultimately a cynic milking globalisation and nationalist and Soviet nostalgia for all theyre worth. As their standard of living continues to deteriorate, Russians are increasingly resentful of their blatantly corrupt politicians and bureaucrats.

For the moment, Putin is taking a leaf out of Stalins book, blaming every problem on external enemies, internal wreckers or incompetents. It remains to be seen how long this can last amid the economic unravelling.