For Tamsin and Lorna, discovering their half-sister was good news at a time of gruelling treatments and agonising choices over preventive surgery 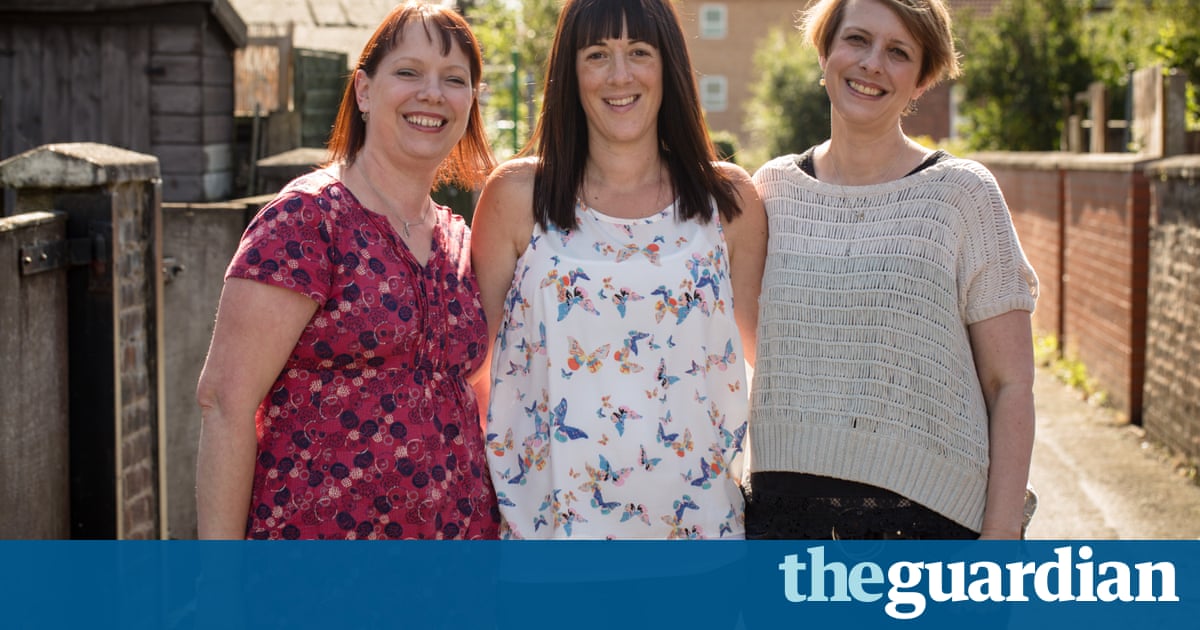 Like all sisters, Tamsin and Lorna Sargeant and Claire Pike are linked by their genes. But in their case, one gene has dominated their relationship; in fact, it was responsible for bringing them together for the very first time. In this picture of the three of them smiling in the sunshine they look happy and carefree but the gene that brought them together has led to a huge amount of heartache, and desperately difficult decisions.

The story that united these sisters begins one day in spring 2009, when Tamsin, then 40, noticed a strange thickening under the skin of her chest, just below her collarbone. She went to her GP, who knew immediately it was serious. Sure enough, tests revealed a large tumour that had spread to her lymph nodes.

It was shocking and scary: but Tamsin knew she would get through. Her sister Lorna was a big support: the two had been raised by their mother, Jennie, and stepfather, Ralph, who had died a few months before her cancer came to light.

Tamsin had chemotherapy to shrink the tumour, followed by a lumpectomy and radiotherapy. She carried on with her job as a social worker as much as possible as well as caring for her then two-year-old daughter, Esm, with her partner, Tom. By early 2010, it seemed she had put breast cancer behind her and moved on with her life.

But she hadnt. At some point, her oncologist raised the possibility of whether Tamsin might be a carrier of one of the most common breast cancer genes, BRCA1 or BRCA2. We had always been a bit worried about breast cancer in our family, on my mums side, because my grandmother and an aunt had it. But from the pattern of the disease in our family, the doctor said it was unlikely the BRCA gene was in our family.

All the same, Tamsin agreed to take part in some medical research that meant being tested for BRCA. She was asked to fill in a detailed questionnaire about her family history, which meant contacting someone she had barely seen since she was a small child: her birth father, Clive, who had split up with her mother when she and Lorna were very young. I hardly remembered Clive, and Id always regarded Ralph as my dad, says Tamsin. But I had Clives email address, so I wrote to him to ask for information about anyone on his side of the family who had had breast cancer.

Clives reply contained a bombshell. Not only had his sister and other members of his family had breast cancer, but he had another female relative to tell Tamsin about: a half-sister she had not known existed Claire, the daughter of another relationship.

The news was exciting, and unexpected, and Tamsin hoped they might get to know one another. But first, she felt she needed to rule out the possibility, however unlikely her oncologist thought it was, that her family might be BRCA carriers. I was very interested in Claire, and keen to meet her, but I felt it was my responsibility, for her and for Lorna, to make absolutely sure I didnt have this gene, says Tamsin. Id been through a horrible experience, and I thought the least I could do for them was make sure it wasnt a big risk for them, too.

The test results took a long time, but Tamsin wasnt too worried. So when in March 2011 she went along to the Royal Marsden hospital to be told she was, after all, a carrier of BRCA1, the news was utterly devastating. It was worse than being told I had cancer in the first place. By this stage, my hair had grown back and I felt my life was back to normal: now I was told I had a 50:50 chance of getting breast cancer again, and that I should consider the possibility of having a double mastectomy to reduce the risk.

But on top of that, I now had to tell Claire and Lorna that they, too, might be carriers and then they, too, would be at high risk of breast cancer.

A BRCA gene mutation isnt the most common cause of breast cancer. According to Martin Ledwick of Cancer Research UK, fewer than one in 10 cases of the disease are linked to it. But where the gene is identified, theres a higher risk of getting breast cancer. Up to 65% of women who carry the BRCA1 gene, and 45% of women who carry the BRCA2 gene will develop breast cancer by the age of 70, he says. So while it doesnt mean cancer is a given, it does mean its worth considering preventive surgery a double mastectomy to reduce the risk of breast cancer, and an oophorectomy, to reduce the risk of ovarian cancer, which is also higher in BRCA carriers.

Although she knows it wasnt rational, and that she cant possibly be held responsible for it, Tamsin says she felt the weight of responsibility of having to tell her sisters about the gene. They had seen what Id gone through, and I knew they would now be thinking, will I have all those horrible experiences ahead of me, too? Like Tamsin, they had choices to make: and the first was whether to be tested for the gene.

Whats interesting in a family is that different people react totally differently to the same piece of news, says Tamsin. It wasnt just Lorna and Claire there were others affected, relatives on Clives side of the family and my mum and her relatives. Some people wanted to have the test so they knew one way or the other; others preferred to wait and see; others wanted to have surveillance so any tumour would be discovered as early as possible.

For Tamsin, there was a different dilemma. I had to think about whether to have a double mastectomy. At first, I was completely opposed to that: I really wanted to keep my breasts, they felt like such an important part of me. Also, Id had enough of hospitals and medical treatment.

Eventually, though, she decided to have the operation. Ive got a young child, and I thought I owed it to her and Tom to do everything I could to reduce my risk of a further cancer, she says.

When the operation took place, in February 2012, there was more bad news: Tamsin already had a second cancer in her other breast. More chemotherapy followed, as well as a failed reconstruction; and because the cancer had spread to her lymph nodes, these also had to be removed. Things seemed to go from bad to worse and all the time, I knew my sisters, as well as supporting me, were thinking this could be what lay ahead for them, says Tamsin.

After her double mastectomy in 2012, she had her ovaries removed the following year. But this is another operation you dont just walk away from there are big consequences to it. You go through an early menopause and its life-changing, she says. I like the fact that Angelina Jolie, who made the same choices as me, brought the BRCA gene to everyones attention, but I dont think the suffering that goes with it has been fully appreciated.

Meanwhile, first Claire, and then Lorna, had decided to be tested. For Claire, who is 37, it took a while for the enormity of the news that she might be affected by the BRCA gene to sink in. Id never met my birth father, Clive, but my mum had told me that somewhere out there I had two half-sisters, she says. And then one day Mum came round and said she needed to talk to me about something: Clive had contacted her about Tamsin having the gene. This was before Angelina Jolie, so I had no idea what it meant but I was worried.

My GP referred me to a geneticist, and after counselling I decided to have the test Ive got a young son, and felt I needed all the information I could get. Six weeks later, she got the news that she, too, was a carrier. By this stage, Tamsin had had her preventive surgery and found out she had cancer again so I decided it was too much of a risk not to have the operation. She had a double mastectomy and reconstruction in 2013, and has just had her ovaries removed.

Lorna, who is 45, was the last of the three sisters to be tested. Im the kind of person whos happy trundling along, so I thought I didnt want to know, she says. But after a couple of years I was worrying about every little bump and ailment and whether it was cancer.

She decided to have the test in March 2014. Ive never told my sisters this, but I was worried that I might be the only one of us who didnt have the gene. It sounds odd, but I thought Id feel guilty having to tell them I was BRCA-free. Sadly, she didnt have to: she, too, tested positive.

Id already decided to have the surgery, she says. I didnt want to live with this ticking time-bomb.

For all three sisters, being brought together has been a silver lining to the dark cloud of BRCA but they dont want to minimise that cloud, or what its meant to their lives. Its been a very tough journey, and although its been wonderful to get to know Claire, the impact of the gene has coloured everything, says Tamsin. Apart from anything, theres always been one or other or us going through major surgery.

Claire says having two new sisters has been a brilliant boon to her life. Lorna and I live quite near one another in Manchester and Cheshire, so its been great being able to meet up. When I was a teenager, I used to wonder about these sisters I knew nothing about, so its wonderful to have got to know them eventually. And given what weve had to face up to, its great that all of us know exactly what the others are going through weve always had someone to talk to who understands.

Lorna agrees: Weve had one another and been able to compare scars and nipples and lack of nipples, she says. My big hope now is that, at some point in the future, we can put BRCA into the box where it belongs, and just enjoy our lives together.