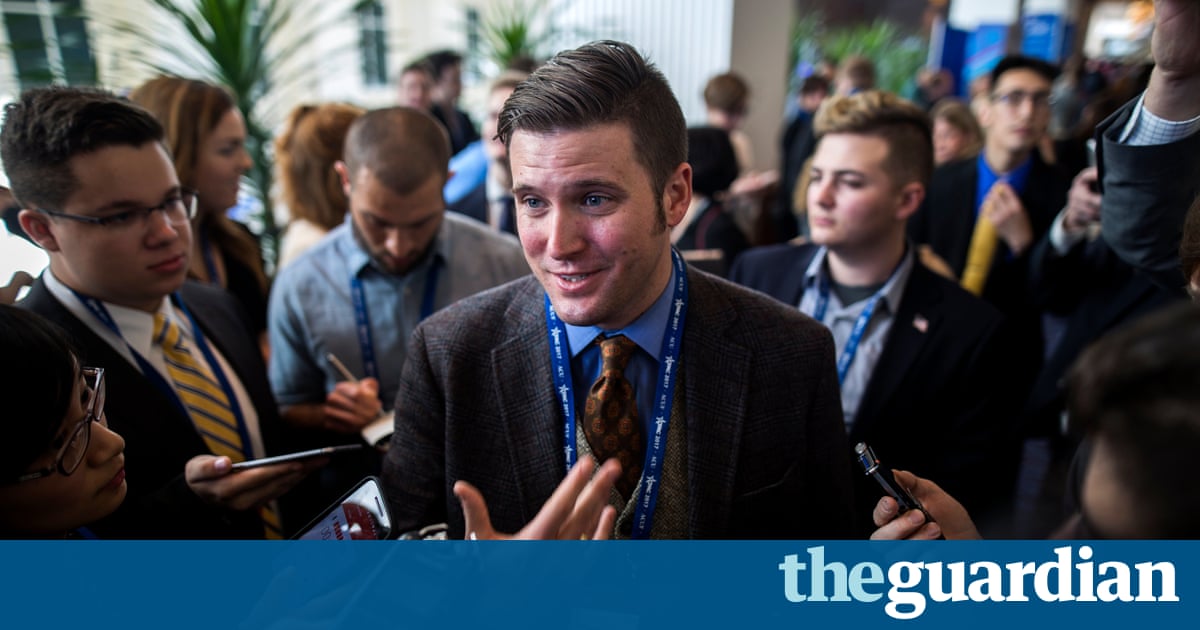 For months, journalists have debated how to cover the alt-right, a fractured far right movement of racists, misogynists and antisemites that greeted Trumps victory with euphoria.

In these debates, liberals have often framed the greatest danger as understating or normalizing the true extremism of Trump and his allies.

But in a joint podcast in December, three alt-right leaders took the opposite view: by connecting their extreme views with those of White House leaders, journalists and left-wing advocates had done extremists a favor.

The neo-Nazi, the white nationalist and the antisemite all agreed: the media coverage of the alt-right had been amazing.

The coverage is very good, all the things theyre doing are so good, said the Neo-Nazi Internet troll. Theyre now saying that Steve Bannon is a neo-Nazi. I mean, think about how, how great that is!

Theyre giving us the microphone out of their own sort of paranoia and neurosis and sort of perverse desire to actually empower us, said an anti-Semitic and eugenicist blogger and podcast host.

I think in a weird level the left, like, secretly wants us to rise, said Richard Spencer, who became the face of the alt-right in media reports and was profiled as Americas dapper white nationalist.

Journalists usually argue that sunshine is the best disinfectant, and that exposing extremist opinions to public scrutiny is the best way to address them. But far-right leaders shameless self-promotion has challenged this assumption.

Analysts who monitor hate groups said that the racist leaders were delusional and conflated their rising prominence in the media with actual political support. At the same time, they said, the extremists did present real challenges for journalists.

Ryan Lenz, a former Associated Press war correspondent who now tracks hate groups at the Southern Poverty Law Center, said he saw a tipping point at the Republican National Convention last summer, when Spencer stood outside with a sign that read, Wanna talk to a racist?

Since the Civil Rights era, being publicly known as a racist in America had been seen as shameful, Lenz said. There were serious political consequences, social consequences, to be known to have these ideas.

But Spencer and his sign represented a new moment, he said, and a person who thrives on being called a racist, who does not suffer, and will not suffer, the social, financial and cultural consequences of being a racist.

Look, I get it that most all of these media sources are going to be negative, but like, we are able to communicate through the media, Spencer told the other alt-right leaders in December.

Kyle Pope, the editor in chief and publisher of the Columbia Journalism Review, said that the way Trump has energized fringe racists, and the connections between the administration and the far right was a totally legitimate area of focus, and one that could not be avoided.

I know there was some hand-writing in the press about, Why do we give these people so much air play? but I think this is a voice that we clearly have to understand, he said.

Pope said it was too bad that a neo-Nazi thought the media coverage was helping him. But, he said, People need to understand that there are people in their neighborhood or their city who have these views, he said.

Closing our eyes to it is not going to make it go away, he said. Were not three year olds. You cant see something you dont like and close your eyes and it just disappears.

A big disappointment-burger for us to eat

The December alt-right podcast, hosted by an antisemitic blogger known as Mike Enoch, represented an important political moment for the alt-right, with three leaders of different wings of the movement coming together to present a united front, two analysts who study hate groups said. In a conversation that lasted for several hours, the three alt-right leaders flattered each other, traded juvenile jokes, talked about their hair, and marveled at the extremely beneficial media coverage they were receiving. The analysts said the views expressed in the podcast seemed sincere not an attempt to troll listeners with false opinions.

For months, journalists had been publishing stories drawing connections between Trump, his staff, and his cheerleaders in the Ku Klux Klan, the so-called alt right, and other hate groups. While the alt-right leaders praised Trump in their December discussion, a month before his inauguration, they also said that they did not think his actual policies would excite them.

Im afraid that Trump really is going to be a big disappointment-burger for us to eat, Spencer said.

Enoch agreed, but said that did not matter. Trump now is just a vehicle, he said. The man Trump maybe doesnt matter so much. The meme of Trump is more important.

Enoch said that Spencer, once a fringe figure, had received so much press coverage because journalists were desperate to set up a story of Donald Trump and the alt-right.

By applying the label of Nazi too frequently, the left was weakening the impact of the word, the alt-right leaders agreed.

They cry wolf, you know, said Andrew Anglin, who runs a neo-Nazi website that organizes harassment attacks against Jewish people and their allies. People are going to look at you and say, This guy must be like this other guy they called a Nazi. Hes probably just normal.

Lenz, the Southern Poverty Law Center researcher, called this an astute observation of the effect of this coverage.

I hate to agree with Anglin in any way, [but] theres some truth in that, said Marilyn Mayo, a research fellow at the Anti-Defamation Leagues Center on Extremism. If you start calling everybody a white supremacist and neo-Nazi, you are making the term kind of meaningless.

There are people who are calling the president a white nationalist. I just dont see that being the case, Mayo added

Steve Bannon is not a Nazi, Lenz added.

At the same time, Mayo said, We also have to be very cautious on the other side, to make sure that when we do see extremism seeping into the mainstream, we call it out.

In November, after Spencer shouted Hail Trump! Hail our people! Hail Victory! at a conference, and some supporters gave the Nazi salute, Trump disavowed and condemned this Nazi support in an interview with the New York Times. But Trump has faced continued criticism for his lack of strong response to a wave of antisemitic and hate crime attacks. Steve Bannon, a leading White House advisor, once called the website he ran a platform for the alt-right, and has been labeled a white supremacist by house minority leader Nancy Pelosi. Bannon has told reporters, Im not a white nationalist but Im an economic nationalist.

There was an irony to the analysis of Trump voters, Spencer said: white nationalists were actually in agreement with some on the left that Trump was fundamentally leading a white identity movement even as Trump voters themselves vehemently rejected this label, and protested being called racists.

Pope said that it was important for journalists to be very specific about the precise links they found and did not find between far-right figures and the White House, rather than taking the lazy route of talking in sweeping terms about a vein of thought thats now running the American government.

There hasnt been enough clarity and specificity to delineate between these various groups, Pope said. You read stories that encompass everything from the Wall Street Journal to neo-Nazi groups, which is obviously not helpful.

Like Trump and his allies, who have excoriated the media as the opposition party and labeled CNN the Clinton News Network, the alt-right leaders express a deeply cynical view of journalist motivations, suggesting that reporters give extremists so much coverage out of political bias, boredom or the desire to drive traffic to their news sites.

The simple reason his white nationalist views had been given the spotlight, Spencer said, was: Im very good looking, Im very intelligent, Im very compelling when I speak.

In an e-mail to the Guardian, Anglin, the neo-Nazi troll, adopted the lefts own terminology, and suggested that the non-stop media coverage of the alt-right had actually accomplished a normalization of his ideas.

He said the medias constant churn of outrage and spectacle was extremely beneficial to him, especially since his goal is changing the political orientation of very young Americans, particularly teenage boys.

This is why I love the media so much they cover my site with outrage, in turn I get more traffic and more on board with my agenda, in turn the media produces more spectacle, Anglin wrote.

The coverage only has one effect, which is the normalization of our ideas. And it doesnt take a political scientist to figure that out. If it isnt purposeful, then it is absurd incompetence.

Spencer said in December that even after the high intensity coverage of far right ideas melted away, the alt-right would have gained significant ground.

But Mayo said that much of the alt-right leaders analysis of their own rise to power was wishful thinking.

They may get attention, but people know what theyre about, Mayo said. Its not as if theyre gaining mainstream acceptability. Theyre not.

In January, Spencer was punched in the face at Trumps inauguration, an attack that prompted wide celebration on social media and debates over whether it was ethical to punch a Nazi. (A January survey of 1,000 registered voters found that 51% believed that it was unacceptable, but 31% were unsure.)

Asked whether the viral popularity of the video of him getting punched in the face suggested that most Americans found his views repulsive, Spencer said: Well see about that.

Contacted through his website e-mail, someone who identified himself as Mike Enoch declined to answer questions over email.

In January, Enoch was reportedly doxxed and unmasked as Mike Peinovich, a New Yorker and former tech worker married to a woman who is Jewish. The controversy sent shockwaves through the antisemitic alt right, where Enoch was a leading figure.

Pope said the mainstream media did fail in not covering these extremists groups enough before the 2016 election and then in being surprised at the size of their support and the content of their opinions.

Theyve been there for a very long time. There are segments of the American population who are totally not shocked to hear that this is out there, he said. There was a reporting failure to really understand who these people were, until the rise of Trump.