How the Simpsons and others predicted President Trump

Sixteen years ago it was a punchline for Lisa Simpson. In Back to the Future, he was the model for the bullying bad guy. Is the joke still funny? 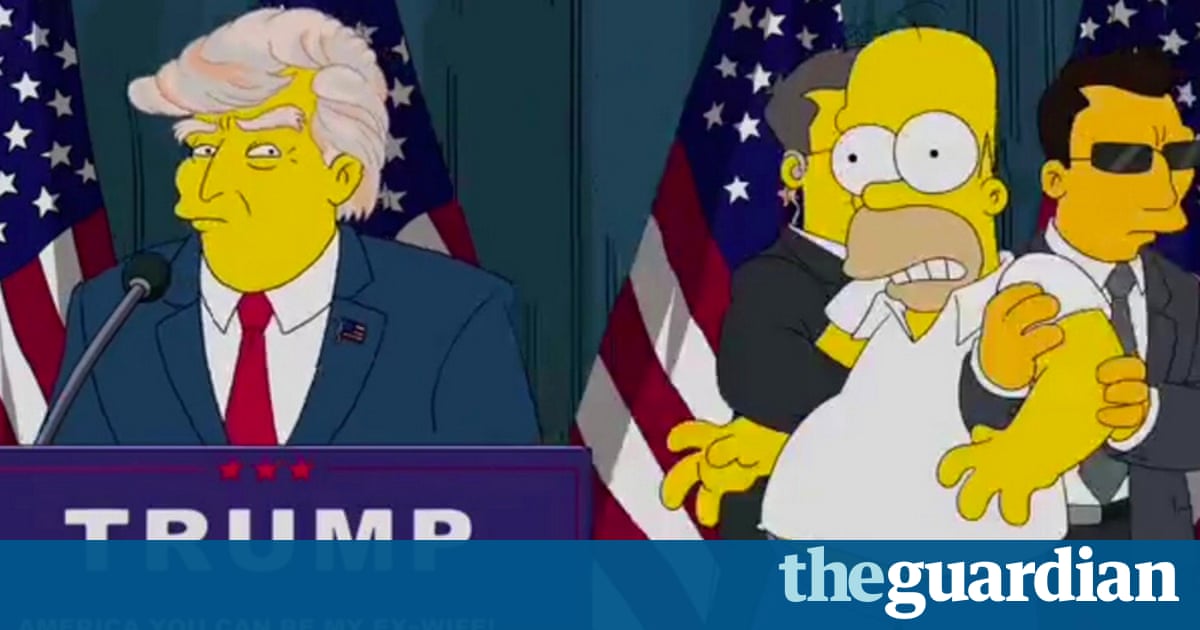 The truth may currently feel stranger than fiction, but Donald Trumps emergence as a political leader and even his presidency has been predicted in fictional dramas more than once. The outcomes, notably, have not been good.

In 2000, Bart to the Future, an episode of the Simpsons in which Bart imagines his coming years, showed Lisa Simpson taking over as Americas first straight female president from an outgoing President Trump. As you know, she tells her team in the Oval Office, weve inherited quite a budget crunch from President Trump.

She asks how bad things have got, to be told the country is broke, as the previous regime invested in the nations children but created a generation of ultra-strong super-criminals.

What may have seemed, 16 years ago, an implausible fantasy was intended as a warning to America, the episodes creators told The Hollywood Reporter earlier this year.

The important thing is that Lisa comes into the presidency when America is on the ropes, and that is the condition left by the Trump presidency, the episodes writer Dan Greaney said. What we needed was for Lisa to have problems that were beyond her fixing, that everything went as bad as it possibly could, and thats why we had Trump be president before her.

A potential president Trump just seemed like the logical last stop before hitting bottom, he said. It was pitched because it was consistent with the vision of America going insane.

Fifteen years later, after Trump did in fact announce his candidacy, a new Simpsons short, Trumptastic Voyage, poked fun at the wannabe world leader (and his hair).

Images from this cartoon of Trump at the presidential podium and descending an escalator in Trump Tower have, wrongly, been circulated on social media (and now in some old media, too, notably Thursdays front page of the Sun) as part of that 16-year-old prophecy.

Trump has also been credited by the co-creator of the Back to the Future movies as the inspiration for Biff Tannen, the bullying bad guy character of the time-travelling 1980s trilogy.

In the second film, Back to the Future II, Biff has become one of the richest and most powerful men in America by cheating at gambling, formed a vast empire called Biffco, and successfully lobbied to legalise gambling and build an enormous casino hotel. When the film was released in 1989, Trump was already well known as a casino and property mogul.

Interviewed by The Daily Beast last year, co-writer Bob Gale confirmed he had Trump in mind when he created the character. We thought about it when we made the movie! Are you kidding? You watch Part II again and theres a scene where Marty confronts Biff in his office and theres a huge portrait of Biff on the wall behind Biff, and theres one moment where Biff kind of stands up and he takes exactly the same pose as the portrait? Yeah.

The interviewer notes that in the movie, Biff uses the profits from his casino to shake up the Republican party and assume political power himself, transforming his local town Hill Valley into a lawless, dystopian wasteland where hooliganism reigns, dissent is quashed and citizens are encouraged to call him Americas greatest living folk hero.

Yeah, thats what we were thinking about, replies Gale.

In a less cryptic prediction, the Simpsons creators also released a brief animation earlier this year in which Homer is considering whether to vote for Trump or Clinton. He watches a TV presentation which shows President Trump in bed when the situation room phone rings at 3am. Beside him on the bed is a book entitled Great speeches: A. Hitler.

Not now, Im on Twitter! yells Trump, who pauses to tap into his phone: And [Massachussetts senator] Elizabeth Warren tweets too damn much. Glad I exiled her.

He then lifts the phone to say: Oh and put my name on the Lincoln memorial, make [New Jersey governor] Chris Christie eat a worm just for laughs, disband Nato, and make me some scrambled eggs on a gold plate.

He then rings a bell, summoning a team of makeup artists who paint his face orange, place fake mittens over his tiny hands and put a shaggy dog on to his head. The phone rings again. Were too late? Chinese fleet is advancing? Just build another wall. YES, IN THE OCEAN, LOSER.

The TV presentation ends with a voiceover stating it is paid for Americans who are really starting to miss Obama.