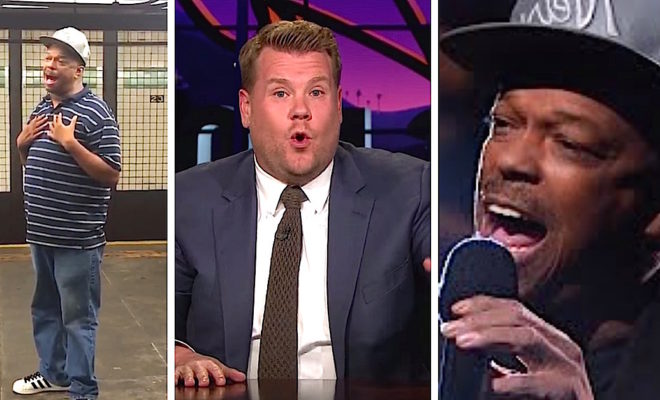 James Corden Flips Over Subway Singers Voice, Then Tracks Him Down To Sing On National TV

There are leagues of talented subway singers in New York City. And while most of them undoubtedly dream of being discovered, most of them never make it to the masses.

Mike Yung is one of the lucky few who can now say they’ve been discovered in the hustling, bustlingunderground subway system of Manhattan.

Corden was so impressed by Yung’s impromptu subway performance that he demanded the singer perform on his show, The Late Show With James Corden!In turn, Corden gave the unknown vocalist an opportunity to share his talent with the world and Yung did not disappoint.

Like a seasoned professional, Yung recreated his viral performance of “Unchained Melody,” the classic song from 1965, and dazzled Corden’s audience. His voice is full of so much old-school soul, it’salmost like he stepped out from a different time.

I have a feeling we’ll be seeing a lot more of Mike Yung, and that’s definitely a good thing for music. How cool is it that he can thank the internet for shooting him to stardom?!

Simon
← Previous Story 4th Grade Teacher Of The Month Sparks Controversy Because Of Her Body Type
Next Story → Boy Grows His Hair Out For Cancer Patients, Hes Unrecognizable After A Haircut
Advertisement