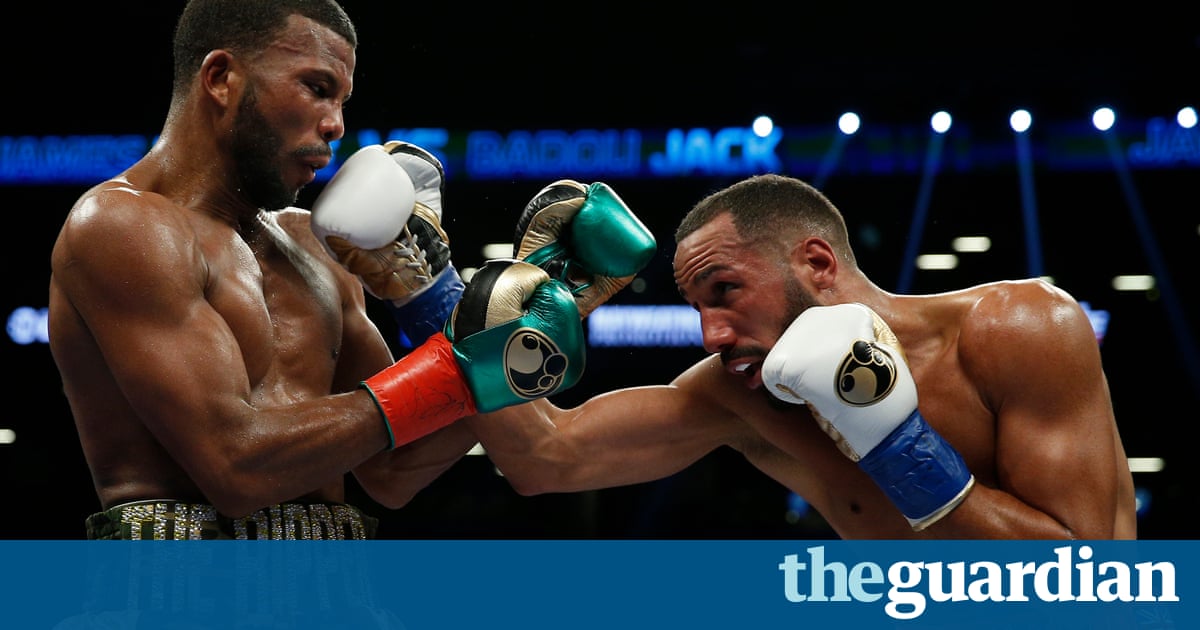 James DeGale clattered to the canvas in the final round of Saturdays super middleweight title unification fight, dropped by a counter right uppercut that Badou Jack had seemingly pulled from his back pocket. The Olympic champion, who had knocked Jack down in the opening round and raced to an early lead on the scorecards, was on the floor for the first time in his career and in serious danger with nearly two minutes until the bell.

It was the sort of white-knuckle drama only a championship fight can produce. And when the southpaw from London beat the count and somehow flailed out of the emergency to finish on his feet, the roars from the crowd of 10,128 at the Barclays Center confirmed the calibre of valour on display. When the scores were announced, DeGale and Jack were no closer to the unification of their super middleweight titles than before. One ringside judge tipped it 114-112 to DeGale while the other two scored it 113-113. (The Guardian had it 113-113.)

It was an encounter that had it all: knockdowns both ways, a lost tooth, a stray punch that nearly knocked out the referee. But most importantly, round after round of fearless two-way action between the two best fighters in their weight class. It was as close as fight as youll ever see.

But Floyd Mayweather Jr, who promotes Jack, saw it differently. And in voicing his dissent did his fighter and the sport a disservice, casting undue controversy on an otherwise banner night for boxing. It started when he hijacked the mic after both fighters initially expressed desire for a rematch during a joint in-ring interview.

James DeGale is a hell of a fighter, but tonight he didnt win, Mayweather said, prompting a crescendo of boos from the crowd. Badou Jack was the better man tonight.

It was even worse when Jack was then asked if he would fight DeGale again his response: Ill fight anybody but Mayweather stepped in again to make his fighter look like the bad guy.

Im the promoter, Mayweather said. This is my fighter. Its all about being fair. At the end of the day, this is really bad for boxing.

DeGale had used deft footwork and command of distance from the opening bell to stay out of mid-range and stymie Jacks jab. But what appeared to be a standard feeling-out round suddenly escalated when DeGale lunged forward and split the jab with a straight left to catch Jack off balance, dumping the Swede to the canvas.

The flash knockdown didnt hurt Jack, but put him at an immediate disadvantage on the scorecards that only grew as DeGale continued to box masterfully in rounds two and three, scoring consistently with the straight left and using angles and lateral movement to frustrate his opponent. Jack continued to look flat-footed in the fourth and it seemed DeGale was in danger of running away with the piece.

He was slapping a lot, Jack insisted afterwards. It looks good to the judges but theyre not clean punches.

Jack found his footing in the fifth, landing his best punches of the night amid violent exchanges that enthralled the crowd. So completely was Jack swept up in the moment that he managed to clip referee Arthur Mercante Jr with an errant punch when the bell rang to end the round.

The Swede continued to dig back in the sixth, trapping DeGale against the rope and unloading combinations upstairs. A devastating body shot visibly hurt the Englishman, who briefly appeared in trouble before making it to the bell. The action carried into the seventh as DeGale now stood in the pocket trading with Jack, at one point cracking the Stockholm native and Las Vegas transplant with a left uppercut that Jack seemed to walk right through.

DeGale was hurt again with a lunging overhand right in the eighth, losing a tooth when his mouthpiece was knocked to the canvas. He came back strong in the ninth, but Jack showed patience and poise as DeGale betrayed signs of fatigue. Then came the final round and the knockdown that nearly ended it inside the distance. Somehow DeGale mustered the bravery to make it to the finish line.

I had to dig down deep and try to knock him out and finish strong, said Jack. I definitely finished strong. If it wasnt for the flash knockdown, its a different result.

DeGale said: Ive got huge respect for this man, but I thought I won that. I landed the cleanest shots.

Everyone, including the fighters, seemed to agree that a rematch makes sense, particularly given how entertaining the first instalment turned out. But when Jack was asked about it at the post-fight press conference, Mayweather again interrupted and assumed an even more obstructionist stance.

Me and Badou Jack, we already communicated. The goal was to fight this fight, then for him to move up to light heavyweight. Hes a big super middleweight.

It didnt stop there. He put forth aspersions regarding the judges, implying they take payments from promoters. He even threatened to take his business elsewhere. How Im feeling, I dont really want to come back and fight on the east coast anymore, he said.

Mayweather is settling comfortably into the role of promoter. Hes made demonstrable strides in his public speaking and knows how to sell an event. He said on Saturday night that he knows more about boxing, both in and out of the ring, than anyone and hes probably right.

But on perhaps the greatest night of Badou Jacks life, Mayweathers bluster made his fighter look like a chump. And if Mayweather does prevent the rematch from happening against Jacks wishes, well know hes one.