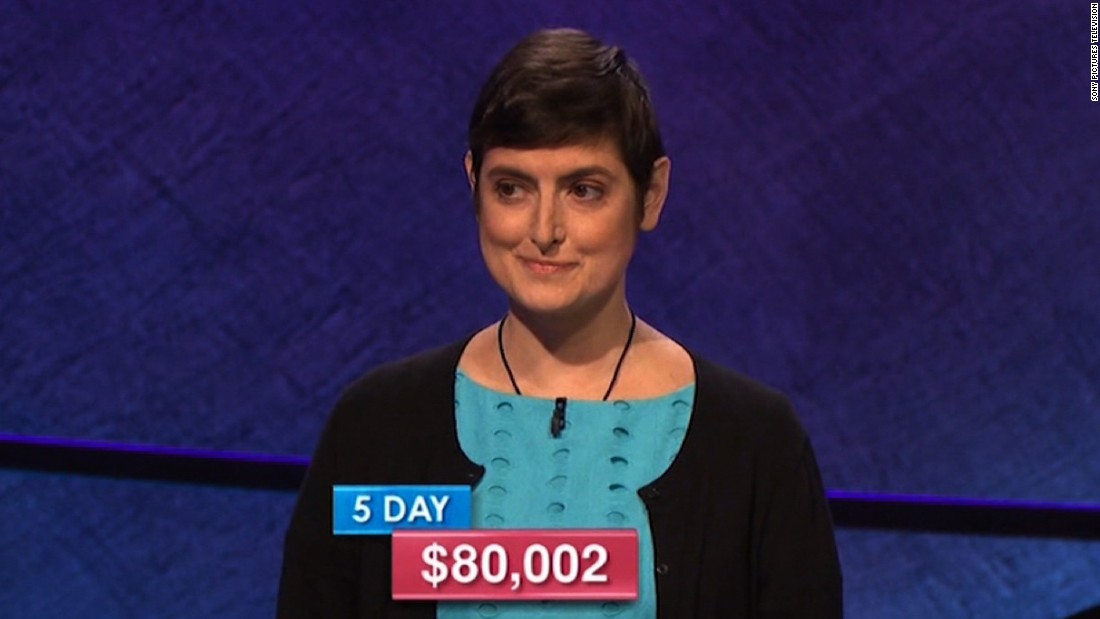 On a cruise with her mother some 15 years ago she joined a group of British teenagers in mooning the coast of France.
Little did the audience or her fellow contestants know she had a much bigger secret: At the time of the taping she was battling Stage 4 colon cancer and had only months left.
By now, the world knows that the 41-year-old science content developer from Austin died on December 5, before her episodes aired.
Stowell’s seventh and final episode aired Wednesday, ending her six-game winning streak. She answered the final question correctly: The closest nation to mainland US where cars drive on the left? The Bahamas.
But she didn’t wager enough to pull in front of challenger Sam Scovill, whose film and television knowledge overtook her prowess in categories such as Working Women and words that rhyme with “rhymin’.”
Only a select group of “Jeopardy!” staffers and host Alex Trebek knew she was ill. The show revealed news of her death on its website one week before her first appearance.
Neither Trebek nor Stowell let on about her condition throughout her run, even as her voice shrank to a whisper at times. Her longtime partner, Jason Hess, said she was fighting a high-grade fever that turned out to be a blood infection and was on painkillers while taping.
It was only at the end of the episode, after the credits, that Trebek acknowledged her passing.
“Appearing on our show was the fulfillment of a lifelong ambition for that young lady,” Trebek said.
“From all of us here at ‘Jeopardy!’ we offer our sincerest condolences to her family and friends.”

‘I don’t have too much longer’

Stowell passed the online test in early 2016. She knew her time was short when she was invited to audition in person this summer.
“Do you have any idea how long it typically takes between an in-person interview and the taping date?” she said in a message to a producer. “I ask because I just found out that I don’t have too much longer to live. The doctor’s best guess is about six months.”
She attended the audition in Oklahoma City and qualified. True to their word, producers booked her in the soonest available taping three weeks later on August 31.
Stowell competed on “Jeopardy!” with a single goal in mind: to donate her prize money to cancer-related organizations.
Stowell went into her final show with earnings totaling $103,803 — topping her goal of $100,000, Trebek noted at the show’s start.
Hess, confirmed her death — and her Jeopardy appearance — on December 5.
“In the early morning hours cancer took the best friend, partner and pub trivia teammate a guy could ask for. Love you always,” he said in a tweet.
For many her story became a bittersweet yet inspiring note on which to end a turbulent year.
As one person noted on Twitter, “In a horrible year like 2016, I’m so happy to see that this inspiring story will continue on. We love you Cindy… Keep on winning.”

Simon
← Previous Story Helen Mirren: Going without make-up is ‘wonderful’ – BBC News
Next Story → An Open Letter To Everyone Spending The Holidays Alone