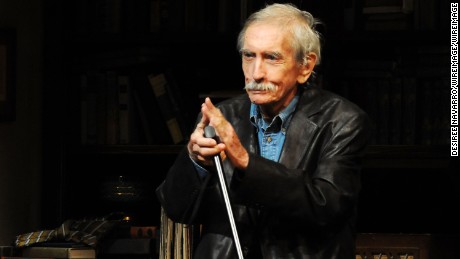 (CNN)Legendary playwright Edward Albee, widely considered one of the greats of his generation, has died at the age of 88, according to his personal assistant Jakob Holder.

Albee, a three-time Pulitzer Prize winner, died Friday afternoon at his home in Montauk, New York. Albee died after a short illness, according to Holder.
Albee’s career spanned five decades. His first play, “The Zoo Story,” came out in the late ’50s and centered on two men who have a chance encounter on a New York City park bench. It has a violent conclusion but helped set the tone for Albee’s raw and uncompromising works to come.
His best known work is arguably “Who’s Afraid of Virginia Woolf?” an intimate portrait of a volatile marriage.
It was after that play that Albee began drawing comparisons to the likes of August Wilson, Arthur Miller and Tennessee Williams.
The play was adapted into a film in 1966. It starred Richard Burton and Elizabeth Taylor, who both went on to be nominated for Academy Awards.
Though the play had been out for years, the film itself was the subject of controversy due to its use of profanity like “screw you.” Warner Bros. agreed to put a warning on the film that moviegoers under the age of 18 would not be admitted without an adult. R ratings did not exist at the time.
Albee’s work could hit nerves like no other.
“If you’re going to spend $100 or more to go to the theater, something should happen to you,” he told Charlie Rose in 2008. “Maybe somebody should be asking you some questions about your values or the way you think about things and maybe you should come out of the theater (with) something having happened to you. Maybe you should be changing or thinking about change. But if you go there and the only thing you worry about is where you left the damn car, then you wasted your $100.”
He was also known for the plays “A Delicate Balance” and “Seascape,” among others.
Notable figures in theater have already begun to mourn Albee’s passing.
Adina Porter wrote on Twitter: “Edward Albee & THANK YOU for sharing your genius with we mortals. Thoughts and prayers to his friends and family.”
And actor Josh Gad called Albee “one of the Titans of theater.”
“Amongst the greatest playwrights of our time and possibly all time,” he wrote.