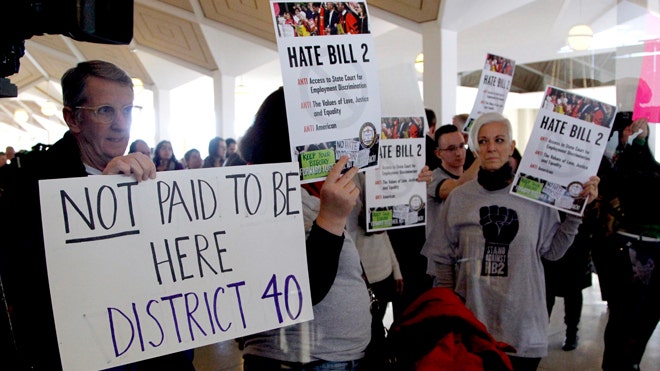 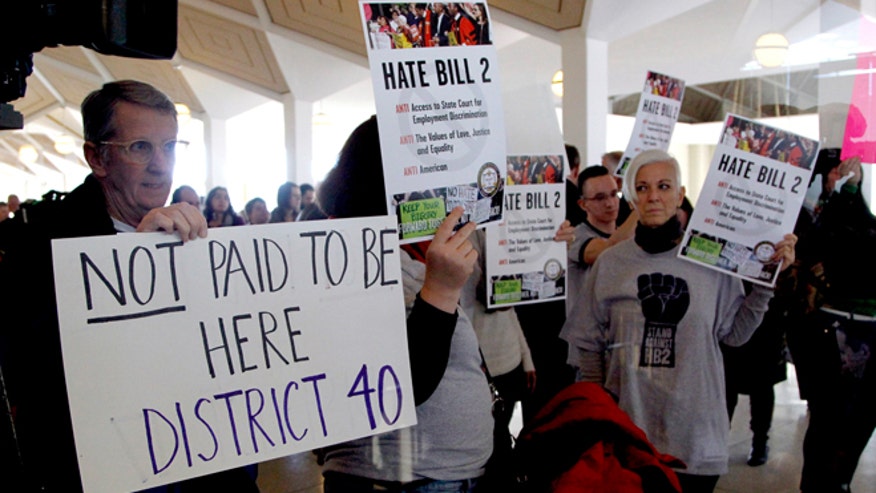 The North Carolina Senate Wednesday voted down legislation to repeal the controversial law known simply as the bathroom bill, months after the measure limiting LGBT protections triggered an economic backlash for the state.

The Senate voted 32-16 against the repeal effort before voting by the same margin to adjourn, ending the special session two days after the Charlotte City Council gutted an ordinance that in March led the state’s General Assembly to pass House Bill (HB) 2. The state House also adjourned without voting.

According to a statement from the North Carolina Republican Party, not a single Democrat voted to repeal HB2 on a straight up and down vote.

“It’s even more absurd that Govenor-elect Cooper privately pressured Senate Democrats to reject the deal while publicly calling on lawmakers to support a repeal,” said NCGOP Chairman Robin Hayes. “This is nothing more than smoke and mirrors and the people of North Carolina deserve more than the lies and collusion that Roy Cooper has fashioned himself accustomed to.”

Republicans wanted the provision out of concern that cities would enact Charlotte-like measures that could survive under the incoming Democratic administration in the state capital.

However, Democrats pushed back against the moratorium, calling it only a partial repeal of HB2.

“This wasn’t the deal,” said Sen. Jeff Jackson, a Charlotte Democrat. “This bill breaks this deal. Charlotte would have not repealed its ordinance if this was the deal.”

The Senate came back in session Wednesday evening with Senate Speaker Phil Berger suggesting as a last chance that the HB2 repeal efforts be split into two segments: the repeal itself in one vote and then a cooling off period in a separate vote.

After the repeal vote was attempted, Berger suggested sending the bill to rules committee. Senate Majority Leader Harry Brown then tried to have the Senate vote again. His motion was tabled before the body voted to adjourn.

“Tonight the North Carolina Senate voted to keep the protections provided by our privacy law, HB2, in place,” said Tami Fitzgerald, NC Values Coalition Executive Director in a statement. “We continue to encourage our leaders to never sacrifice the privacy, safety, or freedom of young girls by forcing them to use the bathroom, shower, or change clothes with grown men just to satisfy the demands of greedy businesses, immoral sports organizations, or angry mobs.”

The special session came about after a bitter election battle that Republican Gov. Pat McCrory lost to Democrat Roy Cooper.

Cooper said he was “disappointed” that the legislature “had the chance to do the right thing for North Carolina and they failed.”

“This was our best chance,” he said. “It cannot be our last chance.”

During the campaign, Democrats hammered McCrory over the law he signed and its fallout — job losses, canceled concerts and sporting events. The state’s Republican leaders said at the time they were willing to consider repealing the law if Charlotte acted first to undo its expanded antidiscrimination ordinance. But the mayor and most council members, with the support of gay rights groups, had been unwilling to do so in the name of equality.

Yet after McCrory conceded, the Democrat-controlled council in Charlotte abruptly moved to roll back the measure. McCrory kept to his word and called a special session, but accused Democrats of playing politics all along by keeping Charlotte from nixing its overreaching ordinance earlier.

The sudden reversal, with little notice after the gubernatorial election has ended, sadly proves this entire issue, originated by the political left, was all about politics at the expense of Charlotte and the entire state of North Carolina, McCrory said in a video message.

Some social conservatives still urged against repealing the state law. Even the fact lawmakers were called back to Raleigh by McCrory a month before their 2017 session’s start was challenged.

“There is no extraordinary circumstance,” said Rep. Jeff Collins, R-Nash, “other than the extraordinary hubris of a city council telling us we have to act by a certain date.” Monday’s action by the Charlotte council was contingent on HB2’s repeal by Dec. 31.

HB2 was best known for requiring transgender people to use restrooms and other facilities corresponding to the sex on their birth certificate rather than their gender identity.

It also limits statewide protections for lesbian, gay, bisexual and transgender people in public accommodations and employment, and it reinforced a prohibition on local governments from raising minimum wage. Local governments are also prevented from enacting nondiscrimination measures that would go further than state law.

LGBT groups, which had fought any deal with legislators earlier this year to do away with the Charlotte ordinance, got on board in the name of nixing HB2.

“Full and complete repeal of HB2 is the only acceptable outcome,” Stephen Peters of Human Rights Campaign said Tuesday in an email.

Simon
← Previous Story Michael Phelps Looks Ridiculous Yet Badass Wearing ALL Of His 23 Gold Medals For Sports Illustrated!
Next Story → Alleged rape in Minnesota should horrify every father
Advertisement