Quarterback Derek Carr broke a bone in his right leg in the Raiders 33-25 victory over the Indianapolis Colts, throwing a dark cloud over a resurgent season 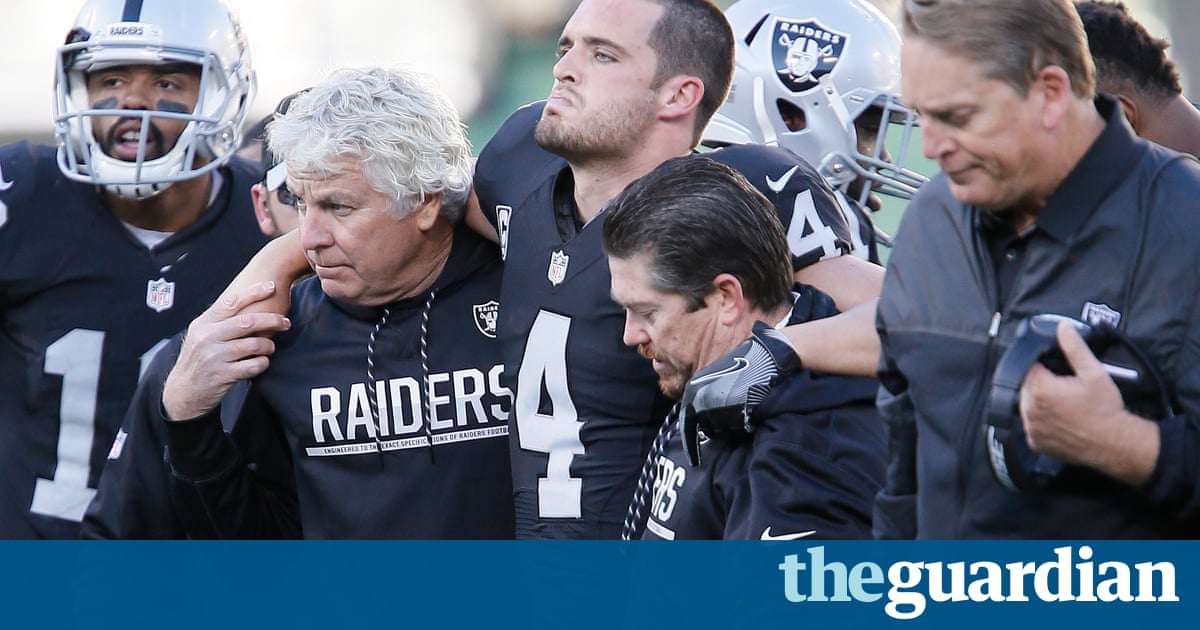 The Oakland Raiders suffered their most significant loss of the season. Quarterback Derek Carr broke a bone in his right leg in the fourth quarter of the Raiders 33-25 victory over the Indianapolis Colts on Saturday, immediately throwing a dark cloud over a resurgent season in Oakland.

Its obviously a blow, coach Jack Del Rio said. Thats what teams do. Teams have to find a way to pick up and move on, rally around the next guy the best we can. Thats what we do.

Carr got hurt with Oakland leading 33-14 early in the fourth quarter when he was sacked by Trent Cole. Carr stayed on the ground for several minutes in pain as trainers came out to treat him.

With the crowd chanting M-V-P! M-V-P! Carr limped off the field without putting any pressure on his right leg. He was then taken away on a cart for X-rays which showed the break. Carr will have surgery on Sunday.

As soon as I got out there, he said, I think its broken, Del Rio said. Most athletes have a pretty good idea something has gone on with their body.

The injury changed the mood at the Coliseum from celebratory to depressed as thoughts turned from the Raiders (12-3) possibly clinching the division with one more win or a Kansas City loss to wondering if an opportunity for a possible Super Bowl run was now lost.

Im sad, left tackle Donald Penn said. Its very sad. Im very disappointed in myself because it was my guy who got him.

Carr had led a revival in Oakland since arriving as a second-round pick in 2014. After losing his first 10 games as a rookie, Carr has been a big part of the turnaround that has the Raiders in the playoffs for the first time since 2002.

He threw three TD passes on Sunday to give him 28 on the season and his seven fourth-quarter comebacks are the biggest reason behind Oaklands success.

Now the team must prepare for a playoff run with Matt McGloin at quarterback. McGloin has not started a game since the end of the 2013 season with Carr starting all 47 games since he arrived.

Its more involved when its your quarterback, Del Rio said. But just like you do with any position, you carry on as a football team and put the next guy in.

Carrs injury made it a down day all the way around. Andrew Luck threw two interceptions, Frank Gore lost a fumble and Indianapolis (7-8) allowed TDs on five straight drives to be eliminated from the playoffs for the second straight year.

Luck rallied the Colts from 26 points down to just eight with 2:33 left, but McGloin completed a 19-yard pass to Amari Cooper on third-and-8 on the next drive and the Raiders ran out the clock.

— In Sundays other later kick-offs the Buccaneers loss to the Saints guaranteed playoff places for the Falcons and Giants. The Cardinals and 49ers won close games over the Seahawks and Rams respectively. Sunday Night Football ended with the Texans defeating the Bengals after a last-minute field-goal miss from Cincinnati kicker Randy Bullock. The result sealed Houstons place in the playoffs.