Rutger Bregman: We could cut the working week by a third

Could this young Dutchman, hailed as a visionary, galvanise the left with his radical plan for a borderless future in which we are all paid for working less? 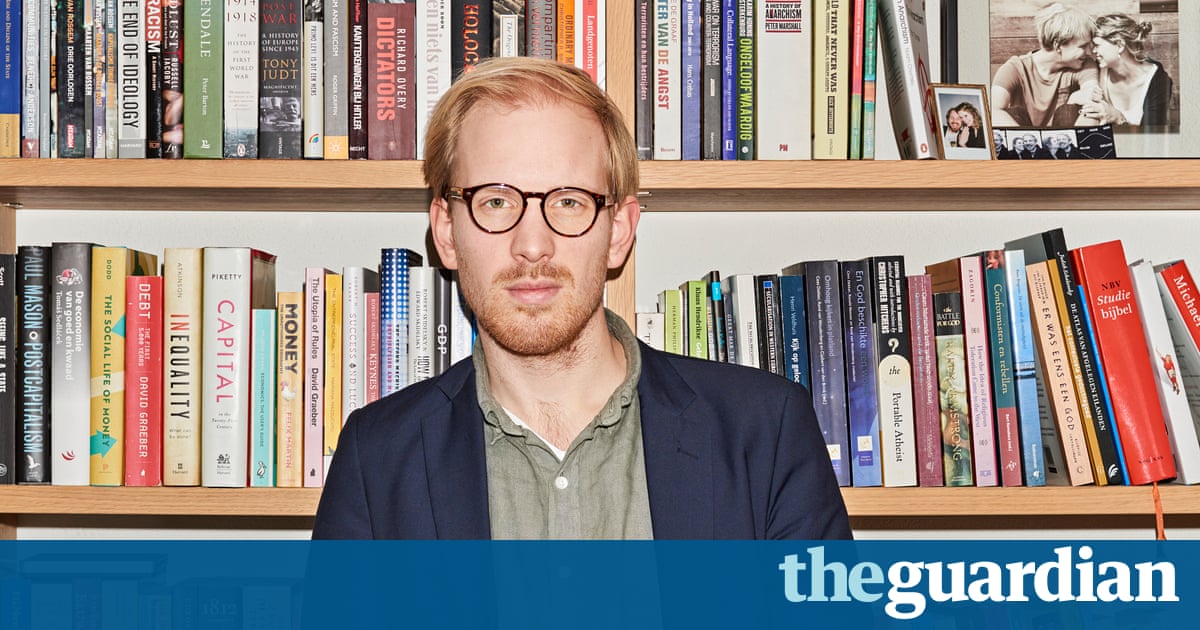 As liberal democracy seems to be crumbling under the weight of widespread despondency, some hardline opinions are in danger of becoming received wisdoms. In the global market, we are told, we must work harder andimprove productivity. The welfare state has become too large and we needto cut back on benefits. Immigration is out of control and borders need to be strengthened.

The choice seems to be either to accept this new paradigm or risk the likes of Marine Le Pen and Geert Wilders gaining power. The centre ground is being dragged to the left and right, and collapsing down the middle. Meanwhile progressive politics has returned to its comfort zone, busily opposing everything and offering almost nothing. Where is the vision, the ambition, the belief?

Yet into this bleak picture drops a book and an author bristling with hope, optimism and answers. Rutger Bregman is a 28-year-old Dutchman whose book, Utopia for Realists, has taken Holland by storm and could yet revitalise progressive thought around the globe. His solutions are quite simple and staunchly set against current trends: we should institute a universal basic income for everyone that covers minimum living expenses say around 12,000 a year; the working week should be shortened to 15 hours; borders should be opened and migrants allowed to move wherever they choose.

If that all sounds like fantasy politics, then Bregman has assembled a wealth of empirical evidence to make his case. Better than that, though, it is not a dry, statistical analysis although he doesnt shy from solid data but a book written with verve, wit and imagination. The effect is charmingly persuasive, even when you cant quite believe what youre reading.

Bregman lives in Utrecht, arguablyHollands most progressive city, where cycling is almost obligatory and motorists are effectively deemed guilty until proven innocent. His house is a few yards from the pretty canal that cuts through the centre of a carefully thought-out town.

Thin, with a pallid complexion and a wispy rumour of a beard, he looks even younger than 28, but he speaks with impressive authority on his subject. Bregman does something very smart and mature in his book. Instead of just attacking capitalism and post-enlightenment liberalism, at the outset he celebrates its achievements. He shows the incredible improvements in life expectancy, health, wealth, education and freedoms that have been achieved in the last couple of centuries.

As for much derided globalisation, he credits it with lifting 700 million Chinese out of extreme poverty hugely more than communism ever achieved. But whereas idealists in the 60s extolled Maoism, regardless of the death and destruction it wrought, no one gets too misty eyed about what the international market has done for China. Why, I ask, are the progressive-minded so reluctant to acknowledge this remarkable turnaround?

I think the big problem on the left, says Bregman, is that it only knows what its against. So its against austerity, against the establishment, against homophobia, against racism. Im not saying Im not against those things, but I think you should be for something. You need to have a new vision of where you want to go.

Bregman has a vision. And its a pretty clear one. But, wait a second. Universal benefit, a 15-hour working week, open borders, really? How?

Ive heard for three years that many of my ideas are unrealistic and unreasonable and that we cant afford them, he says, by way of preamble to a more comprehensive reply. And the simple answer is Oh, you want to stick to the status quo? Hows that been working out?

In Bregmans Holland the status quo has taken quite a bashing of late, and as a result the white-haired Wilders, who wants to stop Muslim immigration and ban the Quran, has emerged as the countrys most powerful politician. The debate in what used to be Europes most tolerant nation has become increasingly toxic. But as bad as that situation is, it still doesnt explain how a universal basic income would be paid for. The first thing we should acknowledge, says Bregman, is that poverty is hugely expensive. It varies from country to country, but most of the time its around 3, 4 or 5% of GDP. If you look at what it would cost just to top up the income of all the poor people in a country, it would cost about 1% of GDP.

Perhaps, but hes talking about paying everyone rich and poor around 12,000 a year. Thats a vast amount of money. How could that be achieved? Youd have to tax the middle class so much that what theyd receive would be wiped out, and then try to tax the very wealthy at a much higher rate which has not proven a successful policy, because the rich are very good at protecting their money.

Bregman gets a little bit vague at this point. He says that even neoliberal economists such as Milton Friedman were keen on universal basic income (UBI), although they tend to call it negative income tax. He also notes that the country that has come closest to implementing a UBI is the US, under President Nixon. It was only because the Democrat-controlled Senate thought Nixon wasnt offering enough money in the basic income that the policy was ditched at the last moment.

He acknowledges that a genuinely universal system would involve a massive overhaul of our tax system and that it would require an enormous amount of public and political support. But youve got to start somewhere, is his outlook, and the best place to start is in redefining what we mean by work.

There was a poll in the UK that showed that 37% of British workers think that their job doesnt need to exist. Well, its not the bin men, and the care workers and the teachers that say that. Were talking about consultants, bankers, accountants, lawyers etc. The implications of that are radical. We could cut the working week by a third and be just as rich. Probably richer!

Well, I say, just because someone doesnt value their job, doesnt mean that it doesnt have value. These things can be part of an invisible network of jobs that keeps everything else going. They cant just be excised like that.

Thats the best we can come up with nowadays? he asks, shocked at my dull pragmatism. People are saying: I feel alienated, I think my job is useless, and the only answer we have for them is No, no, its really useful. You know the invisible hand knows best. Were paying you so much money, it has to be useful!

I say I was thinking more of the film Its a Wonderful Life, which, after all, is about a banker. He thinks his life is worthless and yet we see the depth of his effect on others when his input is stripped away. Anyway, I take his point. We should reconsider much of what society through the inequality of financial payment deems important.

One of the basic lessons of history, says Bregman, is that things can be different. The way weve structured our economy, our system of welfare, its not natural. It could be different.