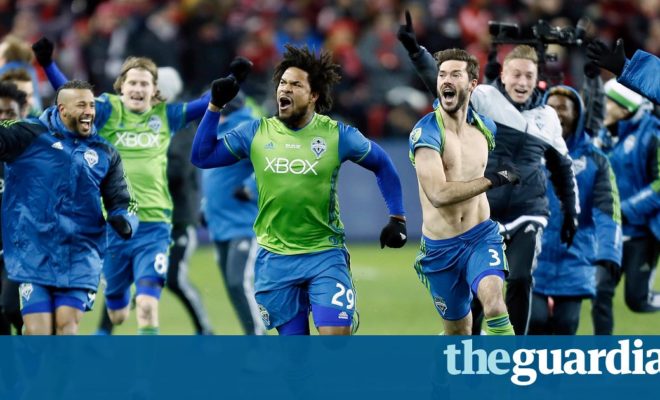 The first MLS Cup final to be goalless after 120 minutes was finally settled by a sudden-death Roman Torres penalty, as Seattle won their first ever MLS Cup on a freezing night at BMO Field.

It was fitting that a symbol of Seattles defensive resolve should score the decisive penalty. For years, Seattle have built a reputation for attacking flair that wilts in the play-offs, but their gutsy charge through the second half of a difficult season has been built as much on defense as attack, and this final was an extreme example of that. Having beaten Sporting KC 1-0 in the play-in game with their only shot on goal, Seattle went one better in the final becoming the only team in MLS history to not have a shot on target for the two hours of regular play.

Torontos goalkeeper Clint Irwin was more concerned about hypothermia than shots for most of that period, but while he did make one penalty save in the shootout, it was his counterpart Stefan Frei, whod made nine saves throughout his teams rearguard action, who would be celebrating at the end of the game. Frei had kept his team in the match with a diving fingertip save from a Jozy Altidore header in the second period of extra time and would also save a weak Michael Bradley penalty in the shootout to cap an eventful personal evening.

Two hours earlier, Greg Vanney had seemed to signal Torontos attacking intent from the start, by shifting back to the line up that had started in the first leg in Montreal, with Michael Bradley the sole outright protector of the defense, and the attack-minded Jonathan Osorio back in the side at the expense of Will Johnson.

The hosts duly started the game in a proactive mood, with an early scuffed shot from Altidore drifting just past Freis far post, to sound an early warning. It was followed by a sequence of Toronto corners, as Vanneys team tried to immediately ignite the enthusiasm of the 36,045 capacity crowd.

Not that they needed much encouragement. The game had sold out in three minutes, and with Toronto having waited a decade to even host a play-off game, let alone a final they were playing in, this postseason run had seen the atmosphere in their three home games build to a crescendo before this game started. And not even the freezing temperatures (23F at field level for kick off, with wind chill off Lake Ontario making it feel more like 10F) could suppress the home crowd.

Seattle did their best to stop momentum building on the field though, first by slowing the game with fouls, and then by trying to find their way into it with quick transitions to try and get Jordan Morris running at Erik Zavaleta. Zavaleta is notionally the weakest part of the Toronto back three, though it was hard to guess during the early running as he held his ground against the young US international.

Toronto were the more threatening team in the first half. Other than some hopeful flicks forward by the busy Valdez, Seattle were not making a lot of clear chances, while Toronto were doing a lot of decent work in Seattles half, without forcing many clear chances of their own, or doing much with the ones they did make.

Altidore had scored in every play-off round coming into the final, but looked a less sure presence in the first half, passing up a few decent chances, including a back post header at the half hour mark. Frei fumbled it, and took two touches to claim the ball, but Altidore should have done better.

He remained determined, though, and nearly helped open the scoring early in the second half as he forced Alonso off the ball on the edge of the box, to allow Osorio to poke the ball to the right for an overlapping Sebastian Giovinco to have a free shot. He hit it fiercely but it sliced just wide of the post to ripple the side netting.

With the game at 0-0 going past the hour it might have been understandable for Toronto to tighten up, in anticipation of Seattles customary habit of late and telling goals. But the hosts kept probing, looking for a telling pass, and high up in the main stand Seattles 2000 strong contingent of traveling fans looked anxious rather than expectant at that stage, especially when Valdez limped out of the game in the 73rd minute, to be replaced by Ivanschitz.

It burned another substitution for Seattle, whod already replaced the injured Friberg with Alvaro Fernandez. Some version of these changes might have been coming anyway, as Schmetzer reshuffled his attack to push Morris up to center forward, but the circumstances were hardly ideal.

For their part, Toronto brought on Johnson and Benoit Cheyrou for Osorio and Cooper, as Vanney anticipated the attrition of extra-time, and possibly another decisive interception from Cheyrou, who had scored the winner against Montreal after just 92 seconds on the field.

No such immediate return this time round, though there was still time for one more of the heroes against Montreal to have a chance to make a difference. In the 92nd minute Nick Hagglund got up to head an outswinging Michael Bradley corner goalward, and a lunging Altidore was inches from connecting decisively as Frei scramble to cover.

Extra-time had more grit than grace, as it became clear that a single chance would probably be enough to win an engrossing but never wide open game. Toronto kept pushing forward, Seattle kept clearing their lines, inelegantly but mostly effectively.
In the final 15 minutes, the tension mounted as the game got more ragged, and both teams had chances, though the best fell to Toronto. Ricketts screwed a shot just wide from near the penalty spot after a clearance fell right to him, and then Altidore forced that brilliant full stretch save from Frei, as his looping header across goal looked bound to drop in.

In between those chances Seattles veteran utility man Brad Evans had come on for a cramping JMorris, as both teams limped towards penalties Giovinco had already seen his flickering performance ended by injury at the end of the first period of extra time. Now there were players visibly cramping or clutching hamstrings all over the field in the dying minutes, but all the substitutes had been used. And finally, there was no more running, just the long walk to the spot.

After five penalties, the teams were level at 4-4. Sudden death, and Justin Morrows penalty cracked back off the underside of the bar. Up came Torres, with a no-nonsense short run up and finish. The Sounders may not have been pretty, but they were finally the champions.