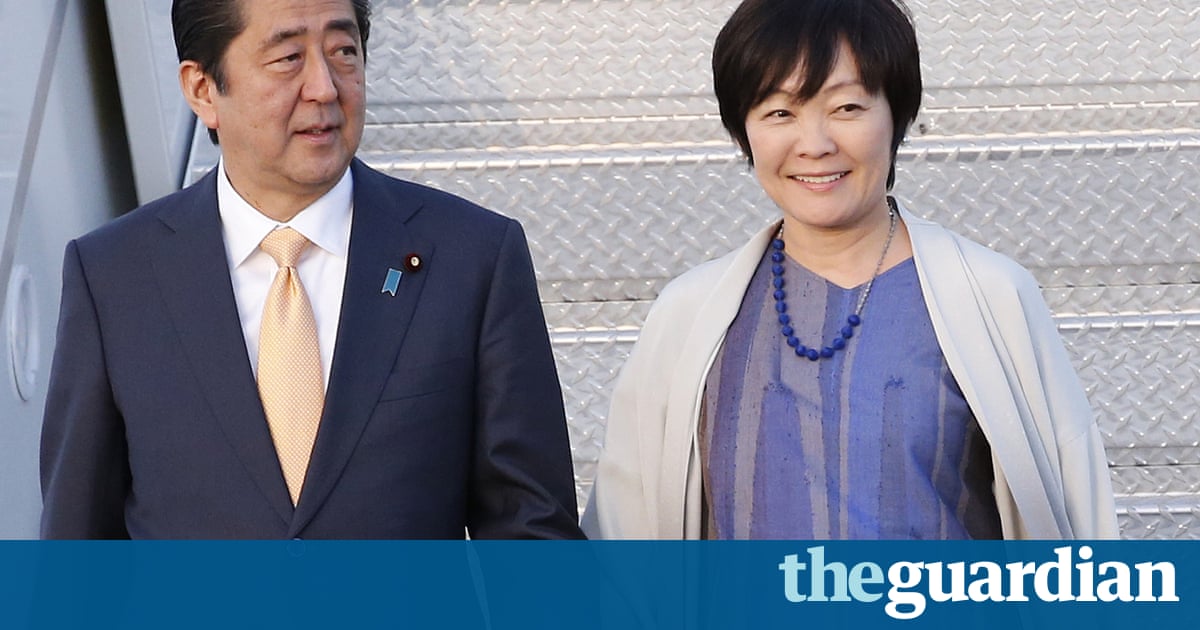 Japans prime minister, Shinzo Abe, and his wife, Akie, have attempted to distance themselves from an ultra-nationalist educational institution mired in allegations of racism and a sweetheart land deal.

Akie Abes links to Moritomo Gakuen, a private kindergarten in Osaka, have come under scrutiny after the media reported that the preschool had bought state-owned land at a seventh of its listed price for a primary school it plans to open in April. She stepped down as honorary principal of the primary school on Friday, soon after it had removed her message of support from its website.

In the message, she endorsed the schools attempts to foster national pride through moral education an approach that harks back to pre-war militarism adding that she had been impressed by the passion shown by the Moritomo president, Yasunori Kagoike.

The issue has dominated parliamentary debate this week, with opposition MPs demanding an explanation as to why the school was allowed to buy land at such a low price.

Shinzo Abe said he had protested against the use of his name when Moritomo was seeking donations for the Abe Shinzo memorial primary school. It has since decided to call itself the Mizuho no Kuni meaning land of rice primary school.

He said his wife had decided to step down after the couple discussed the controversy, adding that she had been left with no choice but to accept the role of honorary principal after her appointment was announced in front of parents.

Despite this, she decided that it would be detrimental for both the students and the parents if she continued and so she told them she would resign, Abe told a parliamentary committee on Friday. It is true that she was on the website as honorary principal but at her request, this was removed.

He denied that either of them had played any role in helping Moritomo gain approval to purchase government-owned land for below its listed price. He has offered to resign if proof of his involvement is produced.

Moritomos curriculum is designed to instil patriotism in its pupils, who are required to bow before portraits of members of the imperial family and go on field trips to military bases. Children aged between three and five sing the national anthem every morning and memorise the 1890 imperial rescript on education (pdf), which demands loyalty to the emperor and sacrifice for ones country. The US occupation authorities banned the rescript, believing it had fuelled pre-war militarism.

Kagoike is the Osaka branch leader of Nippon Kaigi, an ultra-conservative lobby group whose members include Shinzo Abe and more than a dozen members of his cabinet. The group wants to rebuild the military, claims that Japan liberated east Asia from western colonialism during the war, and that the US-authored post-war constitution has emasculated the countrys true, original characteristics.

Japanese media recently revealed that Moritomo had bought the 8,770 sq metre plot of government-owned land for 134m yen (950,00), 14% of its appraisal price. Government officials claim the deduction was made to factor in the cost of cleaning up industrial waste on the site.

Earlier this month, Osaka officials questioned Kagoike after the kindergarten sent a letter to parents that denigrated Chinese people and Korean residents of Japan for which it later apologised.

Kagoike has denied any wrongdoing in the land purchase. I havent done anything wrong, he said in a radio interview. Instead, he blamed the non-conservative media for attempting to crush our plans for a school that respects history and tradition.

Akie Abes connections to Moritomo run deeper than her short-lived role as honorary principal. Footage of a visit she made to its sister kindergarten in 2015 shows her telling parents: My husband also thinks that education policy here is excellent.

She has won plaudits for appearing to support liberal causes, having attended the Tokyo rainbow pride event in 2014 and spoken of her admiration for South Korean culture.

She has also questioned the governments decision to build hundreds of miles of concrete sea walls to protect the coastline against tsunamis.

Simon
← Previous Story ‘Grey wall of China’: the town at the frontline of a looming ageing crisis
Next Story → Trump accuses China of being ‘grand champions’ of currency manipulation