Size matters: the evolution of the NBA big man

A new generation of seven-footers has shifted the balance of power in the NBA from the shorter guys but are these changes good for the game? 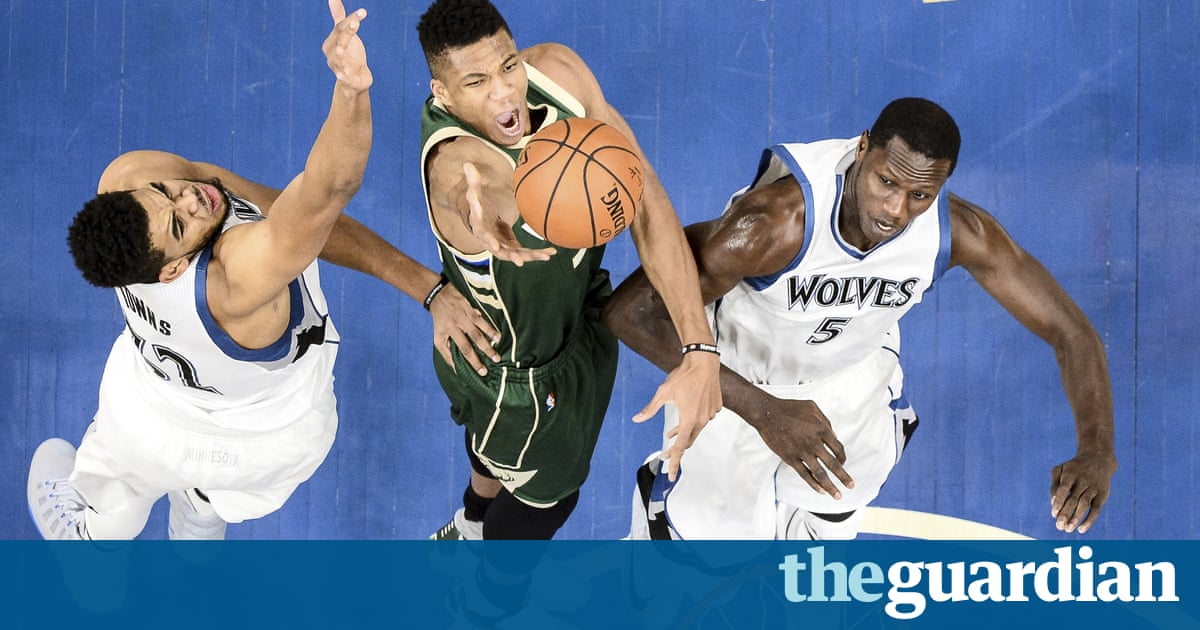 Last week, late in the first quarter of an NBA game in Detroit, Michigan, Myles Turner, the Indiana Pacerss 20-year-old 6ft 11in center, popped out to the top of the three-point line and hit a 25ft jump shot with an arc so high the cameraman had to raise the viewing angle to follow it. Less than a minute later, he hit another one from the same spot. Both shots were so smooth that neither of them even skimmed the rim. The field goals were no anomaly. Turner is shooting 41% from the three-point line, well above the league average of 35%.

More than a thousand miles west in Denver, Colorado, Nikola Jokic, the Denver Nuggets 21-year-old 6ft 10in center, stood with his back to the basket, 15ft away, and threw a no-look, over-the-shoulder pass to a cutting team-mate for a wide-open lay-up. The pass, more common in a Harlem Globetrotters game than an NBA one, was nothing new for Jokic. A three-minute YouTube compilation posted to the site last month highlights dozens of them. Jokic actually has some flair, said former NBA coach George Karl, whose memoir about his life in basketball, Furious George, was published this week. He throws some balls that only guards think about throwing.

Turner and Jokic, who both play Thursday at the O2 Arena in London when the Pacers and the Nuggets face off in the NBAs only game in the UK this season, are their teams representatives of a new generation of NBA big men, all roughly 7ft tall, who, to varying degrees of competency, can shoot three-pointers, pass, and dribble, a collective set of skills that has historically been the province of only guards. Their recent emergence, a result of the evolution of the NBA game, has become so widespread that its shifting the balance of power in the league from players several inches shorter, who have largely been the sports marquee names for the last several decades, to the tallest the game has to offer.

The New Orleans Pelicans Anthony Davis, 23, is considered the cream of this crop of players, but Giannis Antetokounmpo, 22, of the Milwaukee Bucks, has emerged this season as a rival candidate for the future face of the league, once LeBron James and Stephen Curry retreat from prominence. The New York Knickss 21-year-old Latvian star, Kristaps Porzingis, is another of these potential stars, as is the Minnesota Timberwolvess Karl-Anthony Towns, 21, the Philadelphia 76erss Joel Embiid, 22, and the Sacramento Kingss DeMarcus Cousins, who, at 26, is an old man among his peers.

Center until recently the only position a 7ft tall person would ever play produced the first nationally recognized legends of the NBA in the 1960s. These were its tallest players who could dictate the flow of a game both offensively and defensively by dominating the area several feet around the basket, such as Wilt Chamberlain, Bill Russell, and, later, Kareem Abdul-Jabbar.

But with the rise of the point guard Magic Johnson, the small forward Larry Bird, and the shooting guard Michael Jordan in the 1980s and 1990s, the center became less of the focal point of NBA teams, until the position reached a nadir about a decade ago. By the end of Shaquille ONeals peak years in the mid-2000s, it seemed that the only requirement to play the position in the league was to be a 7ft blob of humanity, said Scott Hastings, the Nuggets television analyst and a former center himself, when I spoke to him by phone last week. No disrespect intended, but when youve got guys like [current Charlotte Hornets seven-footer] Roy Hibbert making all-star games at the center position [as he did for the Indiana Pacers in 2012 and 2014], the center position is almost dead.

In the early 2000s, the Dallas Mavericks Dirk Nowitzki emerged as the first seven-footer to be a dominant offensive player both close to the basket as well as from three-point range. Additionally, Nowitzki was skilled enough as a ball handler that he could effectively score on drives to the basket. He was the original prototype of the generation of big men that is emerging now. What made Nowitzki so revolutionary was that his offensive versatility created significant match-up problems for the opposing defense.

Spacing is so important in the game, Karl said by phone from Denver last week. Anytime that your center can bring [the other teams center] away from the basket where he has to defend is incredibly important to the spacing that you put on the court.

Larry Bird, now the Pacerss president of basketball operations, said from Indiana in a telephone interview last week: When the bigs stretch out there, youve got to guard them [with your bigs] and theres nobody protecting the rim. Its easier for these guards to get a cleaner shot at the basket.

Yet Nowitzki proved to be ahead of his time. Many players were drafted in his image, but none had the same impact. (Italys Andrea Bargnani was the most successful, but since he fell far short of Nowitzkis mark he was also the most ridiculed.) Meanwhile, an NBA rule change in 2004 that outlawed hand-checking above the foul line further weighted the game in favor of the smaller player. It allowed ball handlers, most often guards, to be more aggressive offensively. In hindsight, the most significant effect was that three-point-shot attempts, which had plateaued for several years prior to the rule change, began to increase. In 2004, the average number of three-point shots attempted by a team was 15 per game. This season it is 27.

Not long ago we were worried about the court being too small for these players, and there was talk about widening the lane and some people were even talking about widening the whole court, Bird said. But the three-point shot has changed everything.

Last year, the Golden State Warriors, who lost in the NBA finals, led the league in three-point shots made, at an average of 13 per game, which is an NBA record. The Cleveland Cavaliers, the team that beat the Warriors in the championship, made the second-most. Not surprisingly, most NBA teams have followed suit. The increase in three-point shots attempted this season over last (from an average of 24 per game to 27) is the largest single-season increase since 1994, when the NBA shortened the distance of the shot. (In 1997, the three-point line was extended back to its current dimensions.)

Out of a necessity for survival, NBA big men have had to adapt to the little mans game. As more players throughout the league shoot three-pointers, more centers do now as well. When Karl coached the Sacramento Kings last year, he was responsible for Cousins incorporating the shot into his game, after Cousins had hardly attempted any at all in his first four years in the league. Cousins now shoots five per game and makes a very respectable 37% of them. This season, even the last of the old-school centers, the Brooklyn Nets Brook Lopez and the Memphis Grizzlies Marc Gasol, have begun to shoot three pointers. (Lopez is hitting 36% of his; Gasol makes 41%.)

What makes the new generation of seven-footers so unique is that they have taken the adaptation process one step further: many of them have ball-handling skills that rival, if not surpass, Nowitzkis. When parked at the three-point line, they dont have to settle for a jump shot. Like a guard, they can drive to the basket as well.

The two best shots in basketball are the lay-up and the three-point shot, Karl said. And big guys are now becoming a very common proponent of both.

Yet with such dramatic developments in the game offensively come dramatic adjustments necessary defensively. And, as former NBA coach Jeff Van Gundy, now a basketball analyst for ESPN, observed in a telephone interview last week, most of the new wave of seven-footers mentioned above are on teams with losing records. What goes directly into winning that everybody overlooks is the impact of having enough defensive skill and mentality on the floor to complement the offensive skill, Van Gundy said, and how important it is, particularly talking about those guys as best players, that they exert as much energy into their defense as they do into their offense.

Van Gundy continued: Defense for a center today is harder than its ever been. What is being asked of these seven-footers is not low-post defense any more as much as it is transition and pick-and-roll defense, and being able to close to the three-point line and have good enough feet to be able to guard the dribble.

The game changes about every 10 to 15 years, Bird said. Its changing now, though not all of the changes may be for the best. The game is becoming very homogenous, Van Gundy said. Theres less differences in style of play Youre going to continue to see less and less low-post play.

How the NBA reacts to these changes will determine the direction the game takes in coming years. For now, its produced a generation of seven-footers who have redefined what an NBA center is yet again.