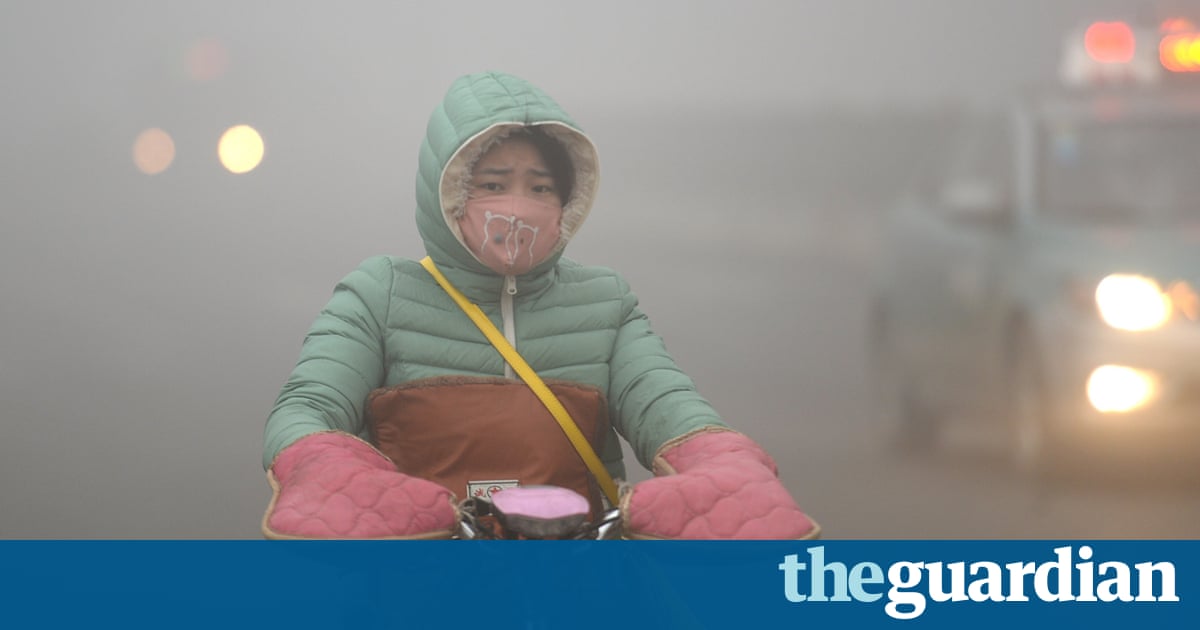 Tens of thousands of smog refugees have reportedly fled Chinas pollution-stricken north after the country was hit by its latest airpocalyse forcing almost half a billion people to live under a blanket of toxic fumes.

Huge swaths of north and central China have been living under a pollution red alert since last Friday when a dangerous cocktail of pollutants transformed the skies into a yellow and charcoal-tinted haze.

Greenpeace claimed the calamity had affected a population equivalent to those of the United States, Canada and Mexico combined with some 460m people having to breathe either hazardous pollution or heavy levels of smog in recent days.

Lauri Myllyvirta, a Beijing-based Greenpeace activist who has been chronicling the red alert on Twitter, said that in an attempt to shield his lungs he was avoiding going outside and using two air purifiers and an industrial grade dust mask that makes me look like Darth Vader.

You just try to insulate yourself from the air as much as possible, said Myllyvirta, a coal and air pollution expert.

Others have simply opted to flee.

According to reports in the Chinese media, flights to some pollution-free regions have been packed as a result of the smog.

Ctrip, Chinas leading online travel agent, said it expected 150,000 travellers to head abroad this month in a bid to outrun the smog. Top destinations include Australia, Indonesia, Japan and the Maldives.

Jiang Aoshuang, one of Beijings smog refugees, told the state-run Global Times she had skipped town with her husband and 10-year-old son in order to spare their lungs.

Jiangs family made for Chongli, a smog-free ski resort about three hours north-west of the capital, only to find it packed with other fugitives seeking sanctuary from the pollution.

It really felt like a refugee camp, she was quoted as saying.

Yang Xinglin, who also fled to Chongli, said she had requested time off from her job at a state-owned real estate firm so she did not have to inhale the smog.

You ask me why I left Beijing? Its because I want to live, Yang, 27, told the Guardian.

Emma Zhang, a third smog refugee, told the South China Morning Post she and her young son had swapped their home in the western city of Chengdu, which has also been blighted by severe pollution, for a hotel in the temperate south-western province of Yunnan.

I finally saw the blue sky. It was wonderful! she said.

Li Dongke, a 27-year-old Beijinger, said her entire family had decamped to Kunming, capital of Yunnan province, or the tropical island of Hainan in the South China Sea. Its terrible, she complained of the current pollution crisis.

Fleeing the danger zone has not been completely straightforward for Chinas environmental exiles.

The China Daily reported that smog had paralysed airports in Beijing and across the countrys northern industrial heartland in cities such as Tianjin and Shijiazhuang, making escape impossible.

Myllyvirta, the Greenpeace activist, said his group had been warning of a winter smog crisis since July when it began noticing the government was pumping economic stimulus into heavily-polluting industries such as cement and steel.

A big part of what happened is that the steel price went up when the government started a huge wave of construction projects to stimulate the economy, he said.

One consequence was that a large number of smaller, poorly-regulated steel producers had gone on a tear leading to increased emissions that were now blackening the skies over northern China.

Myllyvirta said he was convinced the future looked brighter for Chinas environment, despite its latest airpocalypse.

A fall in the use of coal and air pollution were likely over the next three to five years as more urgent steps were taken to restructure the economy and preserve the environment.

For now, however, some locals saw temporary or permanent exile as their only option while many outsiders refused to come at all.

People are definitely thinking about how to get out and companies are complaining that it is hard to recruit talent [to come to China], Myllyvirta said.