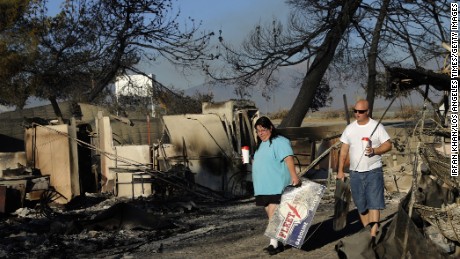 (CNN)Cecil Stephens sadly looked over the charred remains of the Summit Inn. The Southern California restaurant, once frequented by Elvis Presley, had fallen victim to the Blue Cut wildfire.

“It makes me sick in my stomach,” said Stephens, who owned the place for decades. “It’s awful, ’cause I know every button in that restaurant that was there, every light switch, every pipe. After 50 years, you’ve had to repair half of that stuff.”
The fire was sparked Tuesday in San Bernardino County and spread to 37,000 acres by Friday, destroying at least 96 single-family homes and 213 outbuildings, fire officials said.
Stephens said he bought the Summit Inn on a Friday the 13th in 1966 and ran it for 41 years with his wife, Debbie. Classic car buffs frequented the place off Route 66, as did nostalgia fans and a few movie stars like Presley and Clint Eastwood.

Stephens recalled that Presley noticed the jukebox didn’t carry any of his records, so he kicked it lightly and jokingly warned that he wanted to see one next time he stopped by. With a chuckle, Stephens said he went right out and bought a record by The King.
Stephens sold the Summit Inn about a month ago to Katherine Juarez. She said she has the insurance and plans to rebuild but replicating its original splendor with memorabilia will be expensive. A GoFundMe account has been started.
Right next door, fire also razed the small house where Summit Inn manager Michelle Keeney lived with her husband, Scott.
“It’s just so sad for all of us who worked at the Inn and our customers. We were like family,” she said, searching blackened clumps in the wreckage for anything salvageable.
“Look — a Route 66 pin,” she cried holding up a seared memento.

About 34,500 structures remain threatened in the communities of Oak Hills, Phelan, Lytle Creek, Baldy Mesa, West Cajon Valley, South Hesperia and Summit Valley, fire officials said.
The number of destroyed houses will probably grow because some damaged buildings haven’t been assessed yet, they said.
CalFire tweeted Friday that the blaze is now about 40% contained — a big improvement over a few days ago.
Veteran fire officials said property loss in the area could have been much worse had they not deployed as many firefighters and equipment early in the battle.
More than 1,500 fire personnel are on the scene, along with 178 engines, 12 air tankers and 17 helicopters, according to the InciWeb fire information site.
In the scorched high desert, while scores of homes were destroyed, countless others stood intact within the now-ashy fire zone.
The surviving houses, many on acre lots or more, were often completely ringed by blackened ground and vegetation — clear signs that fire crews’ structure protection efforts worked.
“A lot of the structures that burned were outbuildings like sheds and barns,” said Eric Sherwin, a spokesman for the San Bernardino fire department. “The fire just moved too fast to save them all.”