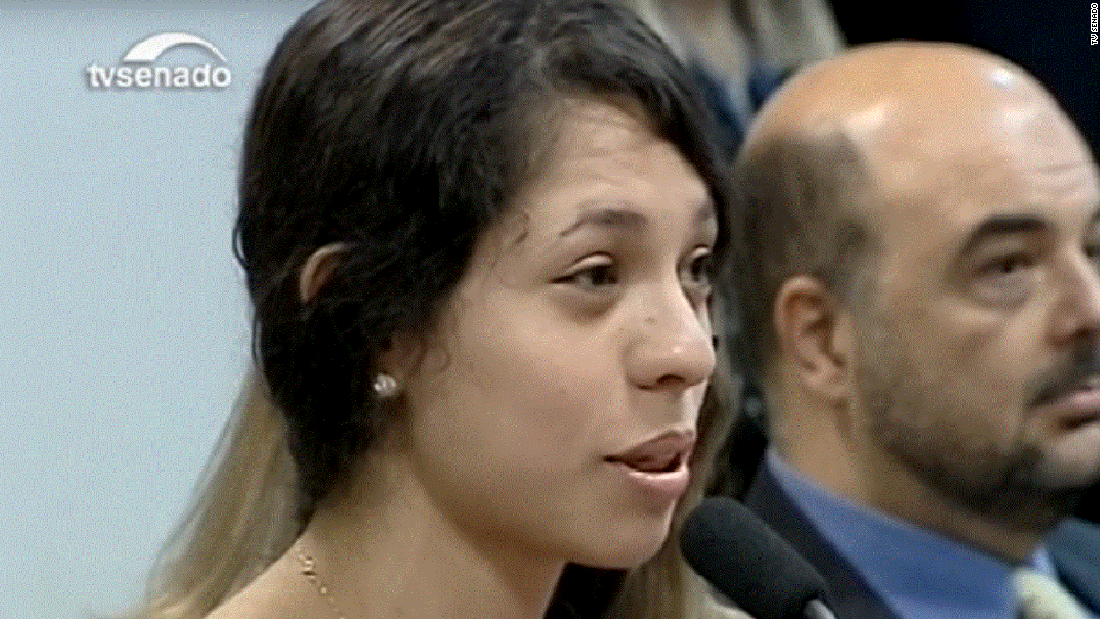 (CNN)A soft-spoken teenage girl has become the voice of a frustrated generation of Brazilian high school students after a video of her speaking to legislators in her home state of Parana became a viral sensation.

Sixteen-year-old Ana Julia Ribeiro turned into a household name overnight after testifying before the legislative assembly in Curitiba and defending the student-led movement that has occupied hundreds of state schools since October 14.
She has also drawn comparisons to Malala Yousafzai, the Pakistani activist and youngest recipient of the Nobel Peace Prize who fought for equal access to education for girls in Taliban-controlled regions.
“To whom do these schools belong?” Ribeiro asked, with a slight tremble in her voice, at the beginning of her 10-minute speech. “This is our country, it will be the country of my children and the children of my children and I am concerned about the future.”
The students are protesting a provisional measure that would change the high school curriculum in public schools throughout the country. It would make classes like art and physical education optional and increase class time.
The students also are against a proposed constitutional amendment, known as PEC 241, drafted by President Michel Temer, that would cap government spending for 20 years to reduce budget deficits and pay the country’s debt.
“We can’t just sit back with our arms crossed,” Ribeiro said. “We know that we need a reform in high school education and the educational system as a whole, but we need a reform that has been debated and discussed and promoted by education professionals.”
In Parana, 850 of the state’s 2,100 public schools were seized by the student movements this month. Lawmakers accused the students of being influenced by leftist leaders who opposed the Temer government, which took office after former President Dilma Rousseff was impeached in August.
“This isn’t a game for us, we know what we are fighting for. Our flag is education, our only flag is education,” Ribeiro said. “We are a nonpartisan movement. We are a student movement for the students.”
Her speech drew a loud roar of applause from sympathizers in the assembly audience and a scolding from its president, who threatened to suspend the session, when she accused lawmakers of “having blood on their hands” after the death of fellow student Lucas Mota in one of the occupied schools.
“I went to Lucas’ funeral yesterday and I don’t remember seeing any of the faces there that I am seeing today. Not one,” Ribeiro said. “Lucas’ blood is on your hands. You represent the state.”
While the Mota incident was isolated and unrelated to the protest movement, Ribeiro took advantage of her time at the lectern to challenge the representatives as they chastised her for her “insults.”
“I apologize, but the Statute of the Child and Adolescent says that society, the family and the state are the ones responsible for the well-being of this country’s youth and for its students.”
According to the Ministry of Education, 315 schools are still occupied by the student movements.
Ribeiro traveled to Brasilia earlier this week and participated in a debate on the disputed constitutional amendment at a senate human rights commission meeting. The amendment, which was approved by the lower house, will be debated on the senate floor this month and is expected to be called to a vote on November 29.
Related ItemsTeen gives voice to Brazilian student protest movement - CNN.comworld

Simon
← Previous Story Exhausted Mother Snaps A Photo Of Her Burned-Out 7-Year-Old, Then She Wins The Costume Contest
Next Story → Man In Middle Seat Is Fed Up With Rude Armrest Hog Beside Him, Then Films Hilarious Revenge