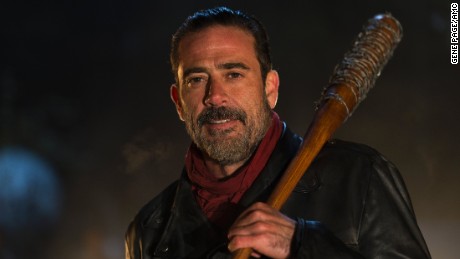 (CNN)Warning: This post contains comic book spoilers about “The Walking Dead,” as well as an embedded video that shows graphic content.

The first look at ‘The Walking Dead’ Season 7 is a bloody, tense, anxiety-inducing three-minute clip that could hint at the identity of villainous Negan’s victim and another horrific development to come.
The clip, which rolled at the end of a panel held for the show during New York Comic-Con, begins just seconds after the brutal beating shown in the Season 6 finale that will claim one of the members of Rick Grimes’ (Andrew Lincoln) crew.
The sneak peek, of course, did not reveal the person’s identity. Instead, it shows Negan (Jeffrey Dean Morgan) taunting a traumatized and blood-splattered Rick.
“I’m going to kill you,” Rick whispers in the video. “Not today. Not tomorrow. But I’m going to kill you.”
Negan is displeased with Rick’s tone and proceeds to ask his fellow Savior Simon for the weapon Rick was carrying — a hatchet.
“Simon is my right hand man — having one of those is important,” Negan says. “I mean, what do you have left without them?”
RELATED: ‘The Walking Dead’: Season 7 trailer
After a little more ridiculing, Negan drags Rick roughly to the trailer by the collar of his jacket, wielding Rick’s ax in the other hand.
“I’ll be right back — maybe Rick will be with me,” Negan says.
The crowd at Comic-Con erupted in shrieks as the clip came to a close.
Since its start, “The Walking Dead” has often taken key moments from the comic books and placed them into different points in the TV show’s timeline. In the comics, Rick loses his hand in a confrontation with The Governor, a character who appeared last in Season 4.
Many fans have taken the clip to be a hint that Rick could be losing his hand in the premiere.
The video has also sent internet detectives into a tailspin — with many claiming to have solved the mystery that has plagued fans for months.
Some say Negan’s reference to “right hand man” implied the victim is male. Others say the blood on Rick’s face indicates Negan’s victim was directly to the right of Rick. In some cases, fans are working to find reasons to eliminate their own favorite characters from the list of possibilities.
Whatever the outcome, the actors were clear about one thing: Filming the scene was not easy.
“I hated shooting all of that,” said Norman Reedus, who plays Daryl. “I was miserable.”
Lauren Cohan, who plays Maggie, said the death is “unexpected, destabilizing and jarring in a bigger way than we ever had.”
Director Greg Nicotero, meanwhile, put the focus on the aftermath.
“There’s some unbelievable moments and unbelievable performances that come out of the fog and the haze and the post traumatic stress of the actual moment that I think really set the stage for the entire season,” he said.
“The Walking Dead” premieres October 23 on AMC. A live 90-minute episode of the after show ‘The Talking Dead” airs immediately after.