Trump golf resort and Scottish planners clash over the environment 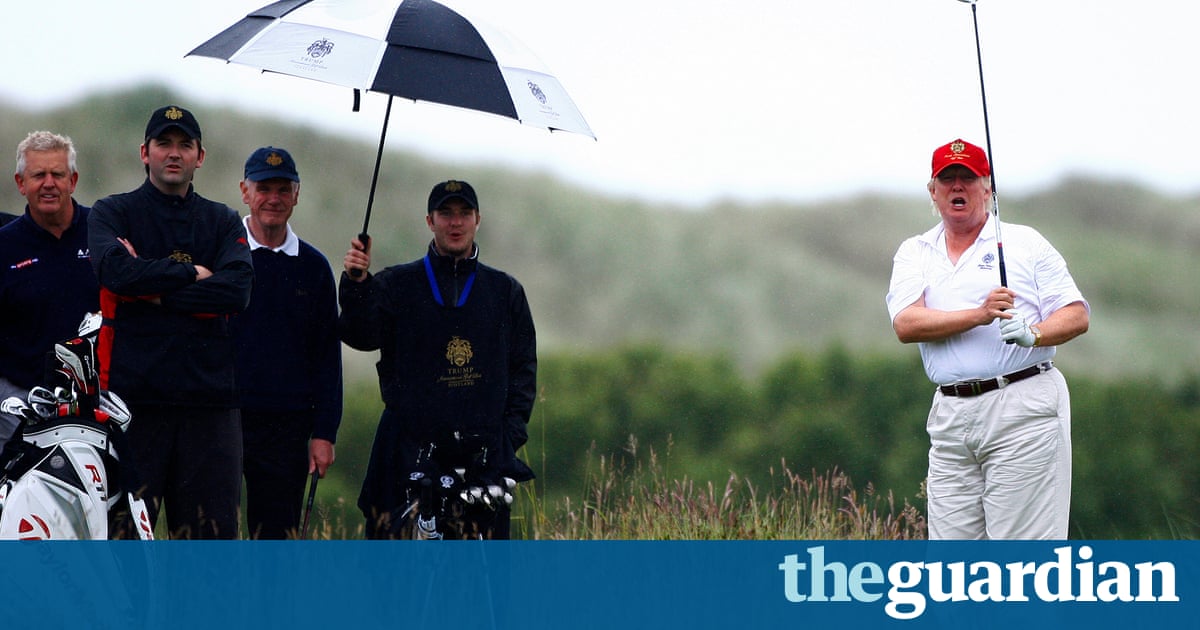 The Trump Organization is facing a new battle with Scottish planners and conservationists over the protection of rare dunes and wildlife at its Aberdeenshire golf resort.

Trump International Golf Course Scotland has challenged a key part of the planning permission it won for the resort in 2008 as it pushes ahead with plans for a second 18-hole golf course and an extension to its boutique hotel.

The company, now being run by Donald Trumps son Eric, applied to Aberdeenshire council last week to discharge clauses in its planning permission which require it to run an environmental advisory group to oversee construction across the rare, legally protected dune system used for the course.

To the alarm of conservationists, it wants to replace the group, which Trump unilaterally closed down in 2013, with annual environmental inspections for the next three years.

In January, the president signalled a fresh offensive against out of control environmental regulations in the US as he offered to cut pollution controls on the car industry, while declaring he was to a large extent an environmentalist who had won awards.

The proposal risks putting the Trump Organization into conflict with Scottish government planning inspectors who ruled in December that robust environmental monitoring of any new building was needed at the resort.

Insisting Trump follow the 2008 master plan in full, the inspectors said the site was environmentally sensitive and part of a legally protected site of special scientific interest (SSSI). They said ecological monitoring may need to be strengthened.

The inspectors also objected to Aberdeenshires proposals to include Trumps latest plan to build 850 private homes and 1,900 leisure accommodation units because that new scheme was too dissimilar to the plans approved in 2008.

They said the Trump Organization should stick to the original plan, requiring the US company to pay for a primary school and affordable homes if it tries to build a timeshare complex and private housing estate. Aberdeenshire council is expected to accept the inspectors recommendations on Thursday 9 March.

The Menie Environmental Monitoring Advisory Group (Memag), named after the estate where the resort is based, was originally proposed by Trumps advisers to placate environmental groups and the government conservation agency Scottish Natural Heritage (SNH).

Ecologists objected strenuously to the resort because it involved bulldozing large parts of one of Scotlands rarest coastal dune habitats protected by the Foveran Links SSSI mentioned by planning inspectors.

Those objections played a large part in forcing Scottish ministers, who publicly backed Trumps plans, to put the resort application to a formal planning inquiry. It approved the plans in 2008 partly on condition that SNH and the Scottish Environment Protection Agency, the countrys water and air pollution watchdog, had seats on Memag.

To the alarm of environment groups, the Trump Organization has since allowed Memag to lapse. It last met in January 2013. After that point, the Trump organisation said it had fulfilled its purpose and been closed down. Aberdeenshire failed to take any action to force Trump to keep it running.

TIGCS has now written to the council saying it had carried out an internal review which found no evidence Memag added value to the monitoring work by council officials now that its first golf course had been built.

Even though it originally proposed setting it up, its report to the council said the review had decided it was an unnecessary and disproportionate development management tool in the context of this development.

There are no known examples of a Memag mechanism elsewhere in Scotland in relation to golf course maintenance and operation.

James Reynolds, of the Royal Society for the Protection of Birds Scotland, said they were not surprised. The Trump Organizations environmental commitments never seemed like anything more than greenwash at the time of application, in a cynical bid to secure consent for the golf development, he said.

It should not be forgotten that the irreversible environmental damage to this nationally important site of special scientific interest was justified by the then Scottish government due to its supposed national benefits for the economy, jobs and more. But now, with the promise of those myriad national benefits open to doubt, it begs the question was it worth it?

Debra Storr, an ex-councillor who voted against the original planning application, said attempts to remove Memag from the planning approval should be opposed.

I believe it was actively undermined by the Trump Organization and the council was negligent in permitting this, she said. The formal abandonment of Memag would send a further signal to Trump that he may trample the environment with impunity.

Simon
← Previous Story Sunny Pawar in Lion: He was just a normal boy; now a Hollywood star lives in our area
Next Story → Erdoan accuses Germany of ‘Nazi practices’ over blocked political rallies