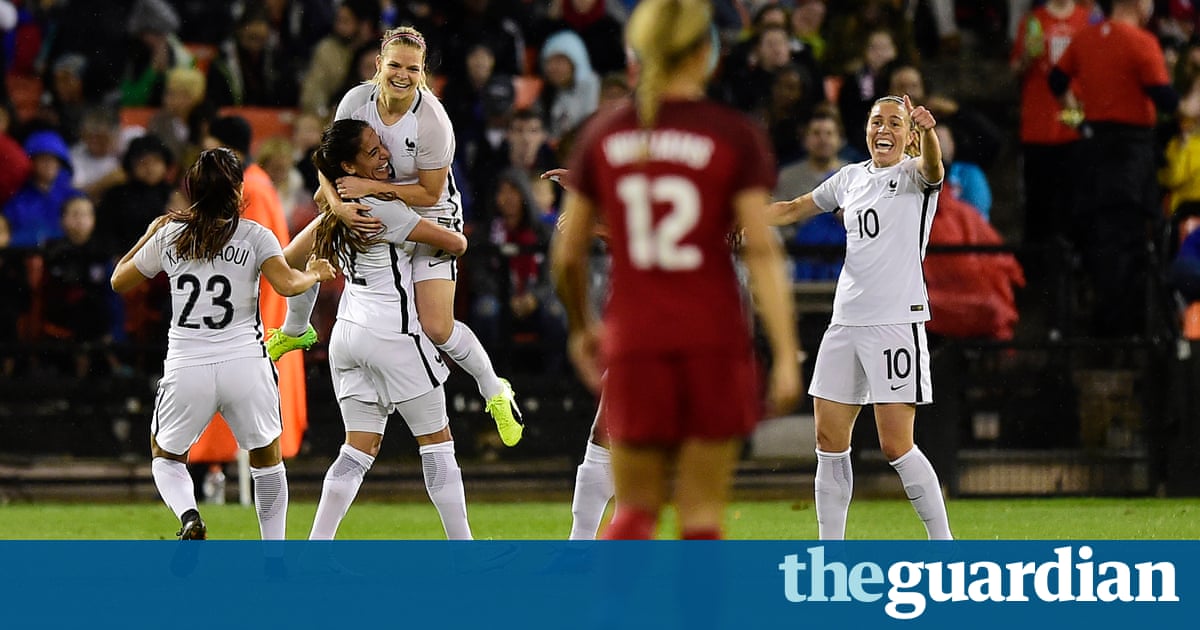 Thats the lesson from the SheBelieves Cup, in which the US womens national team discovered two things:

1) Fans are willing to turn out and cheer in miserable weather, even when US coach Jill Ellis is experimenting with the lineup. Longtime fan favorites like Hope Solo and Megan Rapinoe were not with the team in the Cup. Abby Wambach viewed Tuesdays game from the stands. Alex Morgan and Crystal Dunn didnt start.

2) Good teams have the tactical and technical knowledge to tear apart the USA on a bad night.

Thats what happened Tuesday night in aging RFK Stadium. The upper deck, usually reserved these days for exotic flora and fauna, had fans seeking relief from the rain under the roof that covers the top rows.

And France routed the USA, scoring two early goals and coasting to a 3-0 win, the Americans most lopsided defeat since a 4-0 loss to Brazil in the 2007 World Cup semi-finals.

But on the field and in the stands, the US team stressed the positive.

The turnout has been wonderful, said defender Becky Sauerbrunn. We got to play new players in a different formation. Its a down year (no Olympics or World Cup), were prepping for 2019, so were experimenting. It didnt go our way tonight, but you learn from your mistakes and just grow.

The different formation is Ellis 3-5-2, a departure from the days of Sauerbrunn and Julie Johnston forming a formidable central defensive wall. Sauerbrunn played Tuesday night at outside back, only to find herself on multiple occasions scrambling toward the middle when her teammates were beaten.

The three-back formation held steady against Germany and for most of the game against England, until second-half substitutes got confused on a late scramble in the box and conceded a goal. On Tuesday, France came after the three backs from the opening whistle, turning the game into a fast-paced 3v3 matchup.

They put three pacey players across the back line, Ellis said. This was as direct as Ive seen them play. After the first 10 minutes, I thought we settled in a little bit.

And they did. Defender Casey Short looked green in the first few minutes, struggling to cope with the streaking Elodie Thomis, but she started winning the battles later in the half.

Yet the problems in the first few minutes werent just at the back. The midfield trio longtime fixture Carli Lloyd, young but experienced Morgan Brian and inexperienced international Samantha Mewis failed to connect on passes, spraying the ball out of play or turning it over.

France quickly converted those turnovers into chances, sending the ball forward to Eugenie Le Sommer. Goalkeeper Alyssa Naeher had little option but to haul her down, getting a yellow card and conceding a penalty that Camille Abily calmly slotted home.

Le Sommer struck again a minute later, racing past defenders and turning to fire an unstoppable shot past Naeher.

Theres always risk-reward in any formation you play, said Johnston, who didnt start but came into the game in the second half at center back and pushed central starter Allie Long into midfield. Thats what were trying to figure out, thats why were playing great teams. These are teams that are going to expose us in certain things that we want to learn about.

While the defense and midfield settled after the early rout, the connections in the attacking third were lacking. Lloyd played too often to Tobin Heath on the left wing, leaving promising youngster Rose Lavelle a spectator. Heath created some chances, including one of the better shots of the game, but she also squandered an opportunity to pass after beating several defenders along the end line.

The offense kicked up a notch with the introduction of Mallory Pugh and the electric Crystal Dunn in the second half, but France defended calmly and was always dangerous on the counter.

For longtime US womens soccer viewers, the game was a bit ironic. The knock on the USA over the years was that they won with speed and determination, not skill. In this game, the situation was reversed. France used an athletic press and speedy transition to keep the USA at bay.

Still, the USA will need to work on finding the right combinations to unlock good defenses. They finished the three-game SheBelieves Cup with only one goal, the winner in the opener against Germany. Lloyd may be miscast in the attacking-mid role in the 3-5-2, and other players are still figuring out their roles in all areas of the field.

I think we got better as the game wore on, but obviously when you go down two goals in 10 minutes, the whole game changes, Sauerbrunn said.

And the USA should benefit from the freedom to experiment something the team often hasnt been afforded for a variety of reasons. Short is a promising back, Lynn Williams scored the winner against Germany, and Naeher was not at fault on the three French goals.

Even better, fans seem to grasp that the US womens team is not just the handful of players who write books and appear on talk shows. The cheers for Dunn, the only former Washington Spirit player to appear in the game, were deafening, but the cheers for lesser-known, less-experienced players were strong as well. And the US men would be more than pleased to see crowds of 16,318 (Philadelphia), 26,500 (New Jersey) and 21,638 (Washington) in rain or cold weather for their less meaningful games.

The team still does not have a collective bargaining agreement in place. But Johnston and Sauerbrunn confirmed that, unlike the 2013 season, players will report to NWSL preseason camps on time this month regardless of the next few negotiations that have been scheduled.

And good club games, here and abroad, will help the USA keep pace in a sport that is quickly getting better and better.

Simon
← Previous Story Patagonia and The North Face: saving the world one puffer jacket at a time
Next Story → The growth in unusual business qualifications – BBC News