‘We had nothing to give him’: the human cost of malnutrition in Maharashtra

Two months after his second birthday, Vishwarnam Sawra died in his mothers arms, one of thousands of young lives lost to malnutrition in the Indian state of Maharashtra after years of drought and the withdrawal of state nutrition schemes 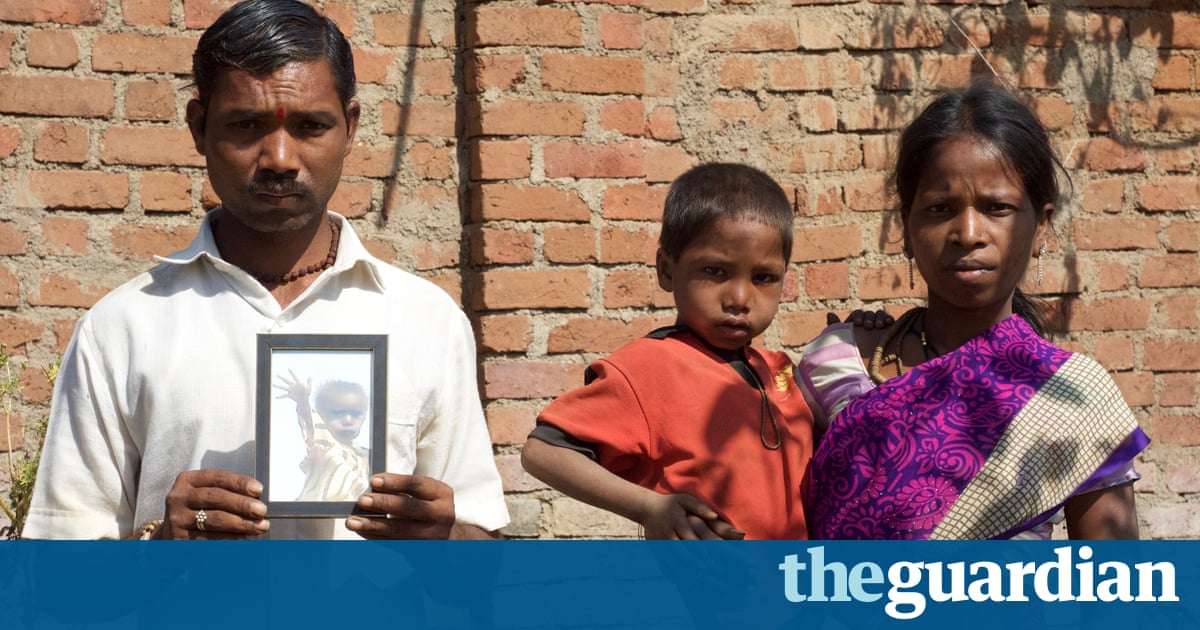 The most valuable thing in Devganga Sawras hut is a memory card wrapped in lined notepaper and hidden in an earthen pot by the family shrine. The card, barely the size of his fingernail, has the only four images of his youngest son, Vishwarnam. You have to put this in a computer, he says. There are some pictures two or three. You see, in our village, the tradition is that when someone dies, we bury all their things with them so that they dont cause the family any more pain.

Vishwarnam died in his mothers arms aged two years and two months. He weighed just 6.5kg, less than half of what a child his age should. I was sitting in my house, holding him in my lap. He didnt make a sound, he was sleeping, and then suddenly he opened his eyes for a moment, and then he closed them forever, recalls his mother, Sunder. His brother and sister cried all night for him. He was very ill, she says.

He barely ate, Devganga says. We didnt have anything to give him. What do people have here to eat? A bit of rice, a bit of wheat. Thats all.

The blurry images on Devgangas memory card show the frail toddler in an oversized T-shirt weeks before he died of hypothermia, a common cause of death among underweight babies.

Thousands of children have died because of malnutrition-related conditions in the west Indian state of Maharashtra in the past year.

Devganga, whose work as a road builder earns him a daily wage of roughly 100 rupees (1.19), says he like many others in his village of Khoch had not been paid for months, and food supplies were running low. He was very sick. We took him to see the doctor in Mokhada, he says, referring to the nearest clinic, which is a 10km walk from the Sawra home. They told us they couldnt do anything to treat him, and wed have to take him to Nashik [a town about 60km away], but where do poor people like us get the money to go all the way to Nashik? We decided to start saving but then, two or three days after that, he died.

The prevalence of malnutrition in Maharashtra is alarming. A series of government schemes in India over the past two decades has led to a dramatic fall in under-nutrition and stunting since the 1980s. According to a Unicef report, the percentage of underweight children in India under the age of five fell from 55% to 29% between 1988 and 2014.

Between 2005 and 2014, Maharashtra had one of the countrys most effective state-run nutrition programmes. The efficacy of the scheme was lauded in Unicefs global nutrition reports, including the 2016 edition, and replicated in states around India. But five years of drought, coupled with the withdrawal of government nutrition schemes in the past two years, has led to a dramatic regional increase in malnutrition.

In the Pahlgar district alone, where the Sawra family live, malnutrition was linked to 315 child deaths between January and September 2016, according to the latest government figures.

The Bombay high court claims malnutrition caused the deaths of more than 17,000 people in Maharashtra between September 2015 and September 2016. Judges criticised the government for inaction over the deaths.

At the Mokhada hospital, near the Sawras home, Dr Mahesh Patil says women come to him daily with underweight children. Most of the cases are mild, but around 20%-30% are severe, and of those around 30%-40% are near death.

Patil is one of only two doctors at the government hospital, which lacks the facilities to deal with malnutrition cases. Each day, Patil sees about 250 patients with various ailments, which gives him barely two minutes with each one. Villagers complain that field doctors who do rounds often dont have medicines, which means families have to walk miles to reach the nearest medical centre. Patil says: I am a gynaecologist, the other doctor here is a [GP]. We dont have a paediatrician here. Thats why I have to tell some of the people who come here to go to a bigger city.

Vinita Ved Singal, spokesperson for Maharashtras department for women and child development, says the government has introduced various initiatives to help mothers look after undernourished children. We have a whole plethora of programmes and schemes at district level which are area-specific, and are designed to help malnourished children, she says. These people have been given money through employment in government schemes, and meals are provided every day for children at the local anganwadis [mother and child care centres]. The children who come there should be getting at least one hot meal a day, plus four eggs a week.

Simon
← Previous Story Travellers cast off inhibitions on no pants subway ride day in pictures
Next Story → Contrary to reports, Yahoo is not changing its name to Altaba