Erdoan, emboldened by the rise of Trump, is crushing fragile freedoms tens of thousands detained and the press muzzled. The west must end its silence 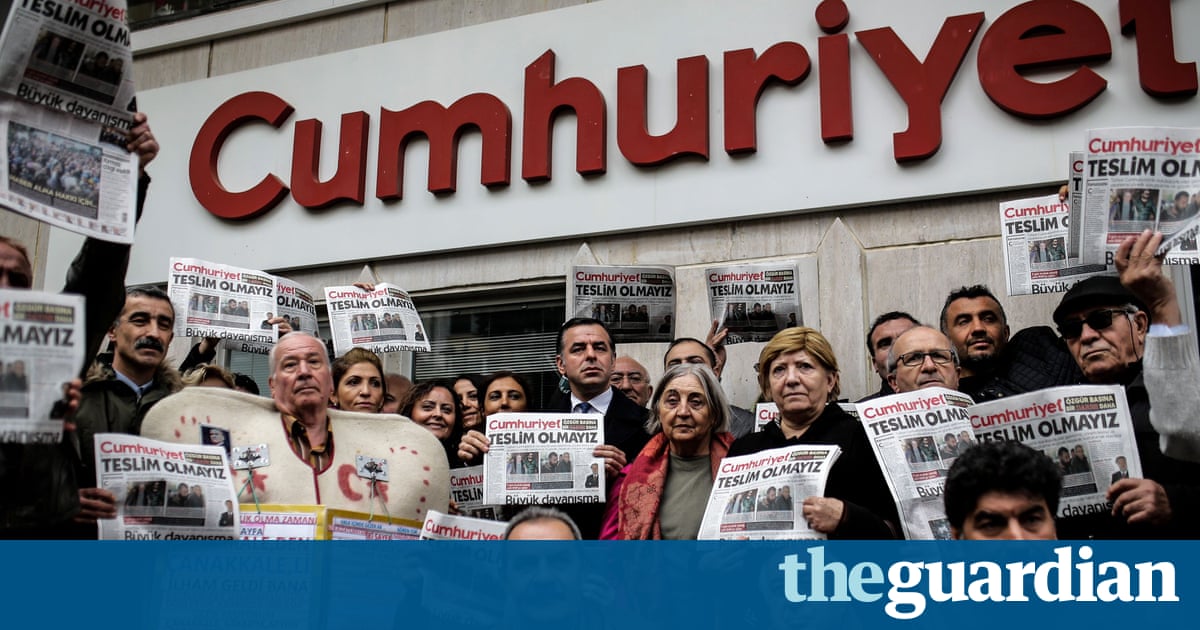 Democracy is a bundle of rights and freedoms wrestled from the powerful. Our rulers only surrender their power when compelled to when the cost of resisting pressure from below becomes greater than the cost of giving ground to it.

But it is naive to regard these concessions as permanent. Elites are always waiting for opportunities to seize back their power. The ideal excuse is a national crisis, contrived or otherwise, normally involving an alliance of internal and external threats, all requiring drastic measures to defeat. The authoritarian rightwing populism sweeping the Western world skilfully exploits fear to drive back the borders of democracy.

Turkeys regime is fast degenerating into outright dictatorship, emboldened by the imminent ascent of Donald Trump to the most powerful position on Earth. I spent last week with Turkeys beleaguered opposition parties, newspapers and activists. Their courage is inspiring, their plight distressing.

Last July an attempted military coup failed to dislodge the autocratic president, Recep Tayyip Erdoan. The backlash was swift. As Human Rights Watch reported, the regime took advantage of the moment to crack down on human rights and dismantle basic democratic safeguards. More than 120,000 Turks have been sacked, nearly 90,000 detained, and more than 40,000 have been arrested, 144 of them journalists. Turkey is a world leader in jailing media workers, with some 160 outlets closed.

So how did things deteriorate so badly? Erdoans Justice and Development party (AKP) was, for many years, in alliance with a secretive movement led by the US-based cleric Fethullah Glen. The Glenists infiltrated much of the Turkish state, including the army, police and education system.. It was, in part, a marriage of convenience: both sought to drive out authoritarian elements that opposed Islamism. But the means were, from a democratic perspective, dubious.

In 2013 the two sides fell out, and Turkeys rulers accused the Glenists of plotting the failed coup. But this charge has been used to suppress a secular opposition that has no association with Glenism whatsoever. There have been clampdowns on the media and basic democratic freedoms, concentrating even more power in the hands of the regime.

Ahmet Sik is a prominent Turkish investigative journalist who would fearlessly challenge authority. In his book The Imams Army, Sik exposed how Glenism infiltrated everything from the judiciary to the security services, building a parallel state. Ahmet knew it had heavy risks, a friend says, but he went ahead and published the book.

Sik was jailed in 2011, and his book was banned. Even when he was released, he refused to be silenced: he said the AKP and the underground terror group FET, allegedly affiliated to Glen, were working in hand in glove. His friends called him a hero, a label he resented. Its only that everyone else is silent that I look like a hero, he said.

Turkeys current justice minister has praised Glen as a great Islamic scholar. But in 2013 Sik exposed a full-scale war between the government and the Glenists. And after the failed coup, Sik refused to stop exposing the AKPs past associations with the Glenists. If they were blaming FET for the coup, as his friend puts it, then the AKP were partly responsible because they had worked together for so long.

Last month Sik was arrested for spreading terrorist propaganda on social media, and not just on behalf of FET he was also accused of backing the PKK, which fights for Kurdish national self-determination and is diametrically opposed to Glenism. So a journalist persecuted for exposing regime links with Glenism was locked up on charges of being in league with Glenists.

I visited the newspaper Cumhuriyet, whose office lies in the shadow of Trump Towers Istanbul. So many of its journalists have been arrested, it is on a skeleton staff. Moreover, 189 journalists have been physically or verbally abused, and hundreds have had their press cards confiscated in effect banning them from their job. And opposition papers are being commercially asphyxiated, with advertisers pressured to withdraw.

Then theres the opposition: members of the leftist HDP have faced mass arrests, offices raids and accusations of terrorist links. The secular centre-left CHP told me: We represent western values, but the west has abandoned us.

Journalists and civilians alike have been rounded up for the crime of insulting President Erdoan. Perhaps in solidarity the people of the world should make his name the ultimate insult. As he cows opposition, the president now intends to rig the constitution to grant himself even more sweeping powers.

The west is largely silent. And Erdoan is triumphalist. Last July Trump praised Erdoan for turning it around after the attempted coup. And Erdoan cheered Trumps car-crash press conference last week: Trump, who told a CNN reporter that the organisation he worked for produced fake news, had according to Erdoan put the reporter in his place because media organisations such as CNN undermine national unity.

Turkeys fragile democracy is being bled to death. It is dusk for democracy in Poland and Hungary too, as populist rightwing governments keep the superficial trappings of democracy for appearances sake but hollow it out in practice. Now that the demagogue Trump is about to become the worlds most powerful man, the authoritarians believe history is on their side.

Turkey is a warning: democracy is precious but fragile. It underlines how rights and freedoms are often won at great cost and sacrifice but can be stripped away by regimes exploiting national crises. The danger is that Turkey wont be an exception, but atemplate of how to rid countries of democracy. That is reason enough to stand by Turkey. Who knows which country could be next?