Why wouldn’t it go viral? Clowns are unnerving and funny at the same time | Jason Wilson

Ben Radford, the author of a new book, Bad Clowns, isnt surprised by the scary clown sightings that have moved from the US to the UK and Australia 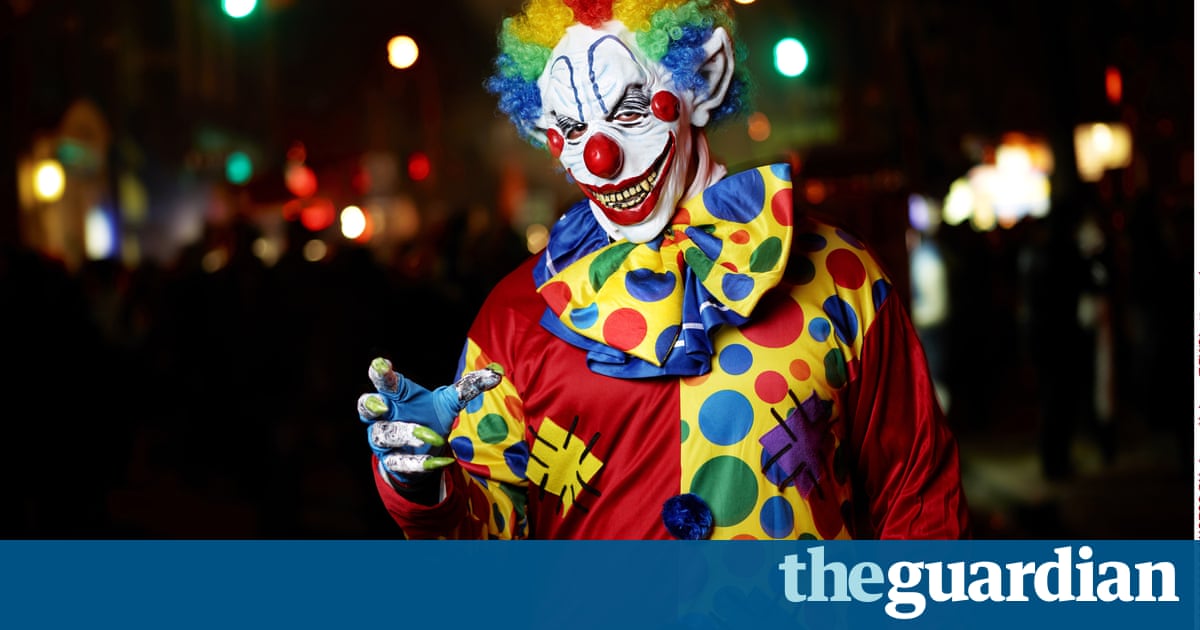 It started in Green Bay, Wisconsin. On 1 August, witnesses reported a clown walking around with black balloons.

At the end of that month, in Greenville, South Carolina, a clown tried to lure some kids into the woods. Four days later, in Winston-Salem, North Carolina, the same thing happened.

On 6 September, local news in Greensboro, just up the road, reported that a person wearing a scary clown mask, a red curly wig, a yellow dotted shirt, blue clown pants, and clown shoes was chased off by a local with a machete.

Things became wider, faster. A school was locked down in Flomaton, Alabama, after a clown made threats online. A middle school student in Athens, Georgia, was arrested for bringing a knife to school to protect herself from clowns. A gang of clowns robbed a fast food joint in Phoenix.

By October, clowns had gone worldwide, with sightings in Edmonton, Canada and Melbourne, Australia. Someone recorded one riding a mobility scooter in Sheffield, UK.

Last week, President Obamas spokesman, Josh Earnest, was asked about the nasty clown epidemic. I dont know that the president has been briefed on this particular situation, he replied. Obviously, this is a situation that law enforcement is taking quite seriously.

Ben Radford, the author of the new book, Bad Clowns, isnt surprised by these developments.

Clown panics, as he calls them, have happened on and off since the 1980s. There was a minor outbreak in 2013, but not on the scale of whats happening now. They proceed through copycat behaviour. And at a time when social and mainstream media are caught in a feedback loop of mutual amplification, they spread quickly.

Why wouldnt it go viral? he asks of the most recent scare. Its unnerving and funny at the same time.

But why are clowns scary? Radford says that sanitised, domesticated clowns like Bozo and Ronald McDonald obscure the fact that clowns have always been, at best, ambivalent figures.

Darker, more sinister currents and threads go back to the earliest versions of the clown. The clown has always been an ambiguous character. Clowns were never really good, so its not really accurate to ask when clowns turned bad. They never claimed to be good.

We can never be sure, when clowns are laughing, whether or not its at our expense.

The court jester was a figure who had license to speak ill of anyone including the king. The clown has always had a license to say things that are impolitic or rude.

If we look at them over the long term, Radford explains in his book, theyre less like the benevolent figure of hamburger ads and birthday parties, and more like the trickster archetype, a category that Radford points out includes the devil.

Clowns have long associated with bad behaviour. Punch, the British figure of folklore and street theatre, is a wife-beating, mass-murdering infanticidal monster. Pagliacci murdered his wife in costume. And in The Pickwick Papers, Dickens presented a clown whose private life was one of alcoholic dissipation.

Only later, especially in the USA, did the happy, good polite clown become the clown that we all recognise.

More recently, writers and filmmakers in the horror genre saw an opportunity to restore the balance.

People like Stephen King took that character on its head, but really he was picking up the threads of the earlier, scary clown.

Beyond this history, theres something viscerally confronting about seeing a clown in makeup.

The most obvious thing that is unnerving is the mask. Their human features are hidden, and instead this grotesque version of human features is there.

The makeup, designed for the big top, does not always come off well in face to face encounters.

The intent isnt to be frightening, but it is, especially close up. Masks help hide identity and strip away information that we use to read people. Suddenly, youre dealing with a masked stranger near you, and possibly near your kids.

We tend to want our clowns to be cordoned off, for safety.

We like our clowns in very specific, socially prescribed contexts, like circuses, birthday parties, or rodeos. If you see a clown walking around your street late at night, theres no context for that. Its boundary violation that creeps people out.

Especially when seen in a suburban street, clowns also perhaps violate or blur the distinction between the real and the imaginary. The suit and the mask obliterate the individual we rationally know to be underneath them. Suddenly, a figure of fantasy walks among us.

Simon
← Previous Story Kim Kardashian is still dealing with the traumatic Paris robbery, according to Khlo
Next Story → Teens Stand Frozen To Sing In Hotel Pool When Chaperone Runs To Balcony At Just The Right Moment