Yes, a Submerged Floating Bridge Is a Reasonable Way to Cross a Fjord

If you want to drive the 680 miles from Norway’s bustling southern portof Kristiansand to Trondheim in the north, be ready to spend 21 hours in the car. That’s an average of 30 miles per hour, and you have the country’s signature geological features to thank. The route, along highway E39, crosses seven gorgeous but inconvenient fjords, and that means seven ferry trips.

Now, a $25 billion infrastructure project promises to cut the trip to just 10.5 hours, by installingpermanent crossings across those fjords by 2035. Because many of these waterways are wide and the largest is nearly a mile deep, a typical bridge won’t do.So Norway is considering fording its fjords withsomething the world has never seen before: a submerged floating bridge.

Thats the fancy term for a traffic tube that’s under about 100 feet of water—and above hundreds more.

Its not actually that crazy, says Arianna Minoretti, a senior engineer with the country’s public roads administration. According to their tentative plans, the4,300-feet deep, 3,300-feet wideSognefjord may be the perfect candidate for this first-of-its kind crossing. The structure would be made up of two curved, 4,000-foot long concrete tubes—one for each direction—hanging 65 to 100 feet below the surface.

Pontoons on the surface would hold up the tubes, and connecting trusses would keep them stable. The structure mightalso be bolted to the bedrock below, for extra stability. Driving through one of these would feel like driving through any othertunnel, says Minoretti. (For a preview, claw through New York’s Holland Tunnel at rush hour, and imagine there’s water below you as well as above.)

The design offers plenty of advantages over saner-sounding, conventional alternatives. Rough weather won’t mess with the underwater structure, Minoretti says, so Norway’s more rural residents never get stranded. Having this connection means that people there do not have to wait for a helicopter to go to the hospital.

Norway’s also considering building a suspension or floating bridge over the water. Either could mess with the Navy ships that sometimes train in these waters, and mar the majestic, fragile, and highly bankable beauty of the fjords. (Digging a standard tunnel as far as a mile below the surface is impractical.) A floating tunnel obviates those problems—and shouldn’t be any more expensive than the saner-sounding, conventional alternatives, the engineers say.

Buildingthe thing shouldn’t be as hard as it it sounds. This idea of Norways is sort of an intermediate technology of things that have been done before, says Henry Petroski, a Duke University civil engineer who specializes in bridges. The structure borrows concrete construction techniques from tunnels, pontoons from floating bridges, and tether technology from offshore oil platforms.

Plus, its cool. For an engineer working on this structure, its like being on the Discovery Channel every day,Minoretti says.

But there are some serious question marks ahead. The Norwegians are still working to fill in geological blanks: What do fjords sea beds really look like? Can the bedrock support the strong tethers needed to keep something like this from becoming a car-filled Slinky?

There are structural questions, too. Norwegian engineers are busy calculating what sort of wind and waves a submerged floating structure could handle, and how the currents at different fjords might affect its movement. Theyre figuring out how workers might maintain infrastructure deep beneath the sea. And theyre studying how to reinforce its structural integrity should—Gud forby!—a submarine run straight into it while cars are rolling through. As envisioned right now, the bridge could lose at least one supporting pontoon without collapsing. In an emergency, motorists could use the connecting trusses to move from one tube to the other.

Once government contractors and workers settle all the technical issues, politicians get to decide what sorts of infrastructure will be used to cross the road’s fjords. They could go snoozy, and choose a floating tunnel. (Washington State already has one of those.) They could choose to break the world record for the longest suspension bridge. They might even keep one or two ferries in the mix, for old times’ sake. Or they could choose the option that resembles a bendy straw cutting through a soda.

One thing Norway isnt losing sleep over is the the creepy-crawly feelings associated with driving through a tunnel suspended beneath the waves. Norwegians are quite used to going underwater in tunnels, says Kjersti Kvalheim Dunham, the project manager overseeing the revamping ofthe E39 route. The nation’s already got 1,150 tunnels, 35 of which go under water.

Yep, thats right. The Norwegians might bebraver and better at engineering than you. 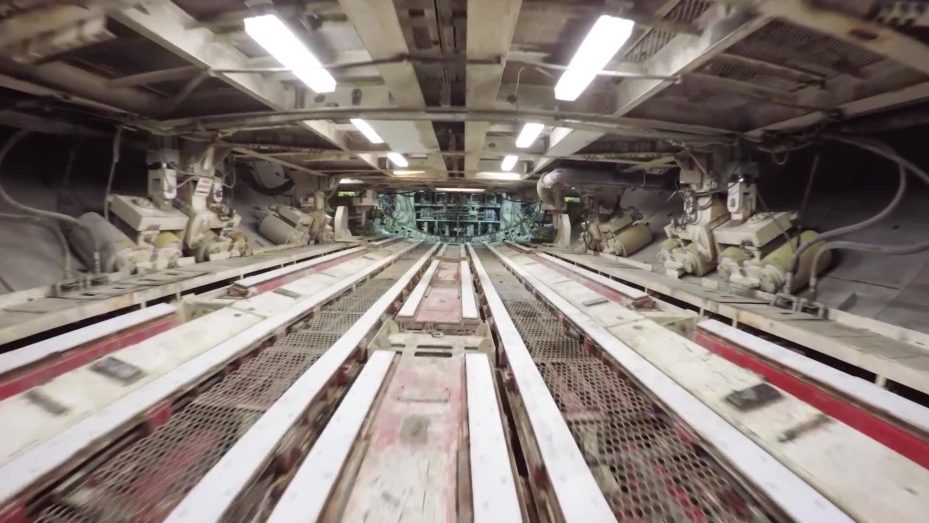