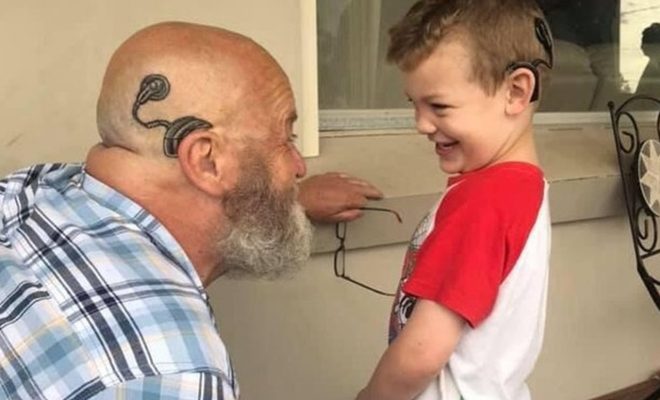 Most people get tattoos because they’re trendy or they feel some sort of connection to a specific design. Others do it because they want to make a social or political statement. But there are some who get tattoos that have a much deeper meaning than aesthetics. Just ask these folks who used their tattoos to help them cope after a serious injury, to mourn the loss of a loved one, or even celebrate a big win. Other tats represent a memory of doing something good like working as a first responder.

Pikabu user Kassad797 wasn’t hiding a scar or an injury with this tattoo. It was a way for him to pay tribute to his work as a first responder. The tattoo shows him in his uniform holding a sword to keep the grim reaper away from the people he has saved, and we have to say, we’re pretty impressed.

Reddit user u/-criesuncontrollably didn’t want his grandson to feel odd simply because he was the only one wearing a cochlear implant, so he got himself a tattoo of the device so his grandkid had someone he could relate to. Is he the best grandpa ever, or what? We wish every kid had someone like him in their lives. Heck! We want him as a grandpa too!

Reddit user u/blakerjames already had one artificial leg. So, he figured he’d make light of the situation and get a tattoo in the other one. Now, people who see him walking down the street will think he’s full-on bionic. Can you spell badass? Cause this Redditor certainly can!

Reddit user u/CaptainPeaches77 lost her stepdad when he took his own life, but her love for him was so strong that she got this tattoo on her arm of the three powerful words he once wrote to her: “Love You, Kiddo.”

Reddit user u/Big-Buff-Cheeto-Puff brought her mom and grandmother to a tattoo parlor called Hula Moon in Pensacola, Florida, and all three of them got the same red rose on their ankle. Now is that adorable, or what?

Reddit user u/jgsvst will never forget the time he survived a serious brain infection that almost cost him his life. But if he ever starts to, he can look at this tattoo of his before and after CT brain scan to remind him how lucky he was.

Walk With Me, Puppy

Reddit user u/poodlethenoodle got this tattoo of her pup who passed away. Since it’s on her calf, it’s like he’s still walking with her whenever she goes out. So, in a sense, he’s not really gone at all. What a lovely way to remember a pet!

She Loves Her Leg Tattoos

Reddit user u/nikeheart didn’t really like the way her legs looked, but all that changed when she started adding tattoos to them. Now she claims to slowly be falling in love with them, and if we’re being honest, so are we.

I Love You Soundwaves

Reddit user u/GurleyMan30 spent a year and a half fighting to gain custody of his two sons who were 6 and 4. Once he won, he got them each to say “Daddy, I love you.” Then the tattoo artist used the sound waves as a template for his tattoo, one on each arm.

Reddit user u/TastyMalort had been bartending in Chicago for 10 years. So, what better way to celebrate her 10-year anniversary than by getting a tattoo of a lime slice. She can even squeeze it by bending her arm. But she better be careful or she’ll squeeze lime juice into her eyes whenever she flexes too much.