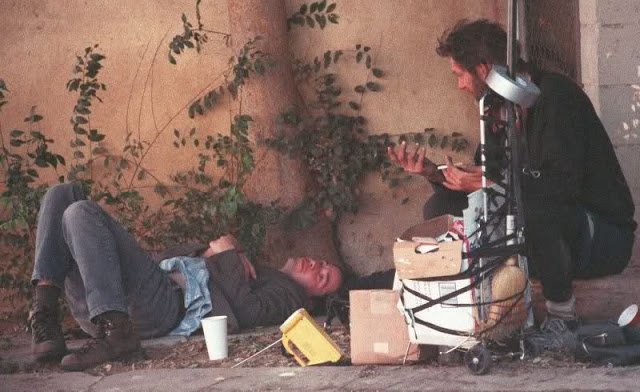 When you hear the name “Keanu Reeves” you immediately think of his “Matrix” character, Neo. Well, that’s the case for most Millennials. But the actor’s so much more than just another hunky Hollywood star. He’s all-around awesome! In fact, he may be one of the coolest guys in Tinsel town. He’s humble, kind, and has been through so much that many fans don’t know how he remains so pure at heart. Here’s a list of things that make Keanu so extraordinary!

Keanu’s as hot as any celebrity can get, so he could pretty much get anyone to travel with him. But it seems that his traveling companion is none other than a plush toy, which he took with him and took photos with while traveling in China. But that’s just the tip of the iceberg. The hunky Hollywood actor is as quirky as they come!

He Took a Break to Walk a Pit Bull

Look at the woman in the back looking all terrified. Then again, wouldn’t you be if you saw Keanu with a bloody face and walking a pit bull in New York City? Actually, the blood was fake from when he filmed “John Wick 2.” But obviously, Keanu loves animals enough to take a break from shooting a movie and take them for a walk. Awww!

This guy’s loaded, so he could literally buy a whole closet full of designer shoes and boots. But what does he do instead? He tapes his messed-up shoes and uses them until they’re practically unwearable. At least, that’s what it looks like. Maybe he doesn’t like the idea of breaking a pair of new shoes in.

Most celebs have a huge ego, but not him. While being interviewed at the “Toy Story 4” premiere, Keanu was looking all nice and spiffy. He probably heard the news already, but he seemed so modest when the reporter told him that he was the internet’s boyfriend. Maybe he felt uncomfortable, but everyone deserves to know they’re loved.

He Was Crushing on His Co-Star

We’ll never know if Sandra Bullock and Keanu Reeves would have made a lovely real-life couple. But their characters seemed to hit it off in the film “Speed.”  And it turns out that Sandy had a big old crush on her gorgeous co-star. It’s too bad that she didn’t realize he had one on her, too.

He Hangs With the Less Fortunate

His Hollywood status doesn’t affect his humanity. From this photo we see Keanu having a chat with a homeless man. He obviously doesn’t let the fact that he’s a celebrity affect the way he treats the less fortunate.

Keanu’s in Love With Puppies

Keanu and pups? Have you ever seen anything more wholesome than this? Not only does he get along with humans, but he’s got a soft spot for pooches too. Judging from these images, he’s like a freaking happy kid in a grown man’s body.

Life really did a number on Keanu. Most people in his shoes would have just given up and dropped off the face of the Earth. But he dealt with all the horrible things that happened to him and found it in his heart to give to others. The man’s obviously a saint.