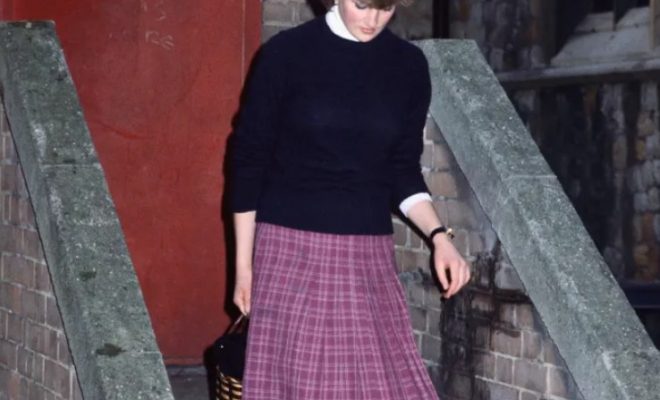 Rare Photos of Diana Before She Became a Princess

Before she married Prince Charles and became one of the most recognizable figures in the world, Diana lived a life of privilege that prepared her to become a princess. Here are ten rare pictures of her before she became royalty.

The photograph captures a moment from June 1981, just a month before the historic wedding of Diana Spencer and Prince Charles, that would see her officially become a member of the British royal family. In the photograph, she is seen with Princess Margaret, the Queen Mother, and Prince Charles as they leave the wedding of Nicholas Soames. The picture showcases Diana’s impeccable sense of style, as she is wearing a beautiful red dress with a matching hat that perfectly complements her attire. The dress is a lovely example of the time’s fashion, and her poise and elegance are fully displayed. The hat is a particularly striking element of her outfit, adding an element of sophistication to her overall look. It is not hard to see why the photograph is considered iconic and why many people love her attire in this photograph.

Princess Diana, also known as Diana, Princess of Wales, was born in Park House, Sandringham, Norfolk. This location served as her childhood home, where she spent a significant portion of her formative years. The photograph is of a young Diana, captured while she was still a child, on the grounds of Park House in her pram. She is seen as a cherubic and innocent young girl with an adorable expression on her face. The photograph perfectly captures her innocence and youthful spirit, and it is not hard to see why she is described as looking “absolutely precious.”

Before her fairytale wedding to Prince Charles, Diana Spencer held a job as a teacher’s assistant at the Young England School in Pimlico. This was a significant achievement in itself, as it was reported that she was the first woman in British history to have held a paying job before marrying the heir to the throne. This fact highlights Diana’s determination, ambition, and desire to have a career and independence before becoming a member of the royal family. It also serves as a reminder of how she broke away from the traditional expectations of royal brides and paved the way for future generations of women in the royal family to have their careers and independence.

In this photograph, Princess Diana is captured at the tender age of just one-year-old. Diana later spoke about her childhood as incredibly unhappy despite her privileged background. However, it is undeniable that her family was well-off and enjoyed a significant degree of privilege. Her father, Earl John Spencer, was a wealthy landowner, and his family had close ties to the royal family that spanned several generations. This photograph serves as a reminder of the young and innocent Diana, who would go on to become one of the most iconic and beloved members of the royal family. Despite the unhappiness she may have experienced in her childhood. It is clear that she was surrounded by love and privilege, which undoubtedly played a role in shaping the person she would become.

Before her wedding to Prince Charles, Lady Diana Spencer was already a frequent attendee at polo matches where she would watch her future husband play. The photograph captures her at one of these matches, and it is clear that she looks young and innocent in this picture, almost as if she had no idea of the whirlwind her life was about to become. The photograph serves as a reminder of the young woman Diana was before she became a royal family member. It is interesting to see the contrast between her carefree and youthful demeanor at the polo match. The poise and confidence she would come to exude as a royal family member. It also highlights her interest in polo and her support for her husband’s interest and passion.

The photograph is from 1980, a time when Lady Diana Spencer was first romantically linked to Prince Charles. It captures her in London, near her flat, as photographers follow her. Even at this early stage, it is clear that Diana already had a keen sense of fashion, as evidenced by her choice of attire. She is seen wearing a stylish red blazer and a pin-striped skirt, which perfectly complements her overall look. The photograph serves as a reminder of the early days of Diana’s relationship with Prince Charles and the intense media attention that followed. It also highlights her sense of fashion and how she was already aware of how to dress appropriately, even before she became a royal family member.

The photograph captures a moment from October 1980, when Diana Spencer is leaving the nursery school, Young England School in Pimlico, where she worked as a teacher’s assistant. During this time, her fashion choices were more conservative, as evident from her attire in the picture. She is seen wearing an awfully long plaid skirt, a popular style of the time. The photograph serves as a reminder of Diana’s life before she became a member of the royal family and how she had a career as a teacher’s assistant. It also highlights the time’s fashion and how it differed from the more glamorous and sophisticated look she would adopt later on. It also showcases her professionalism, as she was dressed conservatively, appropriate for her profession as a teacher’s assistant.

The photograph captured a moment in 1978 when a young Diana Spencer was a bridesmaid at her sister, Lady Jane’s wedding to Robert Fellowes. At just 16 years old, Diana looks elegant and poised in this photograph. The photograph serves as a reminder of Diana’s close relationship with her family and how she was an important part of her sister’s special day. It also highlights the difference in the path between Diana’s marriage and her sister’s marriage. While Diana’s wedding to Prince Charles ended in divorce, her sister’s wedding has stood the test of time and has been going strong for more than 40 years. It also serves as a reminder of the young and innocent Diana, who would go on to become one of the most iconic and beloved members of the royal family.

The photograph captures a moment during Princess Diana’s first public appearance at a fundraising concert at Goldsmiths Hall in London in 1981. The picture showcases Diana’s intense media attention from the beginning, as a sea of photographers surrounds her. Her poise and elegance are on full display as she stands there in a beautiful black taffeta dress, which perfectly complements her overall look. The photograph serves as a reminder of the beginning of Diana’s life in the spotlight and how she was already commanding attention and admiration from the public, even before her official entry into the royal family. The photograph also highlights the beautiful and elegant black taffeta dress that Diana wore on her first public appearance, which perfectly represents her sophisticated and refined sense of fashion. It also serves as a reminder that this was the beginning of her life in the spotlight and that she would go on to become one of the most iconic and beloved members of the royal family.

The photograph captures a moment from 1980, when the young and beautiful aristocrat, Diana Spencer, was already attracting the attention of the press. In the photograph, she is seen in her new car, a Mini Metro, outside the school in Pimlico, where she worked as a teacher’s assistant. The photograph showcases Diana’s reaction as she stalls her car, and one can see the expression of frustration and embarrassment on her face. The photograph serves as a reminder of Diana’s life before she became a member of the royal family and how she had a career as a teacher’s assistant. It also highlights the intense media attention she was already receiving, even before her official entry into the royal family. The photograph also serves as a reminder of how even the most poised and elegant individuals, like Diana, can have moments of vulnerability and frustration. The photograph also showcases the car, a Mini Metro, which was quite popular in the UK during that time, and how Diana had a car and drove herself to work, which was unusual for a woman of her status and background.