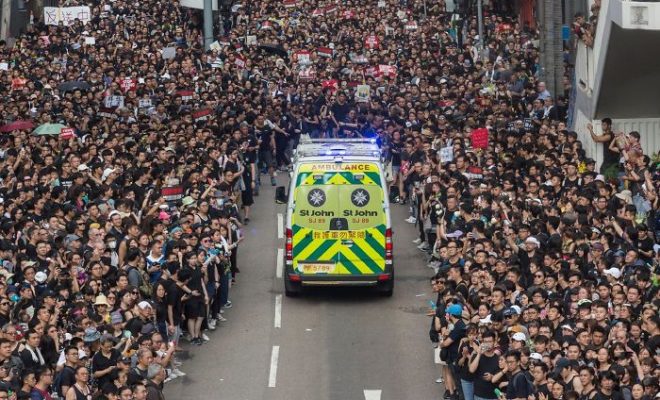 Usually, massive protests are designed to promote change over a great injustice, but they can easily get messy…unless you’re in Hong Kong, of course. Recently, the city was plagued by protests over a controversial extradition bill, but these photos prove how respectful and disciplined you can be, even when you’re fighting injustice.

They Multi-Tasked While Protesting

The people of Hong Kong always manage to prove a point without the need for major violence. There were about 2 million people protesting here, but everyone stayed super respectful and disciplined despite the fact that they were fighting a cause they strongly believed in.

They Protect the First Aid Area

People get injured even in the most peaceful of protests. So, these volunteers wore ponchos, masks, and goggles to form a human wall that protected the first aid area outside the Admiralty station across from the Hong Kong Central Government offices. Good on these people for being so wholesome!

While protesting outside the Government Headquarters in Hong Kong, these protestors were prepared to shield themselves from the police, who were using pepper spray. Who knew umbrellas could do more than shield you from the rain?

They Parted for an Emergency

Peaceful or not, emergencies can happen, and when there was only one way for this ambulance to go through, the Hong Kong Protestors parted like the Red Sea to allow them to reach their destination and save a life.

They Lent Journalists a Hand

Authorities still used tear gas deployment at protests. Unfortunately, the journalists in the area also felt the effects of the gas. So, protesters gave them gear to protect themselves. This just shows that their main focus is to fight the good fight.

In Case of Emergency

Protestors left water bottles along the pavement. These bottles could be used by anyone who needed to douse themselves after being hit with tear gas and to put out teargas grenades when the cops move in. Plus, the bottles are lined up so neatly, we can’t help but stare in awe.

Even in the midst of a protest, the people of Hong Kong were mindful of the environment. So instead of leaving dozens of empty water bottles lying on the street, they left them neatly stacked next to an overflowing plastic recycling bin.

They Tidy Up Afterwards

This crowd returns to the site of a former protest to sort out the recyclable materials and do away with the trash so that the Hong Kong Government offices are all nice and clean. If only the people in Woodstock had been this tidy.