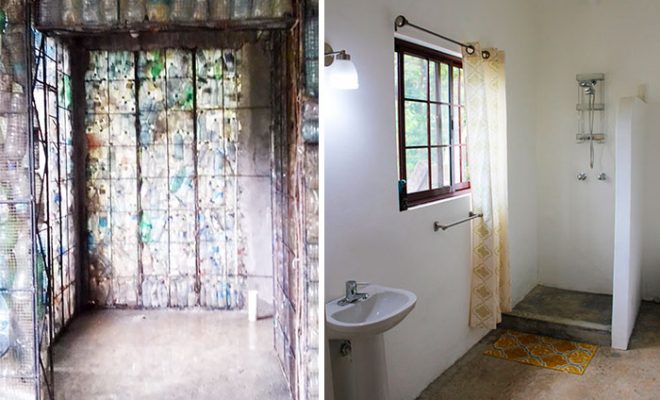 Not too long ago, we celebrated Earth Day but the wellbeing of our environment is something we should be doing every day like Robert Bezeau does. This incredibly resourceful man came up with a great solution to the ever-growing plastic pollution that is threatening animal lives in the air and in the sea. Instead of throwing plastic bottles away, he uses them to build homes that look so good, you’ll be asking him to build you one. Heck, you might want to build one yourself!

He Was Tired Of Plastic Bottles

Robert Bezeau is a Canadian entrepreneur who had had enough with plastic bottles lying everywhere. So he did some brainstorming and came up with a brilliant new way of reusing the bottles, but first, he had to relocate to Bocas del Toro, Panama.

He Built A Village With Plastic Bottles

Once he got to Panama, he started building a village, but not just any village. It was a plastic bottle village, and it had a huge purpose. This project was going to help reduce plastic waste in landfills and other areas like the ocean, which jeopardizes sea life and birds looking for food near the water.

Plastic Has Tons Of Purposes

Robert stated in his public message that plastic bottles could be used for a number of things like home insulation, rapid temporary shelters after disasters, buildings for animals on farms, building swimming pools, water catchment tanks, septic tanks, agriculture waterways (land drainage), commercial warehouse construction, barns, and even roads. In other words, we’re wasting away millions of plastic bottles each year when we could be building incredible things with them!

“I want the world to realize that we can reuse plastic bottles in many other applications such as:

In the Eye of the Beholder

During construction, the buildings can seem like a bit of an eyesore, but once the project ends, the homes look just as beautiful any regular home, and most of us would jump at the chance to live in one. But building homes isn’t the only reason Robert is doing this for. He wants to raise awareness of the importance of reducing plastic waste.

Robert’s website analyzes the history of plastic waste worldwide and the events throughout history that have made a major impact on the plastic bottle pollution crisis we’re dealing with.

You Won’t Guess Who Started It All

They Gave Consumers the Responsibility

The bottlers had practically given us, the consumers, the responsibility of saving the world through recycling. Thankfully, people like Robert have taken the initiative to put a stop to mindless plastic consumption.

You Can Be a Part of It

In fact, if you go to his website, Plastic Bottle Village, you can take a look at some before and after shots of the home. Best of all, you can buy the land and build a house on the island too. The land only costs about $19,000 and architects are standing by to build your dream home.