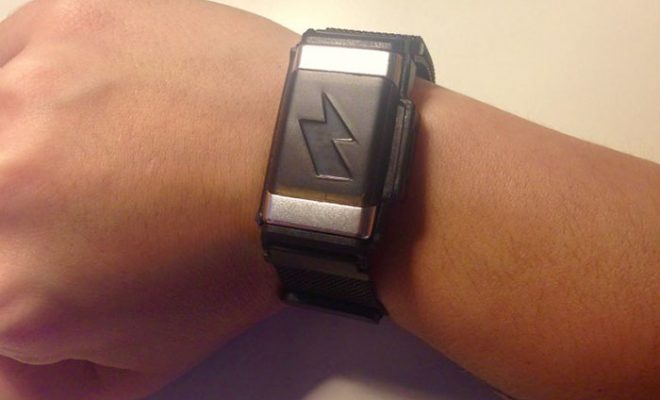 You’ve all heard of shock collars to teach dogs to stop barking. Well, now Amazon’s selling a shockingly cool gadget in the form of a bracelet and it’s for humans. Although people don’t bark, they generally have trouble with their eating habits, spending too much money, or falling asleep. But this device may put an end to all that and more.

Check Out This Shock Bracelet

It’s called a Pavlok and it’s a behavior modification device that’s going to change your life. It’s designed to keep you from overeating or splurging on things you don’t need until you max out your credit credits. And it can be yours for $199.99 on Amazon. It sure beats putting a rubber band around your wrist and snapping yourself when you think of food.

The product’s creators wanted to introduce a training tool that provides aversive conditioning. In other words, every time customers try doing things like oversleeping or they reach out for a bag of potato chips, the bracelet will send out negative stimuli. But how long would this last before the wearer gets fed up with it and then smashes it to bits on the floor?

The Quest to Break the Habits

The reason people overeat, smoke, or stay in bed all day is because it feels good. But that doesn’t necessarily mean it’s good for their life or long-term longevity. So, the Pavlok conditions their brain to see something pleasurable as something undesirable, so they’ll want to stay away from their unhealthy habits. Think of it this way. If you don’t exercise self-control, you get shocked like cattle.

Aversive therapy isn’t exactly a new concept. It has been used to curb unpleasant habits or even questionable behaviors through the use of intense punishment. In this instance, the punishment comes in the form of a shock which should help you avoid a relapse. Then again, some might find themselves in a state of constant shock until they learn.

Some People Loved It

In theory, the concept of this bracelet is pretty sound. In fact, a lot of customers have left reviews stating they were pretty happy with the way it worked. They felt confident that with the help of the Pavlok, they would be able to successfully control their cravings and lead a normal life. Even those who have suffered from controlled substance issues seemed to find the device beneficial.

It Did What Was Needed

One customer left a review where they stated that they had an issue snoozing too much. But after 4 days, the Pavlok changed his life. So, it seems like the bracelet can seriously take care of a long-term problem in a short amount of time and you probably don’t even have to reuse it once you break your habit. But everyone is different and what works for some might not work for others.

It Wouldn’t Latch On

As amazing as this product might sound, some customers noticed a design flaw on the latch, which made it impossible to keep the Pavlok from providing its therapeutic shock therapy. So, on top of not getting the desired results, customers like this one wound up very frustrated and feeling like they wasted their hard-earned money.

They Wanted It to Work

Another customer was really hoping this would shock his habits away but sadly, the Pavlok failed to provide any form of aversion therapy. It did, however, serve as a source of amusement for his family. So, it seems like the manufacturers may have to take another look at this bracelet and work out the kinks before releasing an updated version.