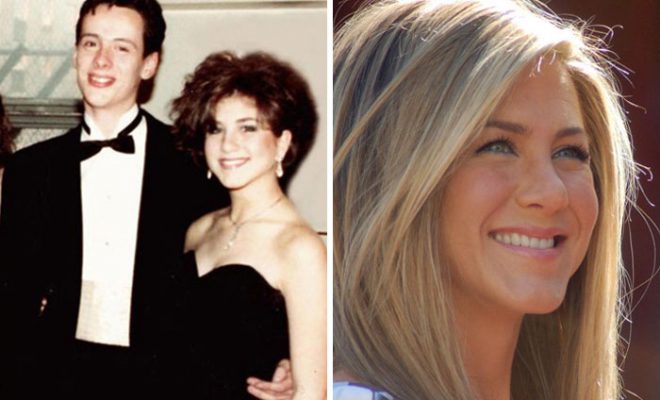 Well, it turns out that celebrities are just like us. They went to high school and attended prom to party, dance, and have an unforgettable time. But no matter how many awards show they’ve attended as adults, they’ll always remember the biggest event in their lives: prom. How could they not when their prom photos are floating around in cyber space? Now some of you might feel like your favorite celebs looked a bit awkward way back when, but they still managed to look like superstars. Take a look and judge for yourself.

We’re totally loving the “fro” on Obama. He also seemed to be glowing on his big day, and who wouldn’t be? He was accompanied by two beautiful girls on each arm. The only thing we’re not sold on is that leafy vine he had around his neck. What’s up with that?

This prom photo proves that Angelina Jolie has always been stunning. We love the simplistic white prom dress and that bejeweled necklace. She looked like a modern-day Cleopatra. Even back then, you could tell she was set to become a star.

RuPaul looked like a freaking rock star at his high school prom. He was like a cross between Michael Jackson in “Thriller,” supermodel model Iman, and a biker! He absolutely looked like he was in charge and rocking that outfit. And we gotta say, we’re totally digging the hair, Ru!

Meryl looked so classy in her prom dress. She was more like a beauty pageant queen with her crown and bouquet. But as one of Hollywood’s leading ladies, she still looks like royalty today. We should all be so lucky to age as gracefully as she has.

Brad looked like a businessman or a character on “Dynasty” in his prom photo. He may have worn a silver and white outfit, but he looked absolutely golden. Funnily enough, he seems to have gotten even more handsome as he’s gotten older. Guess, it’s true what they say. Men age like fine wine.

Jennifer Aniston played Rachel on “Friends,” but she looked more like a Monica in her prom photo. Her hair was super dark! She still looked gorge, though. But one thing’s for sure. She has that special something that has kept her in the Hollywood spotlight.

It’s hard to imagine Bruce Willis not dazzling us with his bald head and amazing acting skills. But at his prom, he had plenty of hair and looked like he had traveled back in time to the Victorian era. We honestly wouldn’t have recognized him with hair!

The former “Dark Angel” star looked breathtaking in her prom dress, which admittedly looked like a maid’s uniform. She still managed to rock it, though! We’re sure that’s why her prom date was grinning in the photo. He knew he was the luckiest guy in his high school, and Jessica’s smile is still as lovely as ever.

Do we even care that Hawkeye from “The Avengers” went to the prom in a pink bowtie and a mullet? Absolutely not! If a guy that hot can make a mullet look good, then he’s definitely worthy of having legions of fans drooling over him.

We were expecting Gaga to don a raw meat dress at her prom, but instead, she surprised us with a light blue dress, a corsage, dark brown hair, and tan skin. Judging from the photo, it doesn’t seem like she had found her unique style yet. Fortunately, she’s so rich now that she can experiment with bold fashion choices and lavish gowns.

The “Brooklyn Nine-Nine” actor didn’t age much since his prom photo was taken. We love the subtle pink undertones in his penguin suit and his beautiful smile. But he seems to have doubled in height and is also a little more serious these days. Still hot, though!